CHICAGO (RNS) — Amaris DeLeon grew up in a religious home but no longer identifies with any particular faith, calling herself “spiritual but not religious.” But she recognizes that religion can still play a role in bringing people together, especially in times of tension and conflict.

“People are desperate for a place to talk about things like politics where it’s not going to get too aggressive,” said DeLeon, a student at the University of North Florida, where she works with the school’s interfaith office. “Everyone has morals, everyone has these codes of value. And I think there’s so much more similarity than difference. We just have to look for it and be intentional about it.” 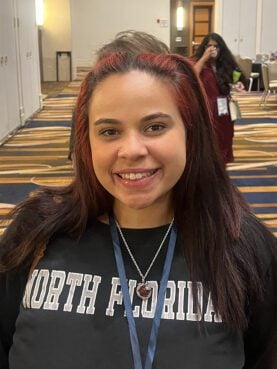 DeLeon was one of about 360 students and educators from 90 colleges and universities who gathered in Chicago over the weekend (Aug. 12-14) for Interfaith America’s annual leadership summit. Held in person for the first time in three years due to the COVID-19 pandemic, the event was a chance to connect with other interfaith leaders and receive training on how to help students from different backgrounds work together.

The dislocations of the pandemic, said Ishan Datey, a leader in the Hindu Student Association at Georgetown University, have meant some interfaith groups have had to go back to basics. Datey said his group has teamed up to host pizza-and-game nights with campus Jewish and Sikh student associations.

The idea was to help students become friends before they talked about interfaith cooperation. 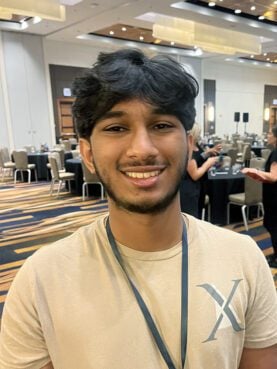 “Fostering interfaith community comes not just from doing interreligious stuff with people of other faiths, but also emphasizing that, that despite our religious difference, we’re still a community,” he said.

“I’m trying to see if we can connect with people from more religious backgrounds,” Yates said.

Eboo Patel, founder and president of Interfaith America, began the event by telling a story about how, as a recent college graduate, he held a potluck with a few friends. That gathering grew over the years and eventually led to the creation of an intentional community called the Stone Soup Cooperative, named after a famed children’s story. 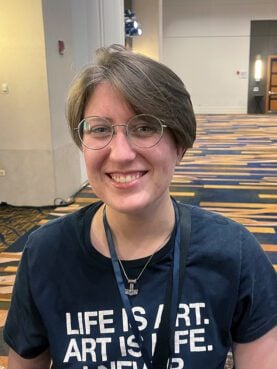 Patel would go on to found an organization in 2002 called Interfaith Youth Core, which focused on training young leaders on college campuses and began holding leadership summits in 2010. The organization, which partners with Religion News Service on a journalism fellowship, has expanded its mission and rebranded itself as Interfaith America in June.

Patel’s experience, he said, has caused him to rethink the metaphor used to describe America’s diversity. Instead of a melting pot, where people leave their old identity behind, he prefers to think of the United States as a potluck, where everyone brings their unique strengths to the table.

“You can bring a dish to the American potluck,” he said. “You can invite other people to join the event yourself. You can nudge the nation toward being more than what it is and closer to what it might be. Not a melting pot. Not a battlefield. But a potluck where everyone is invited. Where everyone is valued.”

After his remarks, Patel led a discussion of nonprofit leaders from different backgrounds to talk about interfaith cooperation and what their faith brings to the American potluck.

Activist and speaker Nisha Anand recounted her father’s family’s experience during the Partition of India and Pakistan by the departing British government in 1947. Her father’s Hindu family was caught on the wrong side of a border drawn by the colonial power to give Muslims their own state. Anand’s family escaped in part because a Muslim family sheltered them from religious violence. 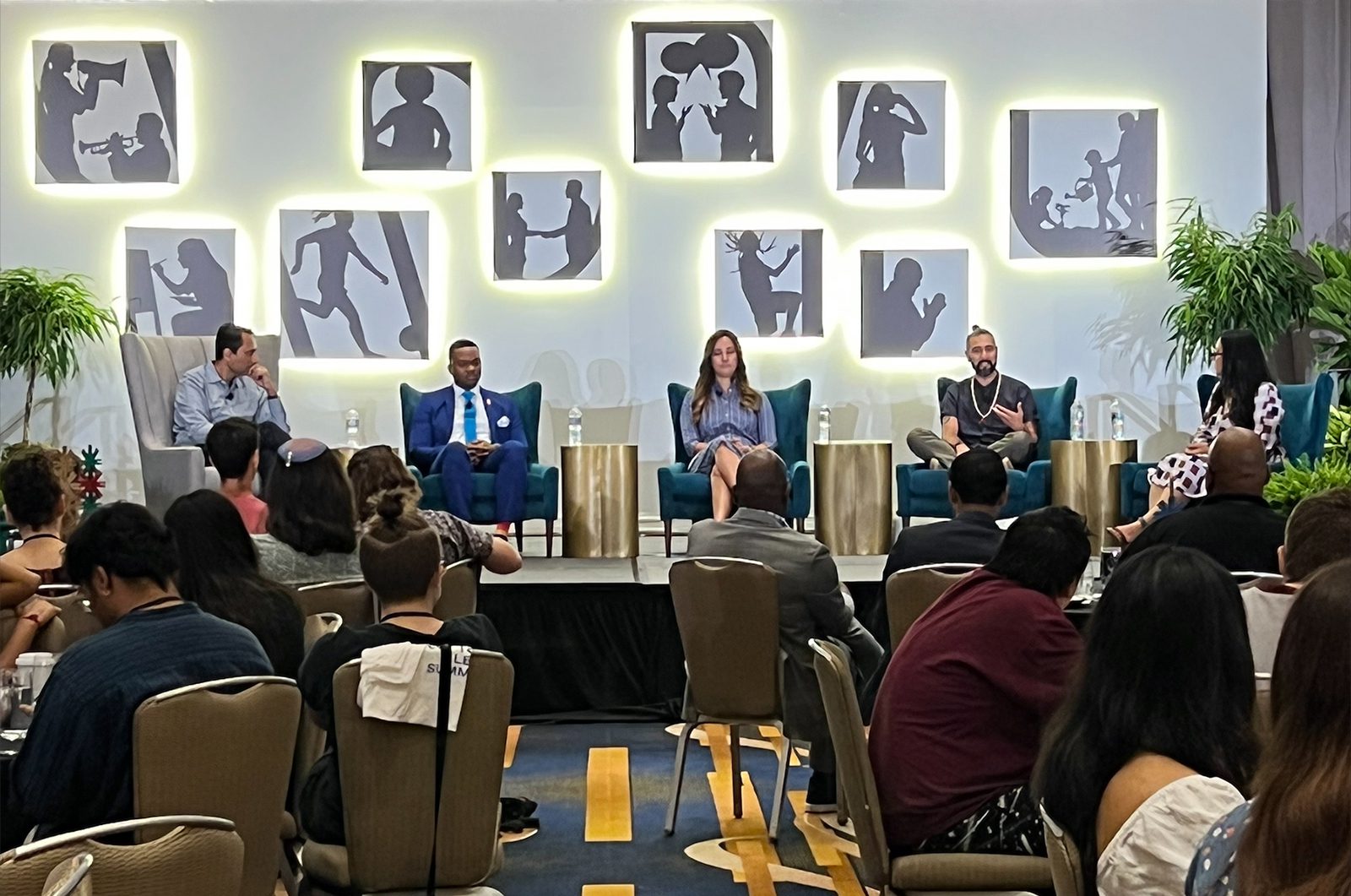 That story, she said, continues to inspire her work at the Dream Corps, a nonprofit that seeks to “bring people together across racial, social, and partisan lines to create a future with freedom and dignity for all.”

Patel credited Anand with a saying that captures what he hopes for Interfaith America: “The awesome people will beat the awful people.”

RELATED: What the history of ‘Judeo-Christian’ can teach us about fighting Christian nationalism

Ulysses Burley III, a former program director for the Evangelical Lutheran Church in America Strategy on HIV/AIDS, talked about how his faith showed him that in his practice as a physician he needed to treat the whole person, not just a disease. (He also pointed out that as the sole Lutheran on the panel, he’d been to a lot of church potlucks.)

Sarwang Parikh of the Buddhist Peace Fellowship spoke about “unconditional friendliness,” an idea inspired by his spiritual practice.

“You meet the stranger with just as much friendliness as you do a beloved friend,” he said.

Allison Josephs, founder of Jew in the City, which works to overcome negative images of religious Jews, shared a saying from Proverbs, about how a righteous person can fall seven times and still get back up. 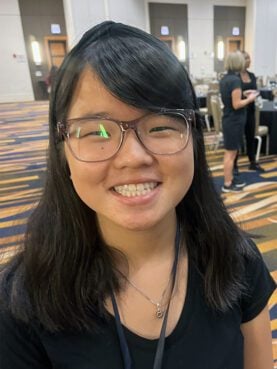 Several student leaders at the event were part of a fellowship program sponsored by the Miller Center of Hebrew College in Newton Centre, Massachusetts, that pairs 26 students from different faith backgrounds with mentors around the country.

Rebecca Chiet, one of the fellows, grew up in a secular household with a Catholic mother and a Jewish father and now identifies as an Orthodox Jew. She said her academic work has looked at the relationship between Jewish traditions. She hopes the fellowship will help expand her vision for interfaith work.

“I thought it’d be a great opportunity for me to broaden like what pluralism means beyond just the Jewish phase and make that connection to my personal life as well,” Chiet said. 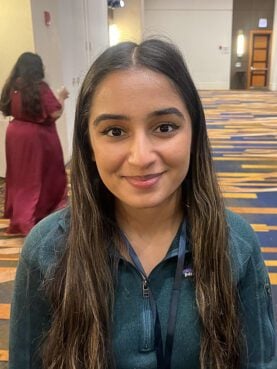 Parveen Mundi, a Sikh student from DePaul University, said she’s already seen the power of interfaith cooperation on her campus. Mundi is part of the student government and has been working to expand kosher and halal meal plan options on campus.

“One thing you don’t realize about college campuses is that interfaith work can really make progress,” she said.

Nikash Harapanahalli, a Hindu student leader from Georgetown, said interfaith work is for everyone, not just “religion fans.” He called it an act of bridge building and “the most meaningful interaction between groups that have very different identities.”

“The real skills that we’re developing here aren’t just faith-based, they are human-based,” Harapanahalli said. “I think we’re learning how to be better people and better people in conversation with others.” 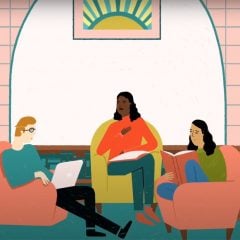 Opinion
Interfaith campus partnerships are building bridges to overcome our divisions
Follow us on Facebook!
Submit your photos to RNS