(RNS) — Richard Dujardin, a lifelong newspaperman who covered religion for more than three decades for The Providence Journal, has died at age 77 from an accidental fall from a bridge.

Dujardin and his wife, Rose-Marie, were on vacation in Milwaukee and headed to an afternoon Mass on Monday (Aug. 15) when a city drawbridge opened up beneath him.

The accident is being investigated.

Dujardin’s death was mourned by former colleagues on the religion beat.

“This is a heartbreaking loss,” said Manya Brachear Pashman, former president of the Religion News Association, which honored Dujardin with its lifetime achievement award in 2015. Dujardin played a key role for RNA, serving as a president and a board member.

“Richard was a veteran of our great profession who never lost his zeal for what we do and its greater purpose,” said Brachear Pashman. “He was a kind soul too, whom even the most curmudgeonly among us wanted to throw their arms around and hug at conferences. He was that much of an inspiration.”

Peter Smith, a longtime religion journalist and another former RNA president, said Dujardin and his wife were faithful supporters of religion reporters, even after his retirement.

“Richard was an exemplary religion reporter, and he was a mentor and friend to me,” Smith said. “Through his leadership in RNA, and through his enthusiastic participation at RNA conferences, which he and Rose-Marie attended faithfully even into his retirement, he encouraged and supported many of us as we sought to follow his example in providing in-depth coverage of religion news.”

David Gibson, a veteran Catholic journalist and director of the Center on Religion and Culture at Fordham University, said Dujardin’s faith strengthened his journalism.

“Richard’s deep faith and extensive knowledge of Catholicism made him especially formidable in reporting on the Catholic Church and the Vatican — the good and the bad,” he said. “His insights and integrity as a Catholic and a journalist meant that he could explain Catholicism to the wider public — and Catholics — and seek out and report the truth, often discomfiting the institutional church. His dual vocations did not conflict but in fact complemented each other, and that’s a lesson that’s more important than ever today, and a legacy that will endure.”

Born in New York City in 1944, Dujardin grew up in Queens and, later, in the village of Merrick on Long Island. After graduating from Chaminade, an all-boys Catholic high school, he attended Fordham University, studying journalism and working for a school newspaper, according to a 2015 profile, written for his lifetime achievement award.

He began working at the Journal in 1966 and remained there for nearly five decades, interrupted only by a three-year stint in the U.S. Navy Reserve, as an officer on an oceangoing tug and the USS Butte, an ammunition ship.

Dujardin applied for the religion writer post at the Journal in 1975 but was turned down. He was offered the job two years later and hesitated for a moment, before realizing that he would always have something interesting to write about. By 1978, he was standing on a roof overlooking St. Peter’s Square as John Paul II was installed as leader of the Roman Catholic Church. Dujardin would return to the Vatican in 2005 to cover the installation of Pope Benedict XVI and again in 2013 for Pope Francis.

“All of us who became religion writers when Pope John Paul II came on the scene were, I think, very fortunate,” he told Smith in 2015. “Because of John Paul’s travels, many of us on the religion beat became the most traveled reporters on our respective staffs (except perhaps for travel writers and those covering sports teams).” 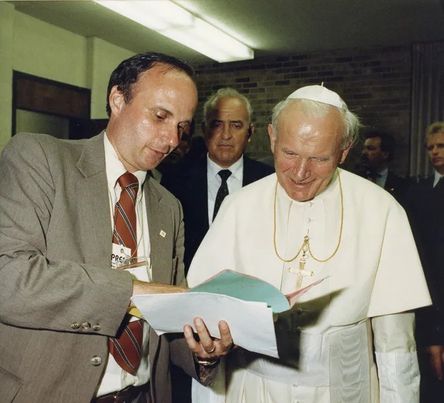 He covered other major religious figures as well, including Billy Graham, Jerry Falwell Sr. and the Dalai Lama, along with the day-to-day life of religious communities and ordinary believers in Rhode Island and southeastern Massachusetts.

When the Journal stopped running a dedicated religion page in 2009, Dujardin become part of a breaking news team. But that did not slow him down.

“Through the vehicle of breaking news,” he said in 2015, “I was able to cover different aspects of religion news on a timely basis. At times, covering the news in that fashion required my using some of my own resources, such as using my own frequent flyer miles to get to the 2013 papal conclave and subsequent installation. But it was all worth it.”

Mark Patinkin, a columnist for The Providence Journal, described Dujardin in a tribute as a devout Catholic who was “journalistically ecumenical,” able to cover people of all faiths — and no faith — with respect and deep listening. Patinkin also wrote about how Dujardin was known for his devotion to getting the story, “the kind of guy who once climbed over fences to get to a car-crash scene.”

“Those of us at the Providence Journal who knew Dick Dujardin, our longtime religion writer, remember him as a low-key guy, always with a bit of a smile, smoking a pipe when that was still allowed, a man without ego in a business where that’s rare,” Patinkin wrote.

Peter Dujardin described his father as a kind soul and “a great family man — awesome husband, father, brother and grandfather. ”

His dad would often remind the family: “Stay close to God.”

Dujardin also loved being a journalist.

“He was a news junky who loved reading the news and reporting on it. He loved to travel and always wanted to learn new things, from the organ to French to researching the best hotel and travel deals,” his son Peter said. “He was a great listener and could regale people with interesting life stories that we will greatly miss. He will be sorely missed.”

Dujardin won a number of the religion beat’s journalism awards, including the Templeton Reporter of the Year Award in 1991as well as three Wilbur Awards.

Dujardin retired in 2013, having never run out of stories to tell.

“Religion writing, as most of us in the field know, is a satisfying experience,” Dujardin said in 2015.

“It allows us to ask important questions that most other reporters usually ignore, allowing us to ask people about their faith lives and to see what really makes them tick. As it is, a lot of motivation behind the good things people do springs from their faith and from the way they perceive God.”

Besides his wife, Dujardin is survived by six children and 12 grandchildren.