(RNS) — This week, President Biden made good on his campaign promise to reduce student loan debt, promising to cancel $10,000 in debt for Americans earning less than $125,000 per year and $20,000 for low-income students who received Pell grants. The measure is a step in the right direction, and, as the president and many Democrats celebrated this political accomplishment, so did my own colleagues and acquaintances on social media.

For much of my social circle, however, it wasn’t much of a moment to celebrate. I am a college-educated Black woman, who answered the call to ministry after I had turned 40. This meant going back to graduate school and taking student loans while still helping my children and other family members with their college tuitions.

As a minister, I have spent much of my time fighting financial predation, from statehouses to the halls of Congress. I work for equity every day, especially for Black women, and I’m intimately familiar with the realities of their finances. Forgiving $10,000 in student loans is an inadequate answer to the needs of Black women and other women of color in America. It speaks to the widening chasm of understanding between white people in America and the experiences of Black and brown Americans. For the latter, the administration’s reduction is at best a non-event, and at worst a traumatic one.

A few numbers will explain why. According to the Center for Responsible Lending, “Women carry about two-thirds of the $1.7 trillion of federal student debt, with Black women are more than twice as likely as white men to owe more than $50,000 in undergraduate student loan debt.” In addition, recent research from the U.S. Department of Education indicates that, “after 20 years in repayment, a Black borrower still owes 95% of their original balance, and Black women’s balances increase over time.”

A separate report from CRL and the National Consumer Law Center showed that “cancellation to $50,000 would render more than 75% of federal borrowers debt-free.” It would wipe out loans for 36 million borrowers, according to recent data from the Department of Education, including more than 3 million of the 4.5 million borrowers who have been in repayment for more than 20 years. In other words, the Biden administration’s limit on loan reductions falls well short.

Pardon me, then, for not feeling compelled to celebrate. In fact, despite President Biden’s casual mention of disparities in student loan debt among Black and Brown borrowers, his announcement was triggering. It reminded me of a word Ta-Nehisi Coates used repeatedly in his 2014 essay, “The Case for Reparations”: Plunder. “When enslaved Africans, plundered of their bodies,” Coates wrote, “plundered of their families and plundered of their labor, were brought to the colony of Virginia in 1619 …”

Plunder is the reality that I wake up to every day as a Black woman trying to create change for my community. After centuries of plundering of Black and brown bodies, this nation must own the generational economic plundering sustained by Black and brown borrowers in this country, rooted in official economic policy. This cannot be remedied by $10,000 in student loan debt cancellation.

The inequity in economic advantage is seen everywhere, not only in loan debt. Every year we commemorate Equal Pay Day for women, measuring the pay differential between men and women. This year Equal Pay Day fell on March 15, marking 74 extra days that women must work to catch up to what the average man made by Dec. 31.

We cannot address equitable loan forgiveness when we have yet to address pay inequity. It is not enough to talk about economic inequality and then move along with little to no action, as the president did.

As a Black woman in ministry, I carry a double injury. Thanks to the oppressive tactics of white supremacy and its offspring, patriarchy, men are often encouraged to enter ministry in their teen years. The average woman more often accepts her call as a second, or third, career, acquiring student loan debt later in life, at a time when we are shouldering multiple financial responsibilities, often for both our dependents and our parents. We bear this weight while usually earning smaller salaries than our male counterparts.

While the president celebrated his political win, I, and many Black women, cried at the reminder of our inability to shield our children and ourselves from the tentacles of debt.

There is a Judeo-Christian concept known as jubilee. The Bible’s Book of Deuteronomy instructs us that there should be a time that all of those held captive by debt should be released by having all of their debts forgiven. This week in “Black August” — Black August, 403 years since we were initially plundered on this soil — has been a painful reminder of how much work this nation and the Church must do to make all of us who have been plundered whole. 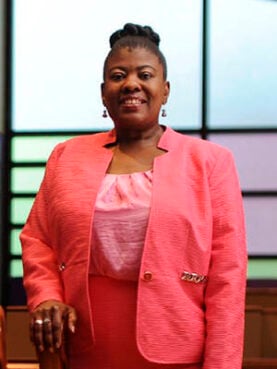 To those, like me, saddled by debt acquired to attain the alleged “American dream” of education: I see you. Let’s keep working toward jubilee and liberation for all who are held captive.

(The Rev. Cassandra Gould serves as the senior strategist on Faith in Action’s Faith Leadership Strategies Team and is an associate pastor at Metropolitan A.M.E. Church in Washington, D.C. The views expressed in this commentary do not necessarily reflect those of Religion News Service.)