(RNS) — As the son of an economist, I’ve got to say that the Almighty isn’t much of one — at least, not if you judge by the beginning of the 15th chapter of the Bible’s Book of Deuteronomy.

That’s where God gives Moses the law concerning the shmita year, when there’s to be a sabbatical break for economic life in the Holy Land. Shmita translates into English as “release” — here’s how the King James Version puts it:

At the end of every seven years thou shalt make a release. And this is the manner of the release: Every creditor that lendeth ought unto his neighbour shall release it; he shall not exact it of his neighbour, or of his brother; because it is called the Lord’s release. Of a foreigner thou mayest exact it again: but that which is thine with thy brother thine hand shall release.

RELATED: Bringing the Torah’s ‘Sabbath of the land’ to Jewish American farmers

Faced with a situation in which it became increasingly hard for poor people to borrow, rabbinic authorities around the time of Jesus’ birth created a legal instrument called a prosbul that permitted shmita debt forgiveness to be abrogated in favor of loans being enforced by the courts.

Which brings us to the Lord’s Prayer. 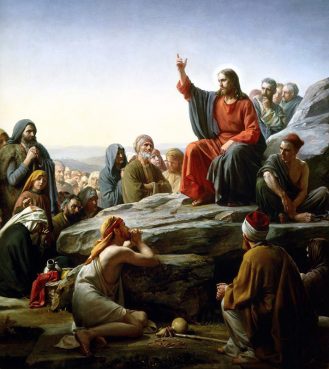 “The Sermon on the Mount” by Carl Bloch, created in 1877. Image courtesy of Creative Commons

In both Gospel versions, the Greek verb for “forgive” is aphiēmi, which means “release.” I’d say this refers to the shmita — God’s mandate to release those who are indebted to us. In other words, in Jesus’ model prayer we ask for release from what we owe God in the same way that those who owe us have to be released every seven years.

As biblical scholar Mark Biddle of the Baptist Theological Seminary at Richmond points out in an article published last month, Jesus may well have been taking a shot at the prosbul dodge. Given his penchant for perfectionist moral rules — “Be ye perfect,” he says in the Sermon on the Mount — it’s plausible that he would urge perfect people to make the loan regardless.

Lurking in the future, of course, was the Christian theology of atonement, under which Jesus’ sacrifice enables human beings to pay off the debt incurred through original sin that we could not pay off on our own. When it comes to the spiritual economy, that’s shmita to the max.

Back in the humdrum economy, President Joe Biden’s announcement of student loan forgiveness last week has elicited a good deal of criticism, both from economists who think that supply and demand should rule the policy roost and religionists who believe it’s immoral to take out a loan and not pay it back.

My father, may he rest in peace, grew up during the Depression and so acquired a healthy skepticism of free market ideology. His was the institutionalist economics of the University of Wisconsin, where he was an undergraduate. It taught that government rules and regulations make all the difference between a capitalism that is healthy and one that is not.

As it turns out, Biden’s student loan forgiveness plan is structured in a way that provides most of the forgiveness to those debtors most in need. That it comes at the end of a shmita year is no doubt a coincidence. But I’m willing to bet that the Almighty, along with my father, would approve.