(The Conversation) — Pope Francis spent three days in Kazakhstan, starting Sept. 13, 2022, to attend the Seventh Congress of World and Traditional Religions. The pope met with religious leaders, called for increased religious freedom and condemned religious justifications for war and violence.

The pope’s appeal for peace in the former Soviet republic of Kazakhstan was especially significant in light of Russia’s ongoing war in Ukraine, which he called “senseless.”

As a scholar who has spent over 30 years studying Christianity in the former Soviet Union, I’ve followed the pope’s visit with keen interest. He has chosen to highlight the causes of peace and religious freedom – matters of particular concern to Kazakhstan’s Catholic minority.

Although Kazakhstan is predominantly Muslim, over 4 million Kazakhstanis profess Christianity. This represents over a quarter of the country’s total population of 19 million. Over 80% of Kazakhstan’s Christians are ethnic Russians.

Christian missionaries brought their gospel to Central Asia as early as the third century after Christ. By the seventh century, Christians had established important centers along the Silk Road, the trading routes from China to Constantinople.

The Assyrian Church of the East, a branch of Christianity that developed in the Persian Empire, had a significant presence on the territory of Kazakhstan well into the 12th century.

After the Muslim conquest of Central Asia in the seventh and eighth centuries, Christianity slowly lost influence and began a long decline. In the 14th century, Franciscan missionaries from Italy briefly created a diocese in today’s southeastern Kazakhstan.

In the 17th century, Russia began its expansion into Siberia and the northern Kazakh steppes. Cossack soldiers, who belonged to the Russian Orthodox Church, established military outposts, where they also practiced their faith. In addition, the “Old Believers” – religious dissenters who broke with the official Orthodox church over ritual questions – fled to Siberia and northern Kazakhstan to escape persecution. Old Believers continue to maintain their communities in eastern Kazakhstan’s Altay Mountains.

The Russian conquest of Central Asia in 1860s and 1870s further increased the numbers of Christian settlers in the region. In 1871, the Russian Orthodox Church established the Diocese of Turkestan, which included much of today’s Kazakhstan. The diocesan center was the town of Vernyi, which is now called Almaty and is Kazakhstan’s largest city.

The Russian Orthodox Church also tried, with limited success, to convert the nomadic Kazakhs, who practiced Islam. In 1881, it created a special missionary society to preach the gospel to the Kazakhs. The mission translated the Bible and some liturgical texts into Kazakh. Despite these efforts, most Kazakhs remained Muslim.

The Bolshevik Revolution of 1917, which overthrew the imperial government, ushered in a period of severe anti-religious persecution. Most churches and mosques were closed by 1939. The Soviet authorities also forced the Kazakh nomads to settle in collective farms, destroying their traditional way of life.

Kazakhstan became the site of a chain of collective labor camps housing political prisoners. In campaigns of ethnic cleansing, the Soviet government deported thousands of Poles and Germans to Kazakhstan in the 1930s and 1940s. Most of Kazakhstan’s small community of Catholics, which numbers about 125,000, descends from these deportees. 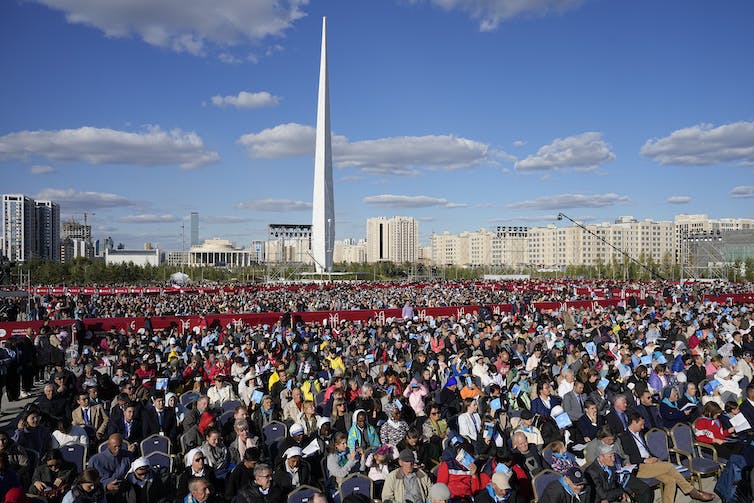 People attend a Mass presided over by Pope Francis at the Expo Grounds in Nur-Sultan, Kazakhstan, on Sept. 14, 2022.
AP Photo/Alexander Zemlianichenko

With the dissolution of the USSR in 1991, Kazakhstan became an independent country. According to the latest census, conducted in 2009, about 70% of the population professes Islam. Christianity, at 26%, is the second-largest religion.

Pope Francis specifically called for Kazakhstan to increase religious liberty, which he described as a “basic, primary and inalienable right.” The human rights organization Forum 18 reported that in the calendar year 2021, Kazakhstani authorities convicted at least 114 people and five organizations for exercising their religious faith without state permission. Such convictions usually result in heavy fines. For example, police raided the worship service of an unregistered Baptist congregation in the town of Oral in January 2021. Church leaders each had to pay one month’s average wage for the violation.

Despite their significant numbers, Christians – especially those in smaller denominations – have experienced persecution. In 2011, Kazakhstan adopted a law on religion that instituted a laborious process of registration for religious organizations. According to the U.S. Office of International Religious Freedom, Kazakhstani authorities arrest and imprison people for their religious beliefs. For example, in 2019 three pastors of Almaty’s New Life Pentecostal Church were each sentenced to prison terms ranging from four to five years for their religious activities.

For their part, Kazakhstan’s leaders have been more concerned about ensuring the security and stability of the state than advancing individual religious liberty. They have preferred to favor what they consider to be traditional world religions such as Hanafi Sunni Islam, the Russian Orthodox Church, Catholicism, Lutheranism and Judaism. To this end, in 2003 the president of Kazakhstan created the Congress of World and Traditional Religions.

Pope Francis chose this venue to voice his concerns about the controversial topics of peace and of religious freedom. Time will tell whether or not his appeals have any success.

(J. Eugene Clay, Associate Professor of Religious Studies, Arizona State University. The views expressed in this commentary do not necessarily reflect those of Religion News Service.)