ZION, Illinois (RNS) — It was a challenge of biblical proportions.

Two men, both claiming to be divine figures, would pray to God to show the truth of their claims. One was John Alexander Dowie, a Christian evangelist and faith healer who founded the city of Zion in northeastern Illinois. His challenger: Mirza Ghulam Ahmad, the founder of the Ahmadiyya Muslim Community.

The first to die, lost.

“A genuine Elijah would jump at such a proposal,” read an article that appeared in The New York Times in 1903, not long after Ghulam Ahmad issued the challenge in response to Dowie’s incendiary remarks about Islam and other religions.

Earlier, Dowie had declared himself “Elijah the Restorer.”

RELATED: Power in numbers on display as Ahmadi Muslim spiritual leader tours US 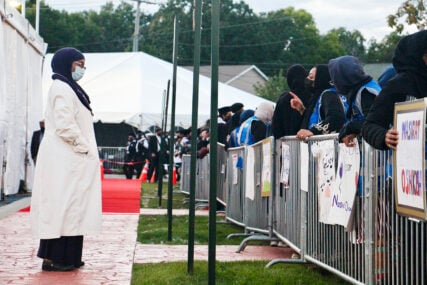 The article — one of many published at the time in newspapers across the country about the so-called “prayer duel” — recalled how the biblical prophet Elijah had challenged the prophets of Baal to call down fire from heaven to burn their respective sacrifices. Elijah was outnumbered. He had doused his sacrifice in water. And yet it was his prayer, in the biblical account, that was answered.

Ghulam Ahmad was in poor health and older than Dowie, who — by all accounts — never directly accepted the prayer duel. Yet it was Dowie who died a year before Ghulam Ahmad, abandoned by his family and all but a few of his most devoted followers, the city he founded in dire financial straits.

The story has been repeated for generations among the Ahmadiyya Muslim Community, a small revival movement within Islam who believe Ghulam Ahmad to be a promised messiah and mahdi, or reformer.

Now the community has a home in the city at the center of it all.

This weekend, the Ahmadiyya Muslim Community will inaugurate its first mosque — named “Fath-e-Azeem,” or “great victory” — in Zion.

The victory signified in the name of the mosque “is not the victory of any religion,” said Mirza Masroor Ahmad, the khalifa, or caliph, of the Ahmadiyya Muslim Community. The victory, he said, is to communicate “who is the true man of God,” between Dowie and Ghulam Ahmad.

“We should respect all the religions,” Mirza Masroor Ahmad told Religion News Service. 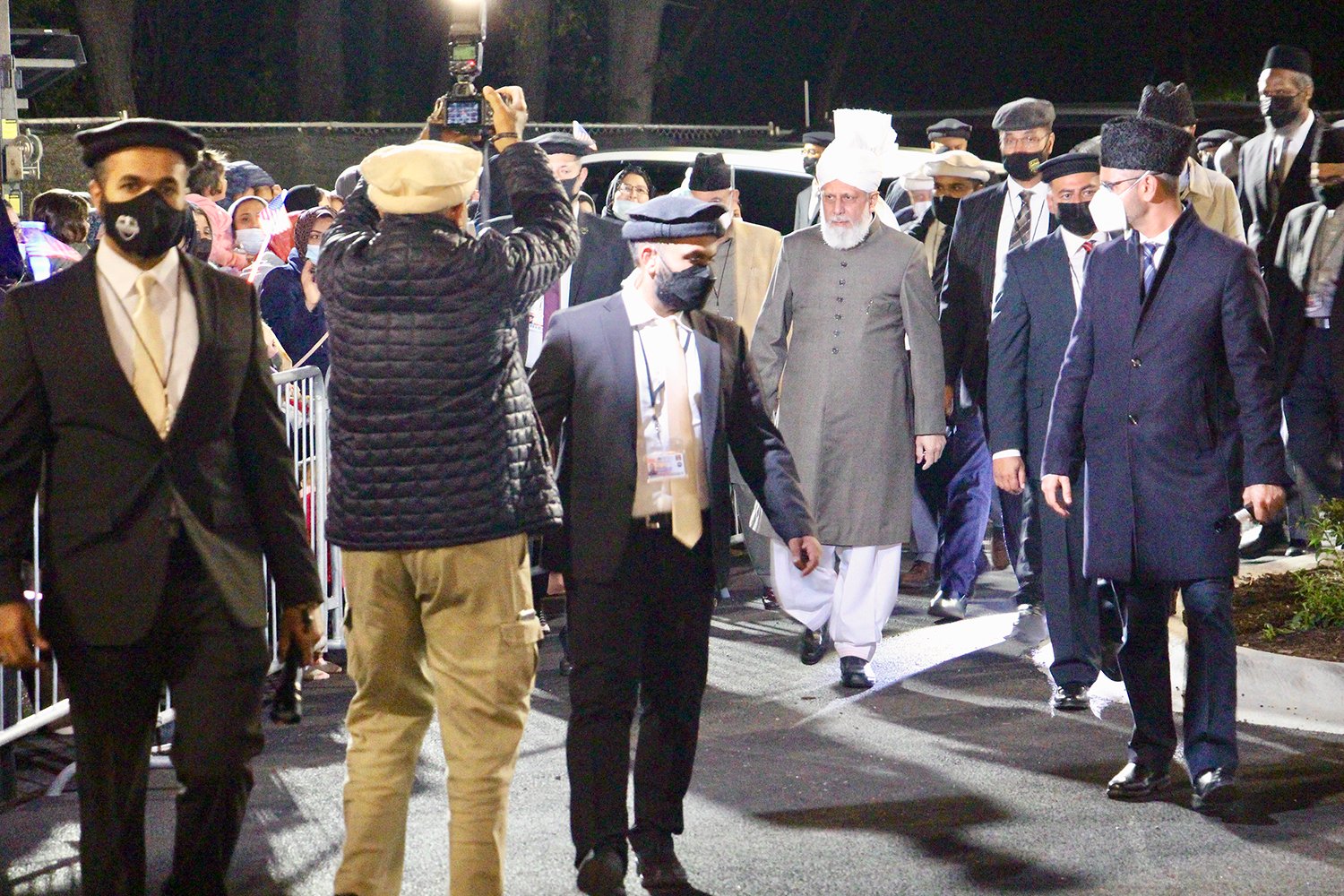 “This is what the teaching of the Quran says, and this is what the founder of the Ahmadiyya movement said — that you should respect each other. And the main purpose of the human being is to worship Allah. So whichever religion you hold, you can practice according to that, but don’t use filthy or abusive language against other people.”

The spiritual leader of the Ahmadiyya Muslim Community, which claims more than 20 million members worldwide, traveled from the movement’s headquarters in the United Kingdom to inaugurate the mosque alongside leaders from the city and other faiths.

Mirza Masroor Ahmad said he often travels to inaugurate new mosques around the world, but the history of Zion makes Fath-e-Azeem “special.”

The Zion chapter of the Ahmadiyya Muslim Community started with about 50 people in 1984.

Nadia Shams, propagation secretary for the chapter’s women’s auxiliary, remembers a time before the chapter even had its current mission house. Her father was its first president, and members would meet at their little house in nearby Waukegan, Illinois.

The current mission house is so small, Shams said, the Zion chapter has had to rent or borrow space to hold community events. Meantime, its membership — about 150 people — has nearly tripled in size since its earliest days, she said.

“We had humble beginnings, so this is huge for us,” Shams said.

The new mosque has a prayer room that can accommodate up to 310 people and a basement that can be configured to host all kinds of events. 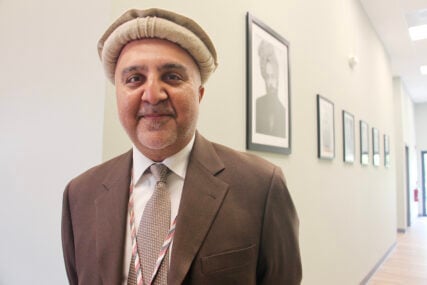 On Monday, blue paper dots marked out the appropriate social distance for worshippers on the prayer room’s plush blue and gold carpet. Gold calligraphy circled the inside of the dome in its ceiling: “There is no God but Allah, and Muhammad is his messenger.”

Signs of preparations dotted the property as the community made it ready for the arrival of Mirza Masroor Ahmad that evening and the inauguration of the mosque that weekend. In the hallway, a mop leaned against a wall beneath photographs of Ghulam Ahmad and his five successors.

Outside, adding to the festival-like atmosphere, white tents were set up in the parking lot to house security and COVID-19 checkpoints for the week, as well as to act as overflow space for prayer and meals for volunteers and visitors.

More than 1,000 people turned out later that day to welcome Mirza Masroor Ahmad, according to the Ahmadiyya Muslim Community.

The crowd, separated by gender, chanted “Allahu akbar,” or “God is great,” as their spiritual leader walked across the parking lot before disappearing inside the mosque to lead prayer. Children waved tiny American flags at the end of light-up wands and sang “Fath-e-Azeem” in a song set to the tune of “This Is the Day,” more commonly heard in Christian Sunday school settings.

Shams had volunteered as security for the event. Even with her back to the khalifa as she held back the crowd, she said she was surprised to find herself moved to tears. 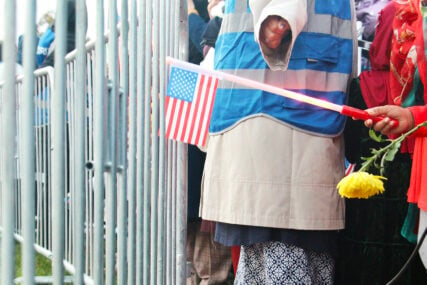 Illuminated American flags were waved by members of the crowd as they waited for the arrival of Mirza Masroor Ahmad outside the new mosque in Zion, Illinois. RNS photo by Emily McFarlan Miller

The women’s auxiliary passed its goal to raise $1.2 million in less than a year, according to its national president, Dhiya Bakr. Tears shone in her eyes as she remembered how members of the women’s auxiliary handed her cash, checks, even the jewelry they were wearing when she spoke to them about building the mosque in Zion.

Bakr said she believed Dowie was on the “right track” when he set out to build a “city of God.” He just went off the rails when he alienated other people and other faiths.

She moved to Zion about 22 years ago, wanting to see the vision of a city of God come to life. Islam, she believed, could help nurture that vision.

Now, in a town literally built around the Christian Catholic Apostolic Church Dowie founded, Fath-e-Azeem Mosque sits within a block of two churches — one Assemblies of God and the other Fundamental Baptist — and a Kingdom Hall of Jehovah’s Witnesses. 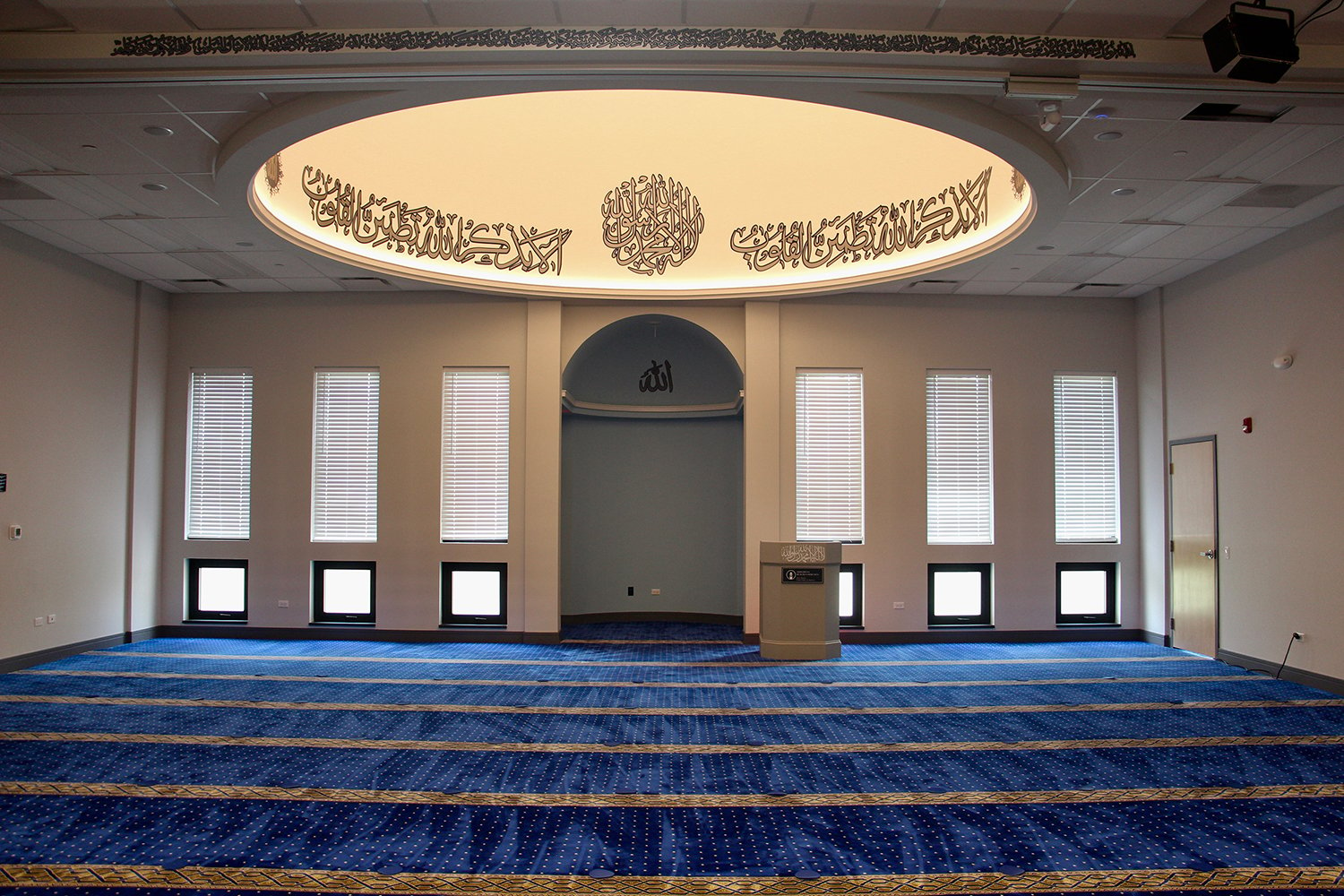 Illuminated by a dome over the front center of the room, the prayer room of the new Fath-e-Azeem Mosque features bright striped carpets under the central dome. RNS photo by Emily McFarlan Miller

“I hope that Zion and the Ahmadiyya Muslim Community will be that city — that beacon of light that draws people here — not just to see the mosque, but to feel God in the city and some peace and contentment from all the struggle that folks have in their own personal world,” Bakr said.

There was a time when some Zion residents feared Ahmadi Muslims wanted to “take over the city” because of what had happened between Dowie and Ghulam Ahmad, according to Zion Township Supervisor Cheri Neal.

These days, Neal said, the story of the prayer duel isn’t very well known in Zion.

But the Ahmadiyya Muslim Community is.

And, she said, “if you know any of their hearts, you know that it’s not about taking over, it’s about joining in.”

As long as Neal can remember, the Zion chapter has been a “key partner in our community,” collecting backpacks for schoolchildren, organizing basketball tournaments, volunteering at a food pantry and joining community dialogues about race.

On “everything that we’ve ever done,” she said, “they’ve always been at the table, and, with my Christian background, there were times when I felt like their organization is more Christian than some Christian organizations just because they really do practice what they preach.”

It’s “such a quintessential American story,” according to Amjad Mahmood Khan, national spokesperson for the Ahmadiyya Muslim Community USA.

The new mosque includes a permanent exhibit about the prayer duel, with videos introducing Islam and the Ahmadiyya Muslim Community. 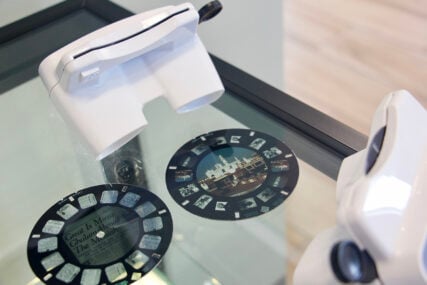 Toy camera viewers sit next to reels of photographs and news clippings at the new Fath-e-Azeem Mosque in Zion, Illinois. RNS photo by Emily McFarlan Miller

In the exhibition, interactive touchscreens and View-Master style viewers display historic photos and about 160 articles about the challenge from newspapers across the country. Display cases hold copies of publications started by Dowie and Ghulam Ahmad and Qurans translated into various languages by the Ahmadiyya Muslim Community.

One video shares polemical remarks Dowie had made about people of other faiths, including remarks that had caught the attention of Ghulam Ahmad: “Islam must go … Mohammedanism must be destroyed.”

The inauguration of a mosque in the city Dowie founded is “the symbolic turning of the page on some of that original history,” Khan said.

The mayor will be there to welcome Mirza Masroor Ahmad, the great-grandson of Ghulam Ahmad. The church across the street is allowing the mosque to use its parking lot.

The “great victory” of Fath-e-Azeem, Khan said, is a victory of “prayer over prejudice, light over darkness, love over hate.”

“This is something everyone can celebrate. This is exactly what makes America so special,” he said.

RELATED: I wear hijab. I also respect any woman who chooses not to. (COMMENTARY)

This article has been updated to restore a full quote from Mirza Masroor Ahmad. 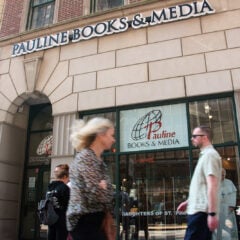 News
‘Media nuns’ say goodbye to sweet home Chicago after more than 40 years
Follow us on Facebook!
Submit your photos to RNS