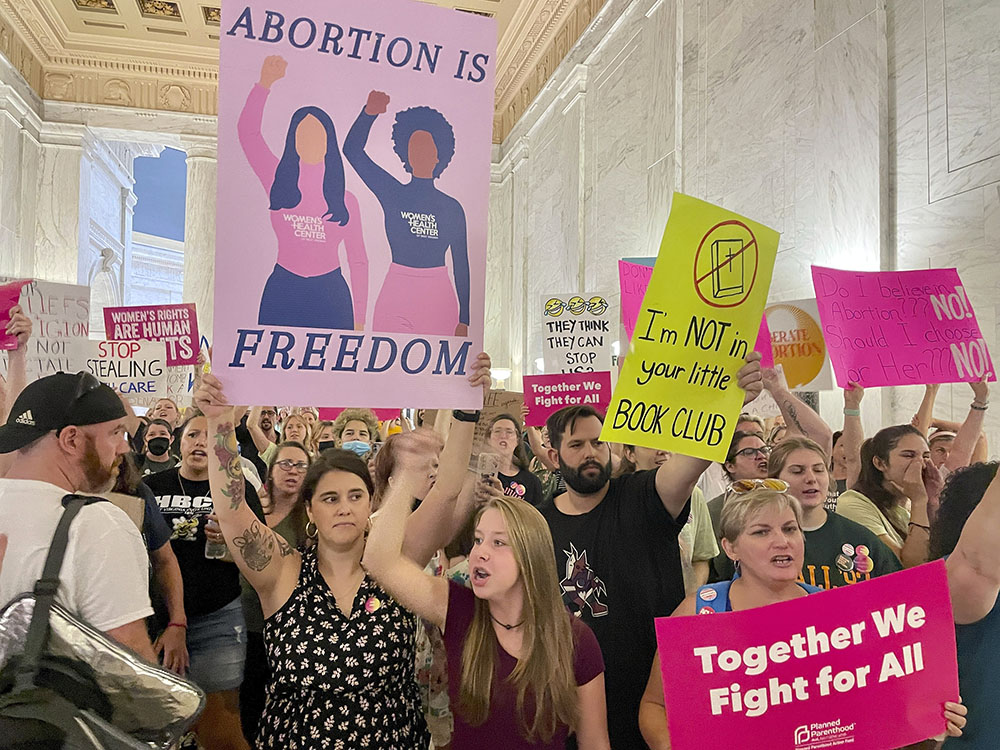 FILE – Abortion rights protesters chant outside of the West Virginia Senate chambers prior to a vote on an abortion bill, July 29, 2022, in Charleston, W.Va. (AP Photo/John Raby)

WASHINGTON (RNS) — After the U.S. Supreme Court overturned Roe v. Wade in June, many Democrats despaired at the anti-abortion movement’s victory but expressed hope at the raucous protests by abortion-rights advocates and polls showing Americans outraged by new restrictions on abortion. Such frustrations, some argued, could help propel Democrats to victory come November.

“This cruel ruling is outrageous and heart-wrenching,” House Speaker and Democratic Rep. Nancy Pelosi said in June. “But make no mistake: The rights of women and all Americans are on the ballot this November.”

Yet, four months later, operatives who work with conservative Christians, whose political strategy has long centered on abortion, appear unconvinced that liberal passions will turn the tide.

“I don’t think the abortion issue’s working for them anymore,” said Ralph Reed, head of the conservative Faith and Freedom Coalition, referring to Democrats. His group still lists candidates based on their views regarding abortion, he said, and outlines their stances on abortion legislation in messages to voters.

The debate hints at growing uncertainty surrounding how religious voters and others will engage with abortion policy as they head to the polls next month, when millions will cast ballots in abortion-related referendums and choose between candidates who have staked out firm positions on all sides of the issue.

Some campaign commercials are trying to make a candidate’s stance on abortion a litmus test for faith. In Georgia, a recent advertisement produced by the National Republican Senatorial Committee argued that Democratic incumbent Sen. Raphael Warnock’s support for abortion rights (Warnock, a minister in Atlanta, identifies as a “pro-choice pastor”) is out of step with Christianity. 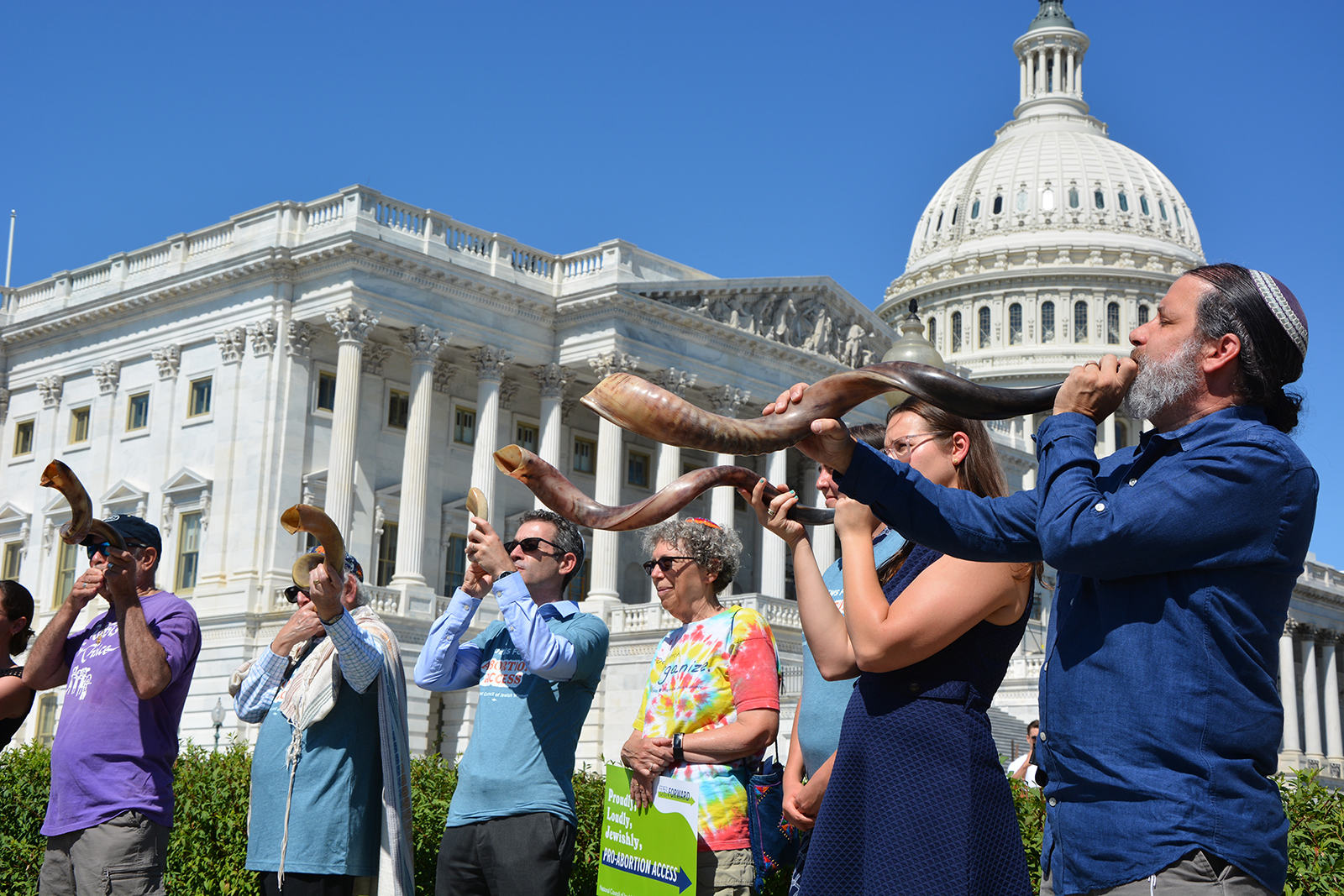 Shofars are blown outside the U.S. Capitol on Sept. 14, 2022, during an abortion-rights event organized by the National Council of Jewish Women. RNS photo by Jack Jenkins

But support for abortion rights has become increasingly visible in faith circles. Groups aligned with liberal wings of several religions have hosted rallies, protests and demonstrations with lawmakers. The National Council of Jewish Women met with Second Gentleman Douglas Emhoff, who expressed support for their cause. Plaintiffs in lawsuits against abortion bans in states such as Kentucky, where a referendum on the issue is on the November ballot, have cited their faith as a reason to oppose the restrictions.

At least one group, Catholics for Choice, is appealing to voters directly, unveiling a new guide that shows voters how to evaluate candidates and encourages supporters to cast ballots in support of abortion rights. They stress the importance of referendums on the issue, which will appear on the ballot in California, Michigan, Vermont, Nevada, Kentucky and Montana.

“Pro-choice Catholics don’t just exist, we are the majority,” reads a line from the voter guide.

That claim is borne out in a recent 19th News/SurveyMonkey poll conducted in September, which found that majorities of Catholics (57%), Orthodox Christians (73%), Jews (73%), Muslims (63%), Buddhists (77%), Hindus (67%) and non-evangelical Christians (64%) all said abortion should be legal in all or most cases. Only evangelicals and members of the Church of Jesus Christ of Latter-day Saints expressed majority support for making abortion illegal in all or most cases (65% and 54%, respectively). 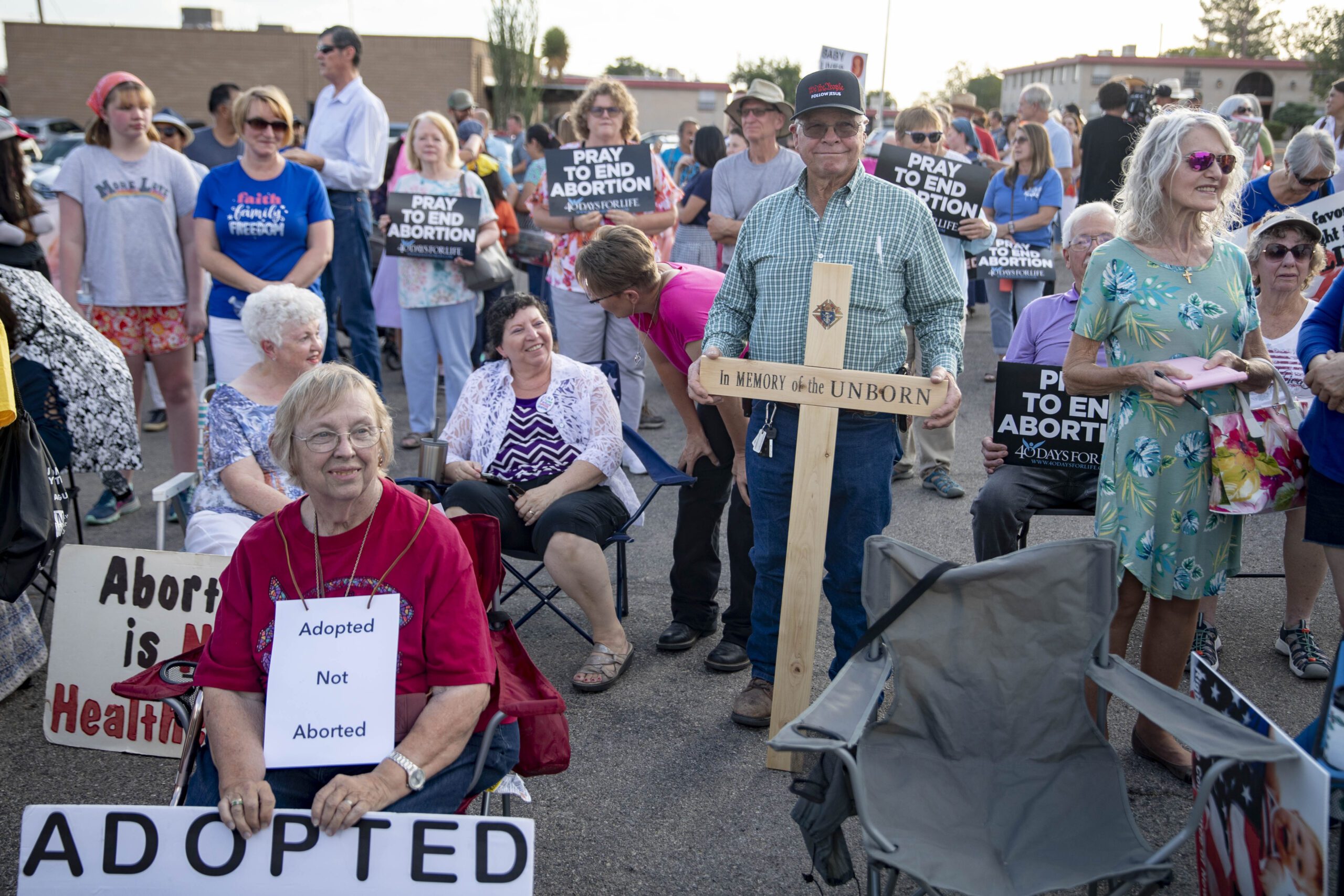 Anti-abortion advocates listen to various speakers during the Emergency Pro-Life Rally for New Mexico in Las Cruces, N.M., on Tuesday, July 19, 2022. Anti-abortion activists from across the country converged in southern New Mexico on Tuesday to protest relocation plans by the Mississippi clinic at the center of the court battle that overturned Roe v. Wade, but New Mexico’s governor vowed not to back down from her support for access to abortions. (Meg Potter/The Las Cruces Sun News via AP)

Party seems to be a stronger driver than faith on the issue. A survey released this month by the Kaiser Family Foundation found that 45% of singled-out born-again or evangelical Christians believed the decision to overturn Roe made them more likely to vote in November. But only 39% of evangelicals who call themselves Republican agreed, compared to 56% of evangelical Democrats.

That’s less than Democrats overall (69%), but it gives Democrats hope that Republican appeals to evangelicals on abortion will go unheard.

But questions remain as to whether concern for abortion rights will outweigh other factors. A New York Times/Siena College poll released last week showed likely voters were far more inclined to cite concerns about the economy (26%) as impacting their vote than abortion (5%).

Faith groups that support abortion rights are also typically smaller and more sparsely funded than their anti-abortion counterparts, and while Planned Parenthood has its own faith advisory board, a representative said the group has no immediate plans for robust faith outreach to voters ahead of the midterms. 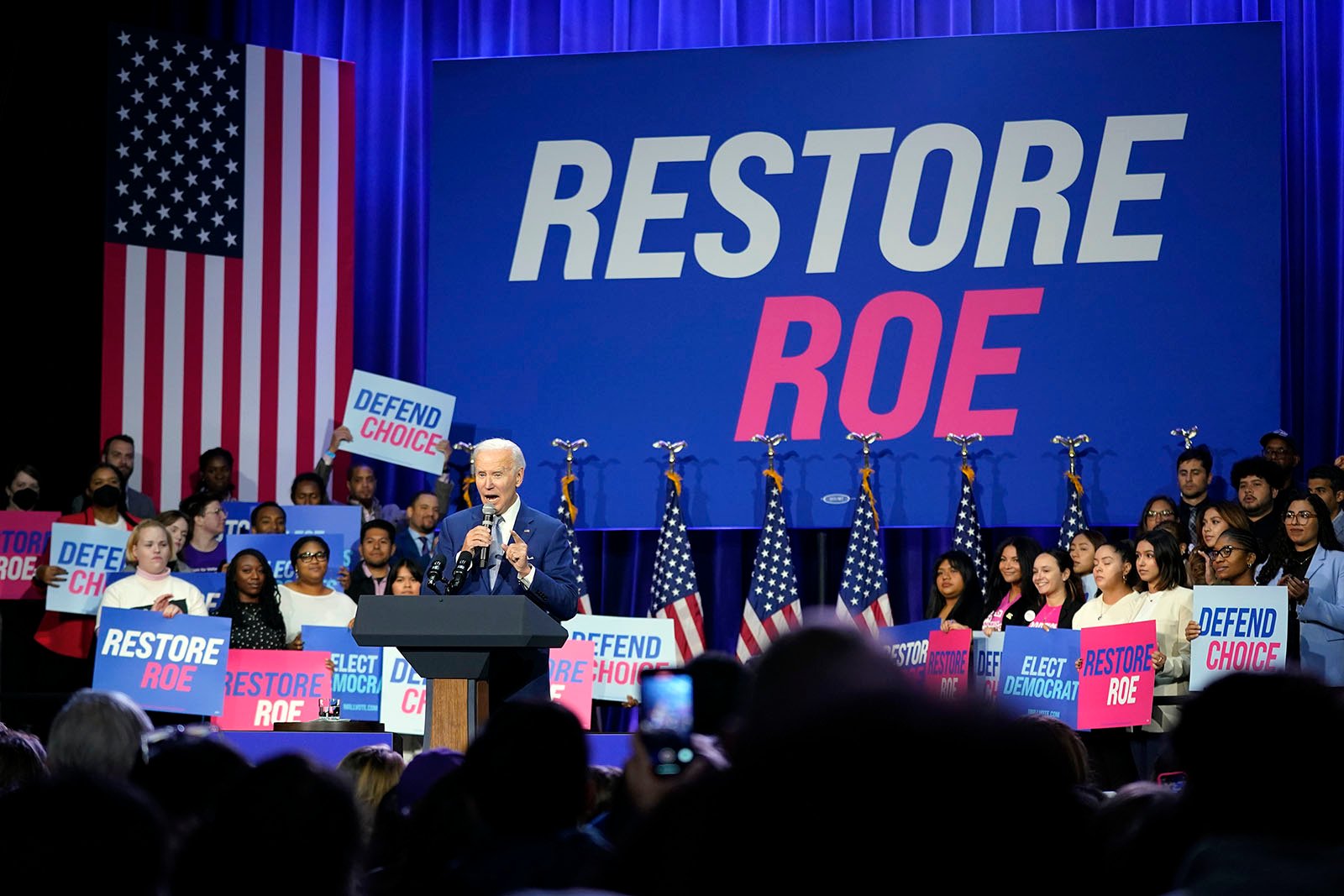 Some Democratic leaders have also been shy about linking faith and abortion. In an Oct. 18 speech in Washington in which he vowed to sign legislation making abortion legal nationwide if his party retains control of Congress, President Joe Biden made no mention of his own Catholic faith. Neither did the woman who introduced him, Dr. Jennifer Villavicencio, an obstetrician–gynecologist who serves on the board of Catholics for Choice.

RELATED: A devout Catholic, she opposed abortion. Now she performs them.

Biden and other Democrats may be wary of raising the ire of Catholic bishops, who have staunchly opposed abortion liberalization laws this election cycle. In Michigan, where Proposition 3 would codify a broad right to “reproductive freedom” in the state constitution, Archbishop Allen Vigneron of Detroit preached a sermon earlier this month celebrating the overturning of Roe v. Wade and calling on his fellow faithful to oppose the ballot measure.

“God invites us to say ‘No,’ to Proposition 3,” Vigneron said, according to the Detroit News.

Vigneron joined other Michigan bishops in signing a letter calling the proposal the “most extreme proposal concerning abortion this state or country has ever seen.” The letter was mailed to approximately 236,000 Michigan Catholic households, according to Catholic News Service, and the state bishops’ conference has since set up a website urging people to vote against the measure. 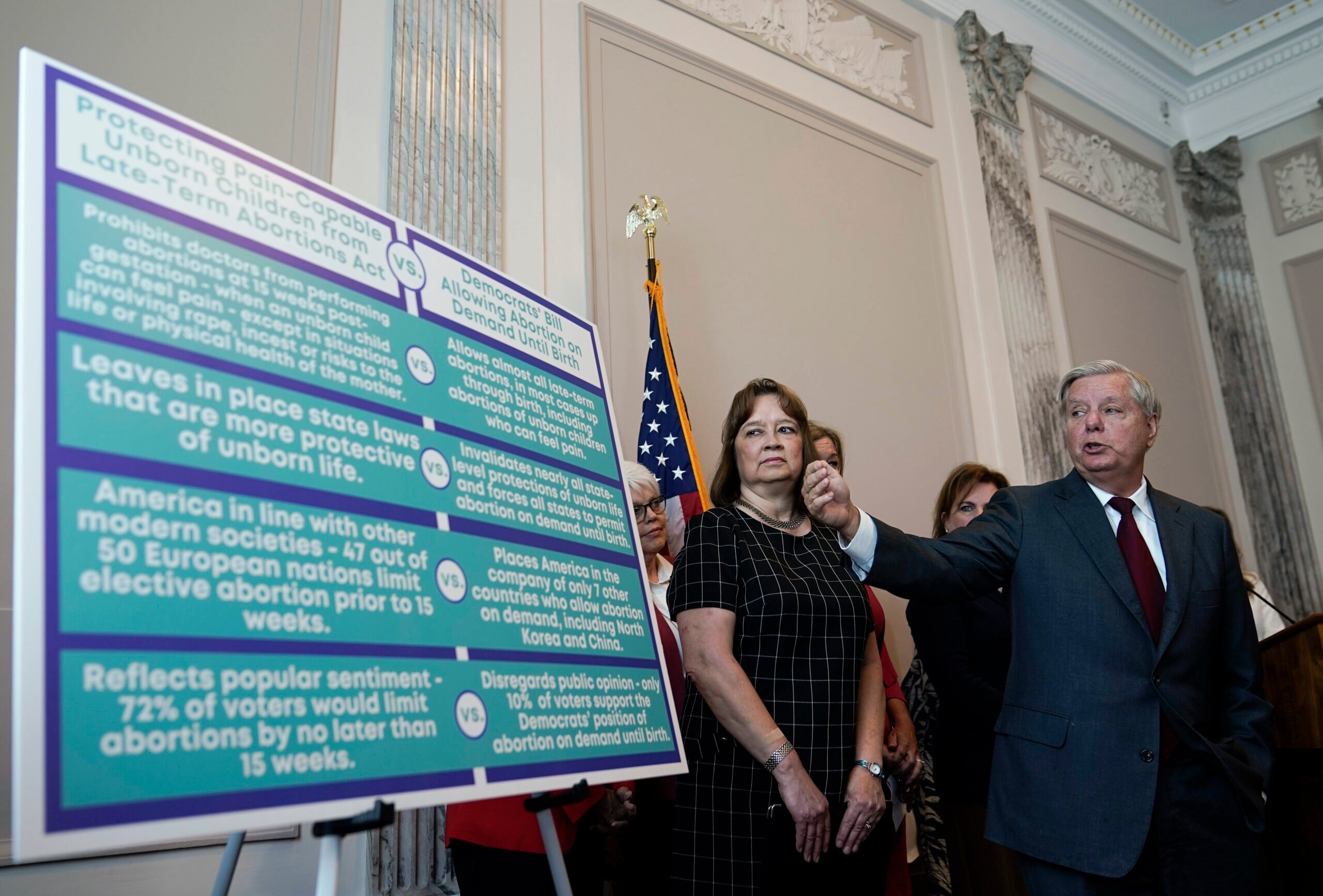 In September, Archbishop William E. Lori of Baltimore, chairman of the U.S. Conference of Catholic Bishops’ Committee on Pro-Life Activities, expressed support for a national 15-week abortion ban proposed by Sen. Lindsey Graham of South Carolina and Rep. Chris Smith of New Jersey, calling the overture “a place to begin uniting Americans regardless of their views on abortion.”

California Bishops have also spoken out against an effort to protect abortion access in their state, though Cardinal Robert McElroy, bishop of San Diego, told Religion News Service in August he expects it to pass, because, “in the particular, secularized environment of California, it’s very difficult.”

Abortion-rights advocates argue the bishops’ efforts may backfire, as they did in August when Kansans voted on an amendment to the state constitution that would pave the way for a potential abortion ban. Voters resoundingly rejected the proposal despite millions spent by Catholic dioceses and other Catholic organizations. 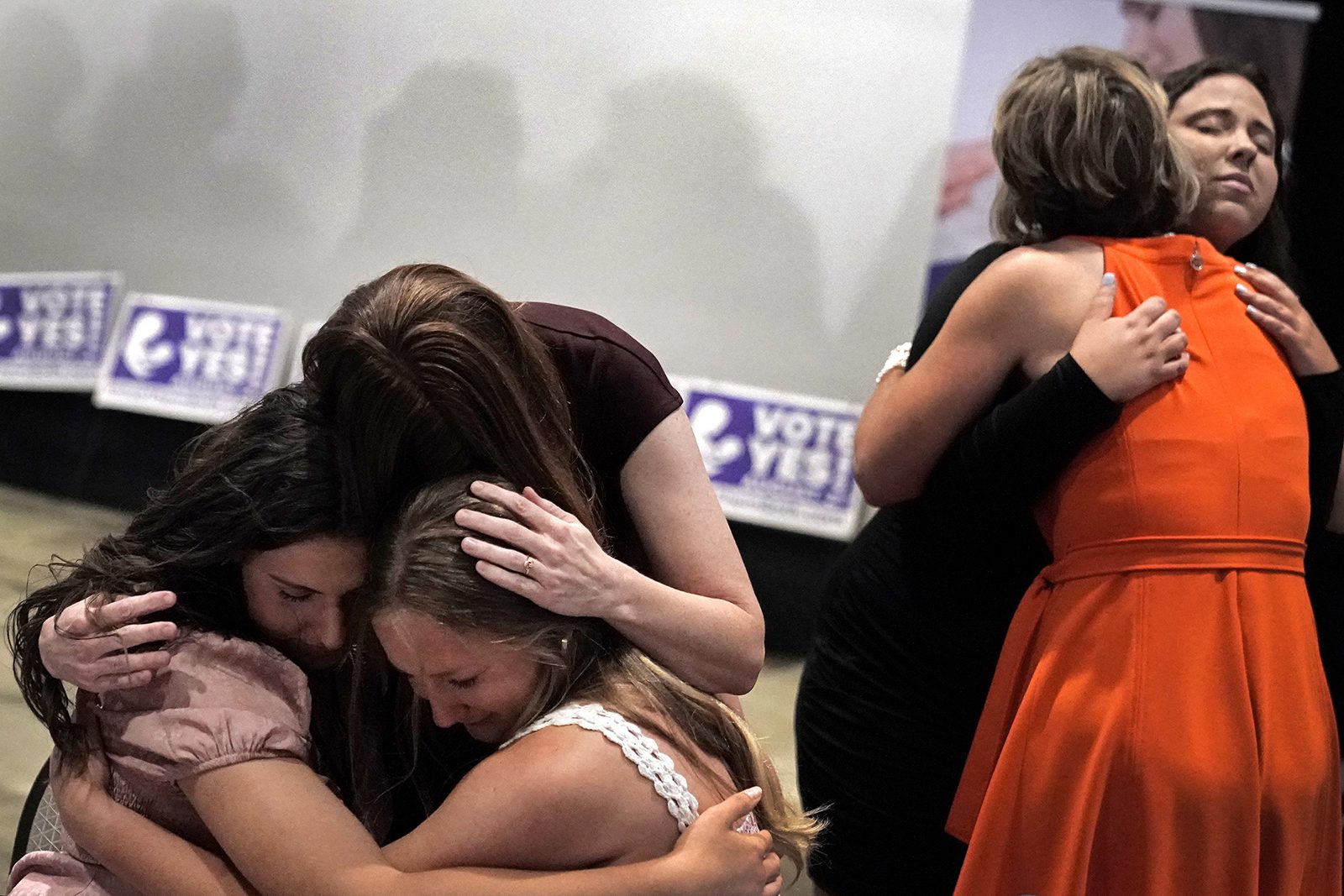 Bishops may be facing a similar uphill battle in Michigan: In September, an Epic-MRA poll found that a majority of Catholics in the state (57%) support Proposition 3.

Ralph Reed was unmoved by the projections about state referendums. “The reality is abortion has never really worked as an issue for conservatives in an initiative and referendum environment,” he said. “There’s a reason why the restrictions that we’ve passed on abortion, almost without exception, have occurred legislatively. It’s been done by the action of state legislatures.”

Reed added that in California, referendums designed to protect abortion rights would do little to increase turnout in the heavily Democratic state, part of a broader trend election watchers have noted in other Democratic-leaning bastions. “It’s not going to work to tell young female voters in California that their right to an abortion might be taken away. It’s just simply not true,” he said. “California is going to have the most liberal abortion law in America.”

But activists on all sides of the issue are leaving little to chance, doing their best to encourage voters to make the issue paramount.

“Abortion is directly on the ballot in California, Michigan, Vermont, Kentucky, and Montana,” read a recent tweet from Catholics for Choice. Referring to the election as “Roevember,” the tweet goes on to encourage supporters to “get out and vote,” declaring, “Your rights depend on it!” 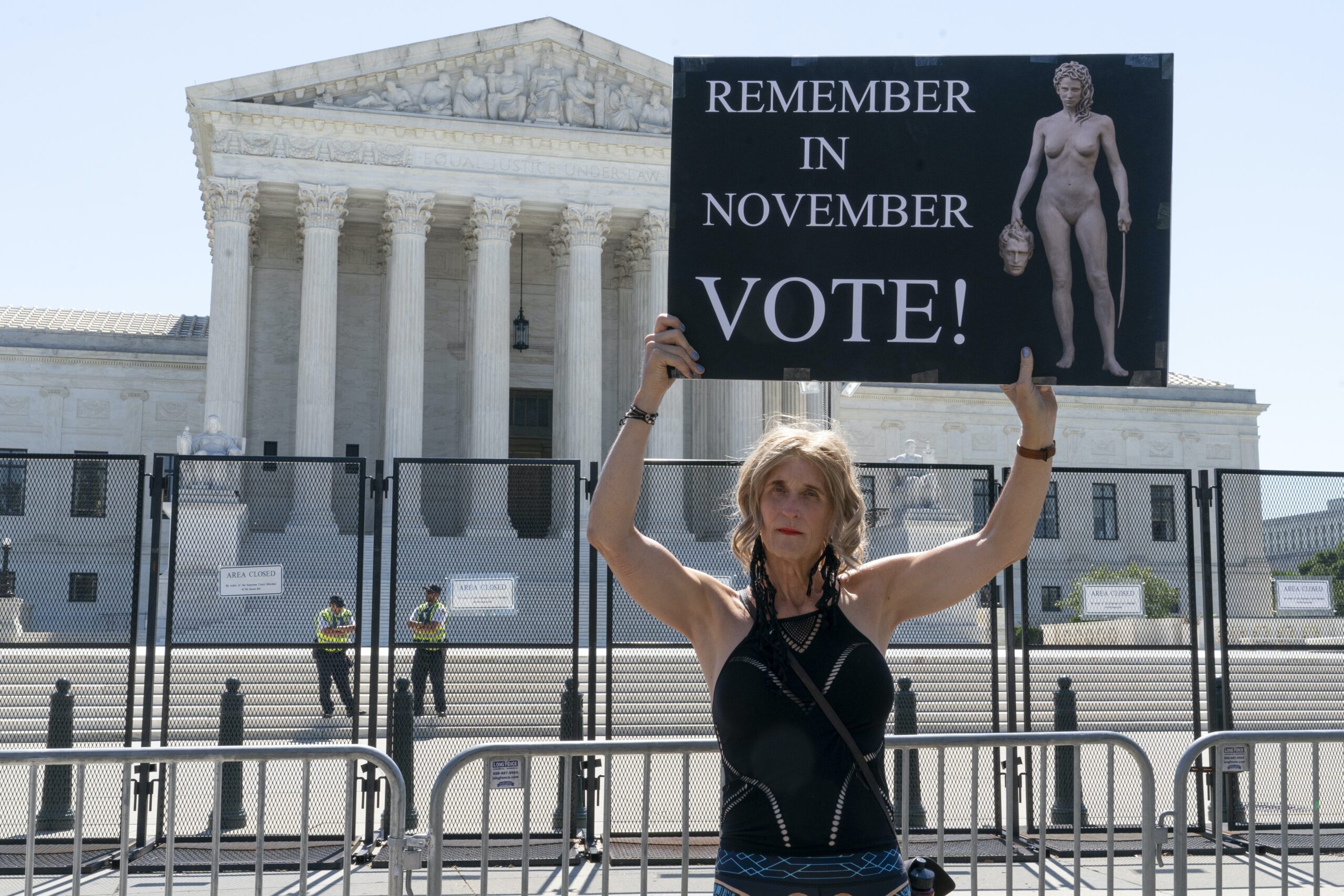 The right to abortion is among the top issues on the ballot in several states. (AP Photo/Jacquelyn Martin, File)

Opinion
The Respect for Marriage Act protects my family — and my faith
Follow us on Facebook!
Submit your photos to RNS