VATICAN CITY (RNS) — Launching the next phase of the Synod on Synodality, a global consultation with Catholics on the future of the church, Vatican prelates on Thursday (Oct. 27) acknowledged the clear call in the first round of reports from the faithful for inclusion of women, LGBTQ individuals and the poor.

“Let us just look to each person as a person loved by God and called into being by God,” said Cardinal Jean-Claude Hollerich, relator generator of the General Assembly of the Synod of Bishops, on Thursday. “Christ died for this person on the cross. If I am not able to give the space to the table to this person than I am against Christ.”

The cardinal’s remarks were made remotely at a news conference presenting the “Document for the Continental Phase,” which contains summaries of the discussions from dioceses and parishes all over the world that made up the synod’s first phase, which began in 2018.

The “synthesis of syntheses” presented at the event has the Bible-inspired title “Grow your tent.” 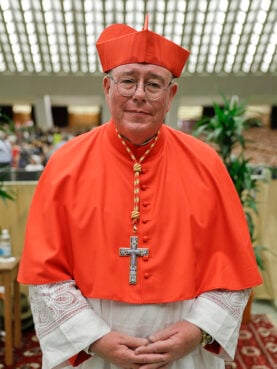 “Who is invited to the tent? All the people, created and loved by God,” Hollerich said. “Our behavior is sometimes a bit more fragmented, and our love is not as big as the love of God,” he continued, before adding that the church must “establish new balances, otherwise the tent will collapse.”

The talk of inclusion echoes a remark Hollerich made in a recent interview with Vatican media outlets in which he said blessings of same-sex couples by priests are still under study. In March 2021, the Vatican’s doctrinal office shut down proposals for the blessing of same-sex couples, stating that the church “cannot bless sin”, but the cardinal questioned in the interview whether “God could ever curse two people who love each other.”

In a statement, the Catholic LGBTQ advocacy network New Ways Ministry praised the openness of the “Document for the Continental Phase,” lauding it as “evidence that we are in a new moment of conversation about LGBTQ issues in the Catholic Church.”

Conservative factions in the church, however, fear that the document may be stretching the Catholic tent too far. In early October, Cardinal Gerhard Müller, a czar of Catholic doctrine at the Vatican, described the synod in an interview with EWTN as part of a “hostile takeover of the church” more intent on transforming it into a political party than about spreading the gospel.

But Cardinal Mario Grech, general secretary of the Vatican’s Synod office, said the “Document for the Continental Phase” does not represent any decisions made by church leaders, but a channel for the many points of view that emerged at the parish level as they were summarized by national bishops’ conferences. 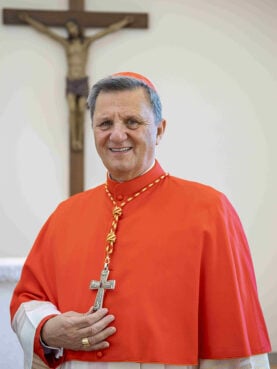 “I hope that this first phase will help everyone in the church, without exclusions, because the Holy Spirit can communicate something to the church through anyone,” said Grech at the news conference, adding: “There are some resistances, but it’s OK. Come forward! Let us walk together.”

More than 40 lay and religious experts gathered in Frascati, southeast of Rome, in September to draft the final document. Participants said they took care to preserve the diversity of opinions and backgrounds in the bishops’ conferences’ summaries. Their document’s first chapter offers an overview of the main findings, the second provides a spiritual background, the third focuses on the principal themes that emerged, and the fourth and final chapter addressed the next steps in the synodal journey.

The experts who appeared at the news conference said they were struck by recurring themes of welcoming and inclusion, ecumenism and interreligious dialogue. Participants in the local discussions see a need to reform church structures in a “synodal spirit,” they said, and focus on priest formation and liturgy.

“The question of the diaconate for women came up repeatedly in many summaries,” said Anna Rowlands, associate professor of Catholic social thought and practice at the University of Durham who participated in drafting the document in Frascati.

Calls for female inclusion in the church have grown stronger in recent years, especially appealing for women to become deacons, who can preach and minister but cannot celebrate Mass. While Francis has created two commissions to discuss the female deaconate, it remains a controversial topic, with critics fearing it will open the door to women becoming priests.

“We are not pushing for any agenda,” said the Rev. Giacomo Costa, a consultant on the synod, at the news conference, adding that the question of female leadership and involvement in the church “could alone have constituted a theme for a synodal assembly.”

Synod organizers admitted that the poor, including migrants and refugees, were less represented in the summaries, noting the challenges they faced in taking part in the synodal discussions. “A process of reaching out is absolutely what we need to happen in the next phase,” Rowlands said.

The document will be sent to seven continental assemblies where bishops, priests, deacons, religious and lay people will discuss it and present a final document to the Vatican by March 31. The Vatican’s synod office will then put together a new summary that will become the working document for two summits of bishops at the Vatican, in October 2023 and the following year.

The synod will be a key to the Catholic Church’s ability to engage and evangelize in the modern world, synod organizers said. “For me, synodality and mission are the two faces of the same medal,” Grech said. “Unless we become a synodal church we will fail to proclaim the joy of the gospel to humanity today.”