VATICAN CITY (RNS) — Former Vatican financial auditor Libero Milone filed suit on Friday (Nov. 4) against the Vatican Secretariat of State, demanding the Catholic Church pay for damages to his reputation that he alleges followed his unceremonious firing in 2017.

At a meeting on Tuesday (Nov. 8) arranged by his lawyer, Milone told reporters that Cardinal Angelo Becciu, once the third-highest-ranking official at the Vatican, was “the mastermind of the so-called operation eject-Milone.”

Milone was hired in 2015 by Pope Francis to look into the notoriously convoluted and troubled finances of Vatican departments as part of continuing financial reforms begun by Pope Benedict XVI. Only two years later, the Vatican announced that Milone had resigned in the face of accusations of embezzlement and of spying.

As Milone was ushered out, Becciu told reporters that the auditor “went against all rules and was spying on the private lives of his superiors and staff, myself included.” Milone shot back, calling the cardinal “a liar.”

According to Milone, prosecutors have now relaunched an investigation into his tenure at the Vatican, as well as his deputy’s. Milone has been called for questioning at the Vatican on Monday.

The Vatican did not respond to repeated requests for comment.

On Tuesday, the former auditor framed his firing as a battle between “the Middle Ages and modernity” and called out “the small mafia at the Vatican” that was offended by his findings of lapses in the Catholic institution’s finances, including “many cases of rule violations, improper predisposition of accounting records, incorrect registrations.”

Milone said he is ready to share proof of the financial mismanagement he said he witnessed at Vatican-owned hospitals and in the church bureaucracy. He and his deputy, Ferruccio Panicco, are asking the Secretariat to pay nearly 10 million euros for reputational and mental damages.

Panicco, who was fired at the same time as Milone, claims the Vatican withheld his personal data after his firing as it investigated him, causing him to lose precious time in his fight against prostate cancer. “I think they are guilty of sentencing me to death for no reason, after slow and significant suffering,” he told reporters Tuesday, reading from a written statement.

Vatican documents viewed by Religion News Service show that Vatican police claimed to have investigated the auditor and his deputy for seven months and found evidence of “illicit conduct,” which led to a judicial proceeding against them for espionage and embezzlement. But in a letter dated May 19, 2018, the Vatican’s top prosecutor wrote that there were no criminal charges against Milone.

Milone said he has sent seven letters to the pope and has received no reply. The former auditor said he has maintained a dialogue with Secretary of State Pietro Parolin, but church officials have refused to settle his case. 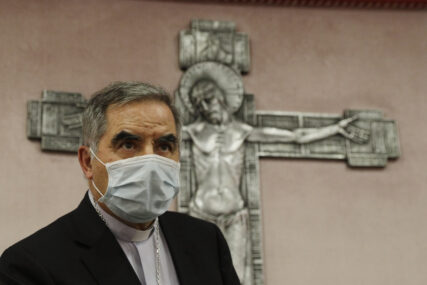 FILE – In this Sept. 25, 2020, file photo, Cardinal Angelo Becciu talks to journalists during a news conference in Rome. Defense lawyers are questioning the very legitimacy of the Vatican tribunal where 10 people are on trial, including Becciu, on finance-related charges, arguing their clients can’t get a fair trial in an absolute monarchy where the pope has already intervened in the case and where prosecutors have failed to turn over key pieces of evidence. (AP Photo/Gregorio Borgia, File)

Prosecutors at the Vatican are currently grappling with a massive financial trial of 10 Vatican employees and curial members, including Becciu, who are charged with, among other things, abuse of power, embezzlement and witness tampering in connection with the controversial 2014 purchase of London real estate made using a papal fund earmarked for charity.

In 2018, Francis removed Becciu from his role as “substitute,” the Vatican equivalent of papal chief of staff, to head the Vatican agency that oversees the process of making saints. In September 2020, Francis stripped Becciu of his Vatican positions and cardinal rights, except for his titles, amid media reports that Becciu had funneled funds belonging to the Holy See to relatives and friends.

In a statement on Thursday, Becciu’s legal representatives said they intend to answer what they called Milone’s “completely unfounded reconstructions” with legal action of their own.

“The cardinal clarified that he only carried out an order by the Holy Father, who informed him that Dr. Milone no longer enjoyed his trust, and therefore invited him to hand in his resignation,” the statement read.

Becciu’s lawyers cited statements by the Vatican declaring that Milone was suspected of “illegal surveillance” into the private lives of Vatican officials and denied that the cardinal interfered with external audits into the Vatican’s Secretariat of State.

At his meeting with journalists, Milone said the Secretariat of State resisted his efforts to audit the department’s financial situation. “Despite our urgent requests to the Secretariat of State to provide more information regarding these investments, including the London purchase, no data has ever been transmitted to us and, after three years, the Sloane Avenue scandal exploded!” he said, referring to the London property by its address.

In addition, Milone said he has proof that several other Vatican offices concealed transactions or obstructed auditors’ attempts to see real estate and investment portfolios. Milone also pointed to significant anomalies in the management of funds at the troubled Catholic pediatric hospital Bambino Gesù.