(RNS) — About 21 million adults in the U.S. have had at least one major depressive episode, the National Institute of Mental Health reports.

A new study now finds that those who have gone to a priest or pastor for advice will most likely have been encouraged to seek out mental health professionals and take medicine to treat it.

That’s the conclusion of a nationally representative survey of clergy serving U.S. congregations from across the religious spectrum. The National Survey of Religious Leaders asked 890 people whose primary job is as a clergy leader about causes of depression and appropriate treatments for it.

Published this week in JAMA Psychiatry, the study reports that 90% of clergy respondents said they would encourage someone with depressive symptoms to see a mental health professional and 87% would encourage people to take prescribed medications for it. “There are some clergy out there that discourage medical care,” said Duke University sociologist Mark Chaves, who co-authored with the study with Duke sociologist Anna Holleman. “But it turns out, it’s a small minority, even among conservative religious groups.”

The study, funded by the Templeton Foundation and fielded from February 2019 to June 2020, is thought to be the first nationally representative survey of clergy beliefs on depression, Chaves said. The larger study included 1,600 congregational leaders from which 890 primary clergy were polled for the depression study.

While many clergy also encouraged religious treatment for depression, such as prayer or Scripture study, those religious remedies were supplementary. They did not replace medical treatment.

The study also asked clergy what they thought were the reasons people experienced depression. The vast majority attributed it to “stressful circumstances,” “traumatic experiences,” “chemical imbalance,” “lack of social support” or a “genetic problem.”

Only 29% of clergy said depression was caused by “lack of faith,” and 16% said “demon possession.”

Black Protestants and white evangelical Protestants were more likely than Catholic priests or white mainline Protestant ministers to encourage religious treatment of depression, without a medical component. Even among those groups, though, only a small minority — about 15% — endorsed substituting religious for medical responses.

Most clergy endorsed mixing both medical and religious approaches to depression.

“These results suggest that medical professionals should view the vast majority of religious leaders as allies in identifying and properly treating depression,” the study concludes. 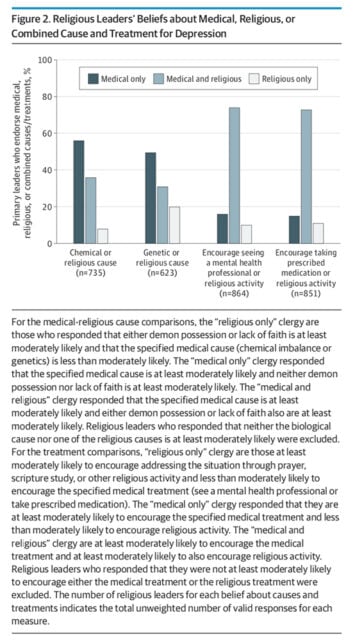 “Religious Leaders’ Beliefs about Medical, Religious, or Combined Cause and Treatment for Depression” Graphic courtesy of JAMA Psychiatry

Major depression is the most common mental disorder in the U.S. and is the strongest risk factor for suicide. Studies have shown an increase in depression in the U.S. population from 6.6% in 2005 to as high as 9% in 2020, according to a study published last year by Columbia University Mailman School of Public Health and City University of New York.

The National Survey of Religious Leaders was conducted online, on paper and by phone just as the coronavirus pandemic began. But Chaves said he didn’t think the results would change dramatically if the study were fielded today.

“I don’t see why the pandemic might change people’s views of the underlying causes of depression and how to treat it,” he said. Still, he said, the study provided a baseline that should be repeated to assess changes over time.

Harold G. Koenig, a Duke professor of psychiatry and behavioral sciences who was not connected to the study, said its results were heartening.

“The majority of mental health professionals are not religious, and that’s a problem because the majority of their patients are,” Koenig said. “So it’s encouraging to see the vast majority of clergy see depression as something that is more likely to have biological or situational rather than religious causes.” 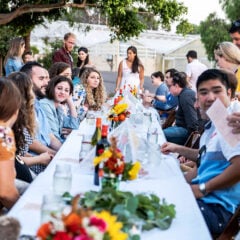 Opinion
As a country we’re in need of healing. Here’s how Shabbat can help.
Follow us on Facebook!
Submit your photos to RNS