VATICAN CITY _ Pope John Paul II, decrying the decline in Sunday worship attendance, Tuesday (July 7) told the world’s 1 billion Roman Catholics not to let Sunday become”merely part of a `weekend.'” Instead, he urged them in a 100-page apostolic letter to”rediscover Sunday”as a day of prayer, contemplation and charity as well as rest and to find forms of entertainment that offer”spiritual enrichment.” And, noting the”strikingly low”percentage of Catholics who attend Sunday Mass in some parts of the world, he reminded the faithful that church law made such attendance a”grave obligation”and skipping it amounted to a”grave sin.””Christians today must face the enticements of a culture which has accepted the benefits of rest and free time, but which often uses them frivolously,”John Paul said in the letter, entitled”Dies Domini”(The Day of the Lord).”Certainly, Christians are no different from other people in enjoying the weekly day of rest; but at the same time they are keenly aware of the uniqueness and originality of Sunday, the day on which they are called to celebrate their salvation and the salvation of all humanity,”he said.

Taking part in cultural, political and sports activities on Sunday in themselves can be positive, he said, but not if the religious significance of the”Lord’s Day”gets lost.”Unfortunately, when Sunday loses its fundamental meaning and becomes merely part of a `weekend,’ it can happen that people stay locked within a horizon so limited that they can no longer see the heavens,”he said.

The pope did not address specific current debates, such as whether professional soccer matches should be held on Sunday _ as they are now in Italy _ or related issues such as new changes in legal opening times for shops that allow Sunday shopping.

Similar issues have arisen within the Catholic and other religious communities in the United States. Most recently, New York Cardinal John O’Connor was sharply critical of the scheduling of both soccer and Little League Baseball games on Sunday. And there has been debate among the largest schools in the NCAA as to whether championship games should be scheduled on Sundays.

John Paul did, however, stress that Christians should”naturally strive to ensure that civil legislation respects their duty to keep Sunday holy.” The pope addressed a world community of Catholics in which Sunday religious observance, especially in developed countries, has slipped sharply as a focus of faith.

In Rome itself, Vatican figures show that little more than one in four people goes to Sunday Mass on a regular basis. In Austria, only about 17 percent of Catholics attend Sunday Mass while in some other countries the figure is as low as 10 percent or less.

Estimates of Mass attendance in the United States vary widely, from a low of 28 percent to a high of about 50 percent.

In his letter, the pope used a tone and an approach that sought to infuse his own enthusiasm for Sunday worship into the minds of the faithful. He reviewed the history of Sunday and its significance for Catholicism, calling it a weekly celebration of Easter.

The pope previewed the letter on Sunday (July 5) in his Angelus message before a crowd of several thousand pilgrims gathered in St. Peters Square, noting that people who wanted to remain faithful to Sunday worship”often had to swim against the tide”of mainstream behavior.

In that message, delivered just days before he was set to leave Wednesday (July 8) on his own much needed vacation, John Paul recommended the forthcoming letter on Sunday observance to the faithful as worthy reading matter for their own vacations.”I am ideally offering this new document to you … at the beginning of this season of vacations, of legitimate relaxation, which does not however, mean an `empty’ season,'”he said.”Why not take this little book with you and dedicate a few hours of calm reading to it? It could end up, at least in certain respects, being an interesting discovery for you.” DEA END GRUBER 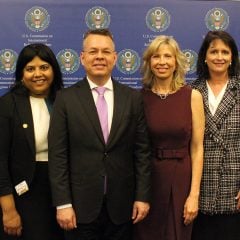