LONDON (RNS) — With the fate of East London’s oldest halal restraint on the line, a desperate call went out on Twitter.

“Not one to do this,” wrote @mehnazmeh, “but my dad owns the oldest Indian restaurant in east London and has been struggling with customers, so please show some love! If you’re in Aldgate, come and have a curry, I’m biased, but it’s the best!”

Mehnaz Mahaboob included parallel images of both her father and grandfather seated in the restaurant over the decades. The tweet went viral, earning more than 40,000 interactions on Twitter, and for a few glorious weeks Halal Restaurant was packed.

“It really worked. There were people waiting outside the door because of the tweet. We had to turn people away for dinner, which is something we never had before,” said Mahaboob Narangoli, Mehnaz’s father and the current owner of Halal Restaurant, which serves a wide variety of South Asian food, with the meat found in its curries and biryanis slaughtered in accordance with Islamic law.

The brief boom brought in enough to keep the business afloat through a second pandemic lockdown in the U.K., when the restaurant had to again close its doors for seven months, according to Narangoli.

Halal Restaurant first opened in 1939 to serve the needs of Muslims in the maritime industry. Over the ensuing decades the restaurant has changed with East London and now relies on the lunchtime crowds of bankers, shipping agents and insurance industry employees who work in the city of London. But the pandemic cut much of that traffic, forcing the restaurant to rely on delivery and takeaway orders as the normally packed streets of London went quiet.

“We have many customers who have been coming here even before my father took over. We just had someone in today who has been eating here since the 1960s,” said Narangoli.

The restaurant was originally part of London’s Hostel for Indian Seamen. In those days, the nearby Saint Katherine’s Docks, named for the church demolished in 1825 that once stood on the site, was a working part of London’s docklands. The area attracted many South Asians who worked as lascars aboard various ships. 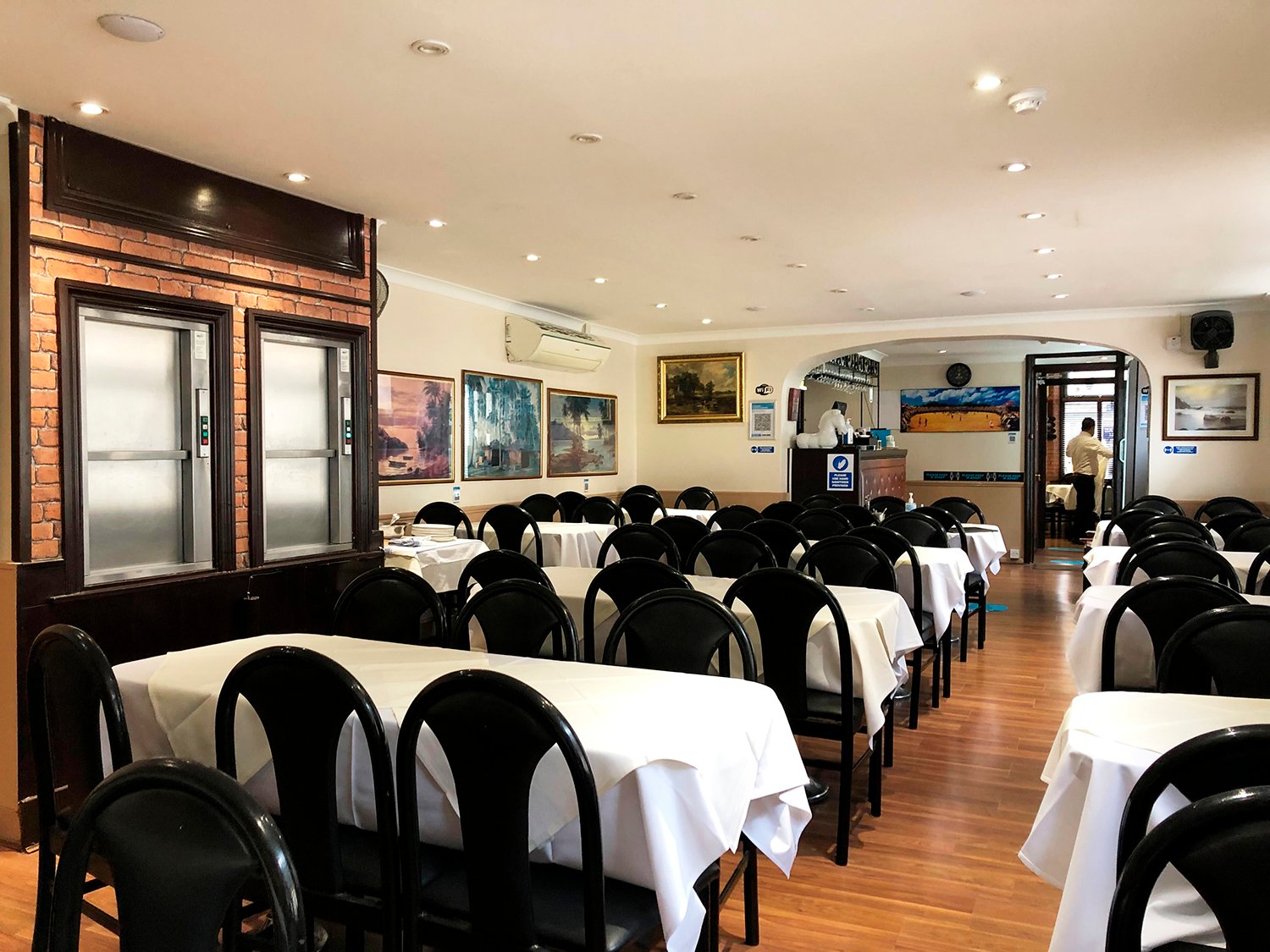 The Halal Restuarant, located in Aldgate, serves a variety of South Asian foods, with their meat slaughtered and prepared in accordance with Islamic law. RNS photo by Joseph Hammond

In 1932, the Indian National Congress had estimated there were just over 7,000 South Asians living in the United Kingdom — many tied to the maritime industry.

The docks and the Tower of London, which is a five-minute walk away, were both heavily damaged during World War II. Even today, Halal Restaurant’s sparse tables seem to recall the establishment’s maritime heritage. A photo of the restaurant’s all-wooden interior in the 1970s could easily be mistaken for a mess hall on a ship.

Narangoli’s father, Usman Abubakar, was no stranger to the sea. Abubakar first came to London as a member of the Merchant Navy. In 1970, he started working as a waiter in The Halal Restaurant. By 1978, Abubakar was the proprietor, after purchasing the restaurant from its second owner.

The 1970s may have been a turbulent time in Britain with labor struggles and the 1976 currency crisis — but it was an important decade for the history of Indian food in the country, and by its end, South Asian cuisine had become a British staple. In 1971, on a stormy night in Glasgow, Scotland, a British Bangladeshi chef named Ali Ahmed Aslam improvised “Chicken tikka masala,” a dish now found on menus around the world, including at Halal Restaurant. Within five years, the United Kingdom boasted more than 2,000 “Indian” restaurants — the majority actually Bangladeshi operated — by some accounts, that number would grow to 3,000 by the decade’s close. The Halal restuarant in London has a variety of daily specials that are marked on a chalkboard in the dining room. Early in the pandemic, Mehnaz Mahaboob tweeted a photo of his family’s Indian restaurant asking people to try out their food. RNS photo by Joseph Hammond

The building that houses Halal Restaurant dates to the 17th century and has witnessed the changing religious demographics of East London. On nearby Brick Lane, those changes are perhaps best expressed in the fate of a single building. A church opened by French Huguenots in the 18th century became a synagogue in the late 19th century and, in 1978, a mosque. The Brick Lane mosque took over the space to serve the growing Bangladeshi community as many Jewish families headed to the suburbs.

These cultural influences are apparent on Brick Lane where a person can find everything from kosher bagel sandwiches to halal tomahawk steaks. And it is not uncommon to find Muslim worshippers during Ramadan lined up for “salt beef beigels” in front of the area’s 24-hour Jewish bakeries.

Tower Hamlets, the area of East London where Halal Restaurant now sits, is home to more than 40 Islamic institutions and dozens of halal restaurants. Nearby is the East London Mosque, founded in 1985 and now one of Europe’s largest, able to accommodate 7,000 worshippers.

While estimates vary, today there are between 8,000 and 12,000 Indian restaurants in the United Kingdom, the majority of them halal. London itself is home to a diverse range of halal South Asian eateries. Dishoom, a small chain of restaurants that opened in 2010, pays homage to Parsi or (Zoroastrian) cafes, which are now vanishing across India. Meanwhile, Brigadiers, which opened in 2018, is inspired by Indian military mess halls.

A number of new tourism-focused hotels have sprouted up near Halal Restaurant due to its proximity to the Tower of London. This has added a few extra evening diners, said Narangoli. East London’s seedy history has even become an unlikely tourist attraction.

Tours offer visits to sites associated with the Kray Brothers, twin brothers and East London gangsters, both portrayed by Tom Hardy in the 2015 film “Legend.” Another tour focuses on a different famous criminal: Jack the Ripper. That case was investigated in part by officers from the Leman Street Police Station, which opened in 1830. During its 20th-century heyday, many “bobbies” from the Leman Street Station packed Halal Restaurant until the station was shuttered in 1995.

The area’s edgy history and comparatively low rents have attracted a growing hipster scene. A coffee shop near the restaurant does a brisk trade and offers coffee laced with CBD. While hipster culture in the area is a relatively recent phenomenon, the its demographics may be changing again. Narangoli said the number of customers from East Asian countries is slowly increasing.

Social media campaign or not, the pandemic has made a dent in business, and there are nearby shops that have yet to re-open. Next door, a barbershop named Ahmed Scissorhands, a reference to the 1990 film “Edward Scissorhands,” remains shuttered. For a restaurant that survived the Blitz and the labor tumult of the 1970s, Narangoli is only cautiously optimistic about the long-term viability of the restaurant.

“Let’s see if things start to get better soon. We really hope the workers start coming to work again in the city (of London); that is when things can really turn around,” said Narangoli.