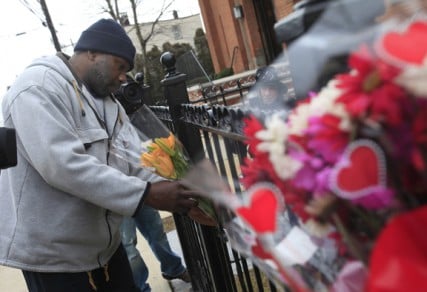 Michael Nash of Newark, N.J., leaves flowers at a make-shift memorial outside the New Hope Baptist Church, where singer Whitney Houston honed her talents in the choir.

Houston’s family rejected a public final farewell to the pop icon, choosing instead to hold a private, invitation-only funeral at New Hope, the singer’s childhood church, which seats about 1,500. The Rev. Joe A. Carter, pastor at New Hope Baptist Church, said he will officiate the service, scheduled to begin at noon. Houston was born in Newark and raised in nearby East Orange.

Winans, who also serves as the lead pastor at Detroit’s Perfecting Church, told the Detroit Free Press that he felt like he had lost a sibling when he learned the 48-year-old singer had died Saturday in Beverly Hills, Calif.

Although a local community leader with ties to the family told The Star-Ledger on Monday that there would be a public wake and funeral at the Prudential Center on Thursday and Friday, the Houston family never confirmed it, Carter said.

“We view it as nothing more than a rumor,” he said.

The family has been split over where to bury Houston, with Cissy Houston and Warwick lobbying for Atlanta, where they believe Houston was happiest, the website TMZ reported.

However, two people familiar with the family’s plans told The Star-Ledger last night the family is considering burying her in a Westfield cemetery at least one day after the funeral. The people asked not to be named because they are not authorized to speak publicly for the family.

Meanwhile, Newark police have begun making plans for Saturday’s service, which is expected to draw thousands of fans and a crush of media.

“Obviously Whitney Houston was one of the greatest performers of our time, and certainly we expect a huge presence of other performers, actors, and we’re preparing for all that,” Police Director Samuel DeMaio said Tuesday.

DeMaio said police have begun closing streets near the church and that officials are working on a security plan for the funeral, expected to draw some of the biggest names in the music industry. He also raised the possibility of erecting a video monitor outside the church to accommodate fans and residents.

Outside the funeral home on Martin Luther King Jr. Boulevard yesterday, Whigham, who has known the family for decades, urged the dozens of reporters — some from as far away as Brazil and Russia — to let the family mourn in private. “A mother has lost her child,” Whigham said. “It’s not planned that way.”

But fans, who waited outside the funeral home late Monday night to watch a gold hearse return New Jersey’s pop princess to her hometown and who continued to pay their respects at a makeshift memorial outside the church yesterday, mourned their missed chance to say farewell.

“The public should have an opportunity to give a last goodbye to one of the city’s most beloved daughters,” said Calvin Taylor of Newark, who skipped work Tuesday to spend time outside the funeral home. “She touched so many people, I think it’s terrible. She’s got a lot of love here.”

Jethro Townes, a Newark native whose son Hassim Drinkard is a distant cousin of Warwick’s, drove to Newark from Harrisburg, Pa., with his wife to visit a memorial outside the church. Fans have left stuffed animals and signed their names to large goodbye posters hung on the church’s balloon-festooned fence.

Townes said he hadn’t seen Houston in years, but said the family wasn’t worried she had relapsed into drug use in recent months, despite reports painkillers were found in the hotel room where she died: “I think she had overcome her obstacles in life.

“God allows a time for people to leave his Earth,” Townes said, recalling the recent death of Etta James and the loss of Michael Jackson in 2009. “But if you look at what has happened over the past few years, God has a great choir now.”

Houston was found submerged in the bathtub of her Beverly Hills Hilton hotel room Saturday afternoon, hours before she was to perform at mentor Clive Davis’ annual pre-Grammy Awards party. Though a cause of death has not been released, law enforcement sources have told various media outlets Houston, who struggled with drug addiction in the past, died from mixing alcohol with prescription drugs.

Calling Houston’s accomplishments “a great source of pride for the people of the state,” Gov. Chris Christie will order all state buildings to fly flags at half-staff on Saturday. Christie routinely orders flags lowered to honor fallen New Jersey soldiers, but he also asked that flags be lowered when E Street Band saxophonist Clarence Clemons died from a stroke last year.