But for Bart Centre, Camping's mea culpa could have real impact on his bottom line.

The co-owner of a business that promises to care for the pets of Christians who are swept up in the Rapture saw a jump in business last year ahead of Camping's prediction. 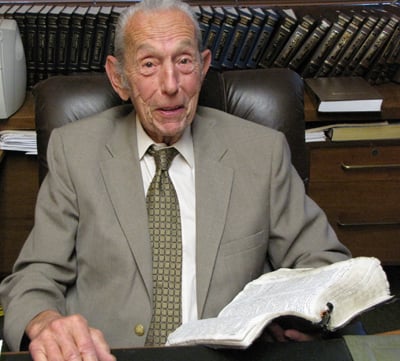 (RNS) California radio evangelist Harold Camping said the world will end on May 21, 2011 — a figure he based, in part, on when he believes Noah entered the ark. RNS file photo by Kimberly Winston.

Now he's sorry to see Camping get out of the predictions business.

“It was obviously a mistake,” said Centre, who runs Eternal Earth-Bound Pets from New Hampshire. “I'm just sorry that he's not going to be doing any more predictions because it's good for business.”

Camping's original pronouncement made some Rapture-ready Christians decide it was time to make arrangements for Fido and Fluffy when their owners were swept up into glory.

Standing at the ready was Centre, a retired retail executive who started his business in 2009, unaware of Camping's existence. He has booked atheist “rescuers” across the country to recover feathered and four-legged friends who got left behind.

By the end of 2010, he had 170 clients. But once people started talking about Camping's prophecy, “then we started to see an uptick in business,” he said.

With demand on the rise, Centre did what any smart businessman would do — he raised his rates, to $135 per pet for a 10-year coverage plan. If someone had a second pet, the additional fee rose to $20.

Total clientele rose to 245 by May 21. With the world still spinning after Camping's original prophecy failed to materialize, Centre's business only inched up to 267.

“It really died off really quickly after May,” Centre said.

He's also had to handle buyer's remorse. Six customers who signed up just weeks before Camping's failed doomsday asked for their money back. Centre declined, pointing to the contract.

Centre and his co-owner, a Minnesota police officer, share the income from their fees with the 48 other people they've deemed to be suitable “rescuers.” Most, he said, are “atheists who are happy to give people peace of mind.”

With Camping saying he's done with making predictions, the co-owners of Eternal Earth-Bound Pets are banking on other prognosticators.

“Now the next thing we're gearing up for is this Mayan calendar end times, which we still believe is going to bring us some substantial business,” Centre said, referring to some interpretations of an ancient Mayan calendar that the world will end in late 2012.

“After the Mayan calendar doesn't happen there will be somebody else who comes up with a prediction.”

Opinion
‘No man is an island,’ wrote John Donne on a grim Christmas amid a pandemic
Follow us on Facebook!
Submit your photos to RNS