(RNS) Even before Mitt Romney swept the first three primaries in April, effectively ending Rick Santorum’s presidential bid in the eyes of the pundits if not Santorum himself, Mark DeMoss was fielding calls from religious conservatives who sensed the end was nigh and were eager to set up meetings with Romney. 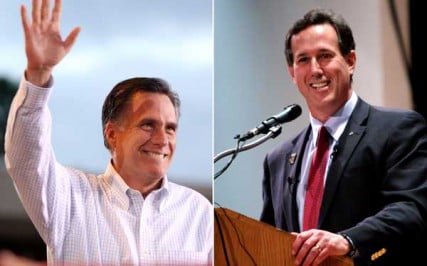 DeMoss, an evangelical public relations executive and a senior adviser to the Romney campaign, also said that immediately after Romney's latest victories he got a call from a prominent evangelical who wanted to organize a summit with other Christian conservatives to start rallying support for Romney for the fall campaign.

If the meeting comes off, it would represent a marked counterpoint to conservative conclaves earlier this year that strongly backed Santorum.

Also that week, on April 1, Richard Land, the top public policy official for the Southern Baptist Convention and no fan of Romney, penned an Op-Ed in USA Today saying Romney’s nomination was inevitable and explaining why evangelicals would rally behind him.

It was exactly the kind of movement DeMoss has been working toward, and it could be key to deciding Romney's political fortunes, and those of the Republican Party, heading into November's face off with President Obama and the Democrats.

“I’m optimistic that things are coming together nicely behind Mitt Romney and could do so fairly quickly,” said DeMoss, who championed Romney even as other evangelical leaders and voters expressed serious reservations about Romney’s conservative credentials or Mormon faith.

Certainly nothing could be more effective for Romney in closing out a long and bitter primary season than marshaling support from the evangelicals who have formed the core of the opposition to him all year, whether they were backing Santorum or one of the other “not Romneys” who variously filled that role.

Moreover, as Romney pivots to a general election campaign against Obama, nothing will be more critical than winning the hearts and minds of social conservatives who would likely prove the difference in what is expected to be a close election determined by the turnout of each camp’s core constituency.

But the process of winning over evangelicals won’t be easy.

Romney has kept key social conservative leaders at arm’s length, and evangelicals have shown him little love in return. That breach will take time and effort to overcome.

“Right now, Romney is lacking a compelling narrative to close the deal,” said Ken Blackwell of the Family Research Council, whose leadership has often cast a wary eye at Romney. “He’s going to have a base intensity problem unless he can unify the conservative base.”

“There is a significant challenge” for Romney to convince social and Christian conservatives that they can't “just to sit back and disengage,” agreed Deal Hudson, a former Republican adviser for outreach to Catholics who now heads Catholic Advocate, a group aimed at mobilizing Catholic voters.

Yet Romney has no choice, because in many respects religious conservatives are the quintessential voters of the 2012 cycle for Republicans.

Evangelicals in particular are not only turning out in record numbers – they represent upwards of half of all ballots cast in the GOP primaries – but they bring a religious intensity and commitment to their agenda that channels the Tea Party passion that has mobilized the populist base and rocked the political elites. Moreover, these faith-based voters want a candidate who reflects their own consistency and single-mindedness – not a calculating wonk who will run an “Etch-a-Sketch” campaign in the general election, to invoke the unfortunate analogy uttered by a Romney adviser.

“To have a candidate who tacks one way depending on where the wind is blowing feeds into that cynicism and really makes it difficult to get out the vote for them,” said Marjorie Dannenfelser, head of the anti-abortion Susan B. Anthony List, which has pumped money and resources into supporting Santorum.

A post-primary move to the center to battle Obama would be Romney’s “biggest mistake,” Hudson said. “That would just kill him.”

There are, however, several factors working in Romney’s favor, according to his allies and some of his faith-based “frenemies” – the religious conservatives who increasingly, if grudgingly, acknowledge they may have to settle for Romney as the GOP nominee:

— Running mate: “He must pick a well-known social conservative” as a running mate, Land wrote. Romney has a range of good options, any of which is sure to please the Christian right. Ohio Sen. Rob Portman and Wisconsin Rep. Paul Ryan are among those frequently mentioned, with South Carolina Sen. Jim DeMint, a Tea Party leader, also generating some buzz; DeMint would also bring energy and flair to the race, not to mention Southern voters who have not warmed to Romney.

— Harnessing enthusiasm: While the primaries have been a slog, they have also galvanized social conservatives. If Romney can harness their enthusiasm, he will have a significant advantage in November. “The idea that they (social conservatives) would falter now would be a shocker to me, given what we’ve seen on the ground,” said Dannenfelser, who reiterated that she and her organization will stick with Santorum as long as he stays in the race.

— Highlighting the differences: When the primaries end, Republicans will be able to focus on criticizing Obama rather than competing to see who among the GOP candidates is most “severely conservative,” in Romney’s self-description. That in turn will show voters that “the 2012 race really represents the triumph of the conservative movement,” said David French, an evangelical and a Romney ally who co-wrote a new book, “Why Evangelicals Should Support Mitt Romney (and Feel Good About It!).” “The daylight between the candidates on the social issues is non-existent.”

— Anyone but Obama: Obama is still the opponent, and many evangelicals believe that will be enough to unify social conservatives to back the GOP ticket.

Still, others aren’t so sure. “You can’t beat what Obama brings to the table with a protest vote,” said Hudson. Blackwell agreed, saying Romney must court social conservatives while pointing out his differences with Obama. “It is a combination, not just one or the other,” he said.

For now, the religious conservative most critical to Romney’s prospects in November is a Roman Catholic: Santorum. The timing of Santorum’s departure from the race, the tenor of his remarks as he concedes, and, eventually, the energy and sincerity he brings to campaigning for the GOP ticket in the fall will go a long way toward determining whether the religious right gives Romney the support he will need to win.

In other words, even if Santorum is unable to beat Romney in the primaries, he could still determine his fate in November.