WASHINGTON (RNS) Neither Mitt Romney’s trip to Israel Saturday (July 28) nor President Obama’s Middle East policies will have much effect on Jewish voters this fall, according to a new report that says Jewish voting patterns are predictable and unchanging.

The report, “Making Sense of the Jewish Vote,” predicts Jewish Americans will follow historical precedent and largely vote Democrat this fall. Moreover, Jewish voters will have a negligible effect on the presidential election’s outcome, even in swing states, said Jim Gerstein, a pollster with polling firm GBA Strategies who compiled the report. 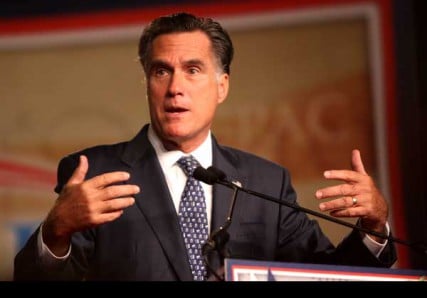 A poll by the Pew Forum on Religion & Public Life found 65 percent of Jews identify as Democrat, a statistic that has held steady for years. Obama received 74 percent of the Jewish vote in 2008, and is currently polling at around 70 percent.

“The only problem that Obama and Democrats have with Jewish voters is that there are not more of them,” Gerstein said.

Still, Pew found that Jewish voters' identification with the GOP has risen from 20 percent in 2008 to 29 percent last year.

It would take even bigger shifts in the Jewish vote to make a difference in swing states, Gerstein said.

As with most Americans, the economy is Jewish voters' greatest concern, not Israel, according to Gerstein, who cited a 2010 poll that found only 7 percent considered Israel a top priority.

Spiritual Politics
Jewish voters edge further away from Trump
News
Stacey Abrams’ passion for voting began with her preacher parents
Faith
Why is it so hard for atheists to get voted in to Congress?
Opinion
Black clergy call for 40 days of prayer, fasting and ‘spiritual warfare’ before election
Martini Judaism
Dear AOC: You blew it
© Copyright 2020, Religion News Service. All rights reserved. Use of and/or registration on any portion of this site constitutes acceptance of our User Agreement and Privacy Policy, Privacy Statement and Cookie Notice. The material on this site may not be reproduced, distributed, transmitted, cached or otherwise used, except with the prior written permission of Religion News Service.