WASHINGTON (RNS) A security guard is recovering after he was shot Wednesday morning (Aug. 15) in the headquarters of the Family Research Council, a conservative Christian lobbying group.

Authorities said the security guard was shot in the arm after confronting an armed man in the building’s lobby. The suspect was detained and taken into FBI custody. The guard was taken to the hospital and is in stable condition. 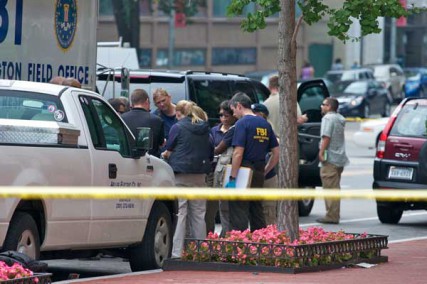 A security guard is recovering after he was shot Wednesday morning (Aug. 15) in the headquarters of the Family Research Council, a conservative Christian lobbying group.

The shooter was still being questioned Wednesday afternoon, said FBI spokeswoman Jacqueline Maguire. No charges have been filed, and investigators had only just begun to search the lobby for evidence.

Authorities have not released the names of the guard or the shooter. The motive for the shooting is still under joint investigation by the FBI and the Metropolitan Police Department.

“Our first concern is with our colleague who was shot today. Our concern is for him and his family,” FRC President Tony Perkins said in a statement.

Likely Republican presidential nominee Mitt Romney issued a statement, saying “there is no place for such violence in our society.” 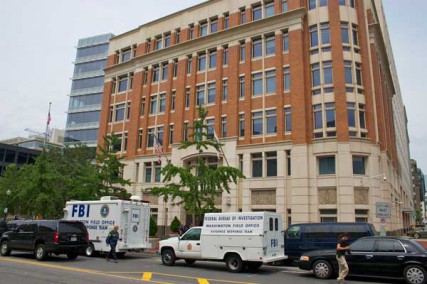 A security guard is recovering after he was shot Wednesday morning (Aug. 15) in the headquarters of the Family Research Council, a conservative Christian lobbying group.

The FRC's strong stance against gay marriage and abortion have led some to question the motive for the crime. The National Organization for Marriage quickly condemned the attack and suggested the shooting may have come in response to characterizations of the FRC as “hateful.”

“Today’s attack is the clearest sign we’ve seen that labeling pro-marriage groups as ‘hateful’ must end,” said NOM president Brian Brown. “The Southern Poverty Law Center has labeled the Family Research Council a ‘hate group’ for its pro-marriage views, and less than a day ago the Human Rights Campaign issued a statement calling FRC a ‘hate group’ – they even specified that FRC hosts events in Washington, DC, where today’s attack took place.”

Catholic League President Bill Donohue also decried the shooting. “Is this what we have come to? Has the environment become so toxic that a faith-based organization becomes a target of an attack simply because it holds traditional values on sexuality, marriage and life? Unfortunately it seems that this may be the case,” he said.

A coalition of 25 gay rights leaders, including HRC president Chad Griffin, issued a statement Monday afternoon condemning the shooting, saying, “The motivation and circumstances behind today’s tragedy are still unknown, but regardless of what emerges as the reason for this shooting, we utterly reject and condemn such violence.”

Equality Matters, which has criticized the FRC for its stance against gays and lesbians, condemned the shooting. “Equality Matters has made it clear that we do not agree with policies supported by the Family Research Council. Despite our differences, we are upset and concerned over reports that they may have been targeted,” it said.

News Analysis
The top three faith moments in the Harris-Pence vice presidential debate
News
Study: Biden still leads among Latino Christian voters, but Trump’s support has grown
Opinion
Calling all women: It’s time to take our stand together against tyranny and injustice
News
Nationalism ‘must not prevail,’ Pope Francis says, addressing the United Nations
Spiritual Politics
With Ginsburg’s seat open, abortion moves to the center of the 2020 election
© Copyright 2020, Religion News Service. All rights reserved. Use of and/or registration on any portion of this site constitutes acceptance of our User Agreement and Privacy Policy, Privacy Statement and Cookie Notice. The material on this site may not be reproduced, distributed, transmitted, cached or otherwise used, except with the prior written permission of Religion News Service.