(RNS) Amid a rash of recent attacks that are being investigated as hate crimes, a coalition of more than 150 organizations is calling on the Senate Judiciary Committee to conduct hearings next month with the aim of revamping hate crime legislation. 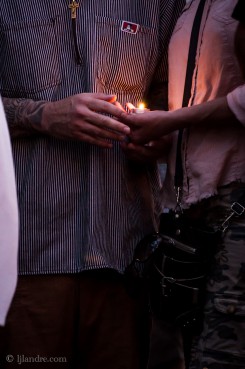 Residents hold candles during a vigil at Cathedral Square Park in Milwaukee on Sunday night Aug. 5 after shooter Wade Michael Page killed 6 people at a local Sikh temple that morning.

The letter noted that the shooter that killed six at a Wisconsin Sikh temple, or gurdwara, in August had ties to hate groups. It also cited 10 Islamic institutions in seven states that have been vandalized, shot at, or burned in the past month.

“We want to do everything in our power to make sure what happened in Oak Creek never happens to anyone again,” said Rajdeep Singh, director of law and policy for the Sikh Coalition.

An aide with the Senate Judiciary Committee said no firm plans have been made to schedule a hearing, but expected several members would be interested in holding one.

An FBI investigation reported 6,628 hate crimes in 2010, the last year for which data is available. Of these, 47 percent were motivated by race, 20 percent by religion, 19 percent by sexual orientation, and 13 percent by ethnicity or national origin.

Hate groups “have beliefs or practices that attack or malign an entire class of people, typically for their immutable characteristics,” the SPLC states on its website. A hate group designation does not imply that a group advocates or engages in violence or criminal activities.

The letter acknowledged the importance of recent legislation like the 2009 Matthew Shepard and James Byrd, Jr. Hate Crimes Prevention Act, which extends hate-crime law to include crimes motivated by a victim’s gender, sexual orientation, gender identity or disability.

However, the letter also criticized the system of voluntary reporting set up under the 1990 Hate Crime Statistics Act. The letter writers said that understates the true number of hate crimes in the U.S.

In a related development, the Sikh Coalition welcomed a Thursday letter from 19 U.S. senators calling on Attorney General Eric Holder to have the Justice Department track hate crimes against Sikhs.

“Until we have a more comprehensive understanding of the number and type of hate crimes committed against Sikhs, our law enforcement agencies will not be able to allocate the appropriate level of personnel and other resources to prevent and respond to these crimes,” the senators wrote Holder.

News
Normally a refuge on campus, college Muslim groups fight students’ isolation in a pandemic
News
In Oregon, churches and anti-fascists unite to provide mutual aid to fire evacuees and others in need
News
Muslim woman sues Los Angeles Police Department for forcibly removing her hijab
News
Activists to hold protest rally after reports of ICE officials forcing Muslim detainees to eat pork
News
600 faith leaders sign letter urging California governor to stop transfer of incarcerated people to ICE
© Copyright 2020, Religion News Service. All rights reserved. Use of and/or registration on any portion of this site constitutes acceptance of our User Agreement and Privacy Policy, Privacy Statement and Cookie Notice. The material on this site may not be reproduced, distributed, transmitted, cached or otherwise used, except with the prior written permission of Religion News Service.