PORTLAND, Ore. (RNS) Future generations could be stripped of mutations like hereditary blindness or maternal diabetes, after a breakthrough study at Oregon Health & Science University.

But the new technique is also one short step from genetic design of future generations, said Marcy Darnovksy of the California-based Center for Genetics and Society. “These powerful new technologies have a whole bunch of wonderful and appropriate uses – and a number of ways they can be misused.” 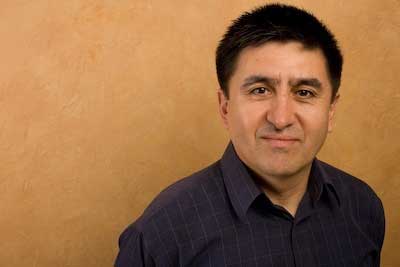 Oregon Health & Science University biologist Shoukhrat Mitalipov modified unfertilized eggs for the first time, a technique that offers great promise as well as ethical pitfalls. **Note: This image is not available for download.

The researchers, led by OHSU biologist Shoukhrat Mitalipov, modified unfertilized eggs for the first time, a technique that offers great promise as well as ethical pitfalls. Such research is banned in many countries.

Three years ago, the Russian-born Mitalipov made headlines with experiments that created monkeys with genetic material from three parents. Now, his team has done it with human cells, setting the stage for possible experiments with humans.

The procedure dealt with what's called mitochondrial DNA, the small part of the cell that turns food into energy. Mitochondrial disorders can lead to neuropathy (a type of dementia) and nervous system disorders such as Leigh disease.

In a study published Wednesday (Oct. 24) in the journal Nature, the OHSU team described successfully transferring DNA from donor cells into other donor cells, fertilizing the eggs to create 13 tiny early embryos of roughly 100 cells each. These pre-embryos, called blastocysts, were converted to embryonic stem cells for future research.

Key to the technique: replacing the defective mitochondrial DNA with healthy genetic material from the egg of a second woman.

Four monkeys produced this way from Mitalipov's 2009 experiment remain healthy, showing the process is “not only effective but also has no side effects,” he said.

Mitalipov stresses that mitochondrial DNA is different from the nucleus DNA that determines physical traits like eye and hair color, or even intelligence and personality. He notes an ethics commission in the United Kingdom has pronounced this kind of research ethical, and the OHSU research was sanctioned by an internal review board.

The research is prohibited in some other countries, but permitted in the U.S, although the government doesn't allow federal funding of it. Mitalipov was not allowed to use his federally funded laboratory in Hillsboro, Ore., instead doing the work in a duplicate lab set up in OHSU's South Waterfront complex in Portland.

Only a few groups pursue this research, including one in New York and another in the United Kingdom, where the country is mulling over legalizing this type of technique.

“I think we are the most advanced. Hopefully this will make us leaders in human embryo and stem cell research in the United States and the world,” Mitalipov said Wednesday.

The Food and Drug Administration seems open to a small clinical trial transplanting modified embryos into women to study their offspring, meaning it could be offered in a few years in clinics, he added. But he thinks the United Kingdom will fund trials sooner than in the U.S., due to heightened interest there.

Critics, however, say the OHSU technique needs rigorous and lengthy examination, and should provoke more countries to discuss what sorts of research should be pursued.

Darnovksy says that replacing mitochondrial DNA is not that far from replacing DNA in the cell's nucleus — leading to the highly controversial possibility of “designer babies.” She says four healthy monkeys does not rule out nuances that may only emerge in future generations.

“It is a biologically extreme procedure. You're taking apart an egg and putting it back together,” she said. “In the real world, there are slippery slopes, and this one is really slippery with a lot of grease on it. We need brakes to slow ourselves down.”

Jonathan Kimmelman, an assistant professor of biomedical ethics at McGill University in Montreal, says the battle lines on genetic engineering have relaxed in recent years. But he says there's evidence that mitochondrial DNA may play a role in brain function as well as metabolism.

He agreed that if mitochondrial gene therapy is approved, it will be hard to say no to the more controversial cousin of modifying nucleus DNA.

“There's no reason why we should say yes to one and no to the other,” he said.

(Nick Budnick writes for The Oregonian in Portland.)