But whenever he had the time on his off days, the soft-spoken preacher would slip a helmet over his gray hair, don an asbestos racing suit, and climb into the cockpit of a 750-horsepower dragster he built from the ground up. 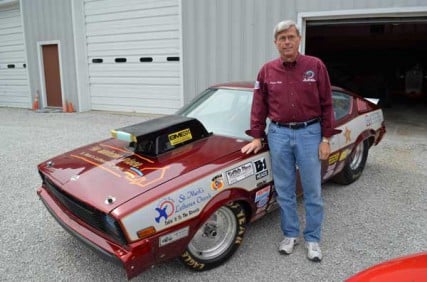 “There is kind of a rush when you launch this thing off the starting line,” Schaefer said, giving his customized 1980 Plymouth Arrow a loving slap. “Your eyes go back in their sockets and they don’t pop back until you’re about at the hot dog stand. Then you can see again. It’s a rush.”

Pastoring a church of 500 had kept him too busy to take the car to Norwalk, Ohio, where he often competes in the Super Gas and Super Pro divisions at Summit Motorsports Park.

Now in his second month of retirement, the 68-year-old minister got to race in the drag strip’s Halloween Classic, a weeklong event that draws 1,500 cars from around the country.

Schaefer usually tops 140 mph in the quarter mile, crossing the finish line in under 10 seconds.

That’s a Sunday stroll in the park compared to the top-level pro dragsters that can pack up to 8,000 horsepower and reach speeds of more than 340 mph on a 1,000-foot straightaway, he said.

But it’s plenty of speed for a “sportsman” or hobbyist like the Racing Rev. 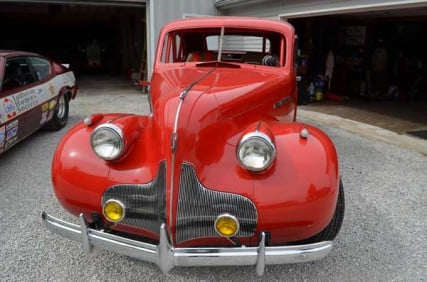 Rev. Dale Schaefer rebuilt this 1939 Buick street rod from “a pile of rust.”

“He is a real car guy — and I mean a real car guy,” said Bill Bader Jr., president and co-owner of Summit Motorsports Park. “With him, I don’t think it matters whether he wins or loses. His winning percentage might not be as high as he would like it to be. But he just loves cars and he loves to race.”

Bader described Schaefer as “without question one of the most quality, caring, genuine human beings I know.”

Schaefer is the track’s chaplain and leads worship services for drivers and families. He also says the invocation before races and has presided at memorial services and other religious occasions at the track.

When he prays before a race, he added, “It’s certainly not to win, but for safety and that I might demonstrate God’s love to somebody else and be a witness.”

Ginger Schaefer, his wife of 46 years, said she supports her husband and his passion for racing 100 percent. “He’s had that hobby since before I met him. It’s like if he didn’t have it, you could cut off his right arm. It’s just a part of him,” she said.

Indeed, Schaefer practically grew up with motor oil pumping through his veins. His father was a mechanic who owned a garage and liked to restore vintage cars.

“He was a perfectionist, and right or wrong, I’ve inherited some of that,” Schaefer said.

He started racing when he was 12 or 13 years old, speeding around a dirt track in a ’49 Studebaker on his grandparents’ farm in his hometown of Salem, Ohio.

By 14, he managed to connive his way onto a real race track, the Quaker City Drag Strip, and built his first race car at age 18.

“It’s just evolved. I keep collecting tools and thinking I need to go faster and faster,” he said with a grin.

As much as he loves the track, Schaefer equally enjoys getting his hands greasy working on cars in the spacious shop behind his rural house.

“I love it. I enjoy it actually more than competing — ‘Wow, it works! Yeah!’” he said, pumping his fist in triumph.

He does most of the mechanical work himself, sometimes taking parts to machine shops or specialty garages.

His bright red 1939 Buick street rod, for example, arrived as a “pile of rust” in 2004, Schaefer said. He stripped it down to bare metal, installed a 455-cubic-inch engine, redid all the electrical wiring, and, after eight years of painstaking effort, is ready to put the finishing touches on the street-legal racing machine.

The ministry was a second career for Schaefer, who started out selling insurance after being discharged from the Army during the Vietnam War era.

He and his wife had been active in church when, in the middle of the night, he said he heard an audible voice asking, “Have you considered my ministry?”

He was convinced God was speaking to him. And he answered back.

“I said, ‘No! But if it’s to happen, you’ll ready my wife for that kind of an adventure.’”

Schaefer said he “never told a soul” about the midnight message. “Two years later, my wife said to me, ‘Have you ever considered full-time ministry?’”

The couple had three young children when Schaefer enrolled in seminary in 1978. He graduated in 1982 and has been an Evangelical Lutheran Church in America pastor until retiring Sept. 30.

Schaefer has submitted a proposal to the ELCA’s Northwest Ohio Synod to fill in for pastors for a month at a time, allowing them to take a needed break with no cost to the church or synod.

He said he doesn’t know of any other ministers who would use the free time to build or race dragsters.

“Most of them are a little more sedate than me,” he said.

News
Study: Biden still leads among Latino Christian voters, but Trump’s support has grown
News
Lutherans ask Trump administration to admit more refugees as deadline looms
Faith
Pope Francis’ team joins up with star athletes like Ronaldo to say: ‘We all run together’
Faith
Kenosha prayer vigil at ELCA church calls for confession, lament and justice for Jacob Blake
News
ELCA Presiding Bishop Eaton lightens up on social media with viral neon Luther rose
© Copyright 2020, Religion News Service. All rights reserved. Use of and/or registration on any portion of this site constitutes acceptance of our User Agreement and Privacy Policy, Privacy Statement and Cookie Notice. The material on this site may not be reproduced, distributed, transmitted, cached or otherwise used, except with the prior written permission of Religion News Service.