PARIS (RNS) For generations, France’s best-known cathedral has been ringing in Masses and Christian holidays with what some people unkindly called the most discordant bells in Europe. 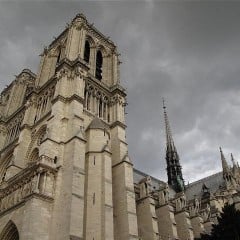 Now, the ear-deafening clangs from Notre Dame Cathedral are being replaced by a newly minted set of bells that will peal out for Palm Sunday and to mark the 850th anniversary of the celebrated Paris landmark.

Weighing in at a massive 23 tons, the nine new bells harken back to Notre Dame’s original chimes, which were destroyed during the French Revolution.

“The idea of this project was to recreate a set of bells that were as great as the ones existing before the revolution,” said Paul Bergamo, head of the Cornille Havard bell foundry in Normandy, which cast eight of the smaller bells in the new set. “Not to recreate an old-style set, but a 21st-century set of bells.”

The largest of the new bells, the “great bell” Marie, was cast in the Netherlands.

Only one of Notre Dame’s original 10 bells has survived. First installed in 1686, 13-ton Emmanuel is the largest of the gargantuan chimes. It has rung out for coronations and to mark the endings of the two world wars.

“You can always find worse bells,” he said of the old ones. “If they were for a medium-sized church lost in the countryside, maybe they could be acceptable. But not for the first church of France.”

Replacing them has been no small feat, complicated by a 1905 law separating church and state, which makes the bells property of the French government and not the Roman Catholic Church.

“That’s probably why it took so long to decide to replace the bells — they were not a top state priority,” Bergamo said. “When a bell is cracked, you have no other choice but to cast a new one. But it’s difficult to make people understand this is useful when a bell is just bad.”

Four of the old bells are now in Bergamo’s foundry as officials decide what to do with them. Notre Dame officials have refused requests from dozens of cultural organizations to adopt them, noting they are not church property.

“They rang for the freedom of Paris in 1945,” Bergamo said. “They don’t ring well, they’re not beautiful, but they’re part of history.”