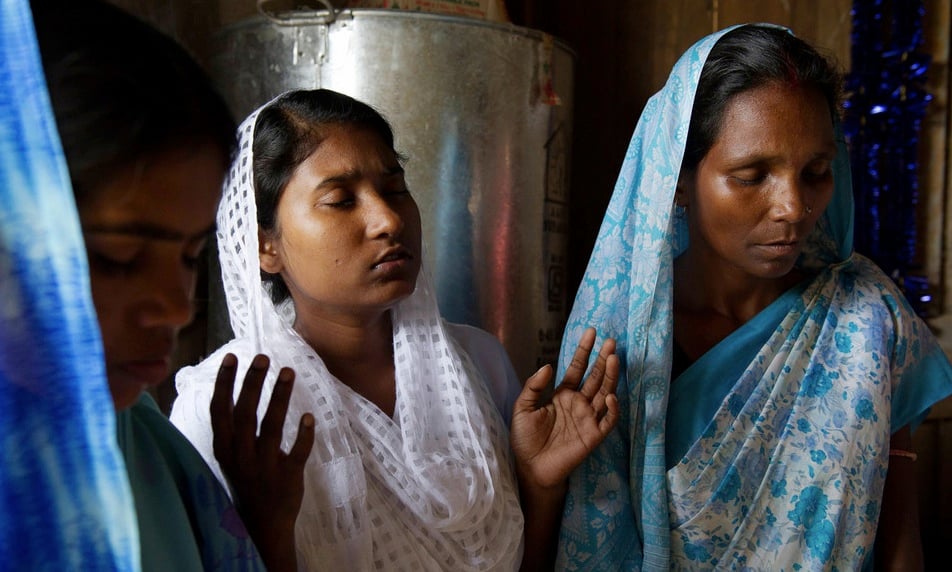 Prayer meetings in homes, like the once pictured here, are common in India. During Holy Week, one such home was targeted by religious fanatics. A Christian family of five was severely beaten, and the mother's hand was cut off.
March 29, 2013
Religion News LLC

CARROLLTON, Texas – On March 27 in the middle of the Christian observance of Holy Week, a band of Religious fanatics burst into the home of Indian Christians, beating all family members and maiming the mother. The family had just sat down to dinner in their home in an undisclosed area of Uttar Pradesh, India, when the attack began.

Every member of the family suffered brutal injuries. Mrs. Survati, the mother, was severely maimed. Attackers severed her hand, cutting it into two pieces. Their 22-year-old daughter, Archana, was badly beaten and her hand fractured. The father, Ramnath, and daughter Antika were also beaten, and Arvind, their 20-year-old son, suffered injuries that rendered him unconscious.

Neighbors came to the aid of the family and admitted them to a hospital where they are all currently receiving medical aid.

“The blood of the martyrs is the seed of the church,” said K. P. Yohannan, Gospel for Asia (www.gfa.org) founder and president. ‘Persecution and suffering, the way of the Cross—this is what Christ promised us, and I am convinced nothing is going to stop his Church.”

Bablu, a Gospel for Asia-supported pastor, ministers to about 200 believers spread over this area of India. Because some live long distances away, the pastor conducts prayer meetings in various locations in believers’ houses, including the home of this persecuted family. Religious militants have targeted these prayer host homes for attacks.

All evidence points to a strategy of violence to eliminate Christians from this village. The group of fanatics is currently focused on a planned attack on Pastor Bablu, waiting for him to return to other houses in the area where he often preaches or holds prayer services.

Indian Christians in this area are actively joining believers around the world focusing on the most holy week of the Christian calendar, commemorating the passion, crucifixion and resurrection of Jesus.

“John 12:24 tells us, ‘Unless a grain of wheat falls into the ground and dies, it remains alone; but if it dies, it produces much grain.’ Jesus died and rose again. Through our choice to enter into the suffering of Christ, we are given the privilege to bring the Good News of hope,” said Yohannan. “This family experienced this privilege, and the Lord will use it to build his Kingdom.”

Gospel for Asia (www.gfa.org) is a mission organization based in Carrollton, Texas, involved in sharing the love of Jesus across South Asia.

To schedule an interview with a Gospel for Asia official, contact Taun Cortado at 972-300-3120 or [email protected].