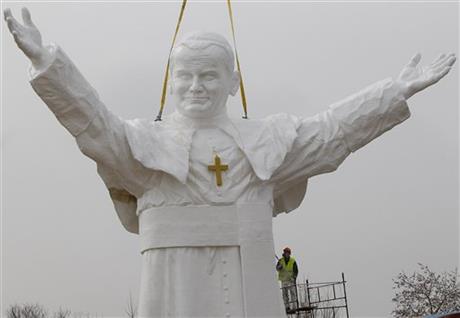 Statue of the late Pope Jon Paul in Poland, via The Associated Press
April 10, 2013
David Gibson Statue of the late Pope Jon Paul in Poland, via The Associated Press

Guild privilege: Let’s start with a death, or rather the remembrance of a life, that of the extraordinary McCandlish Phillips, a New York Times reporter and devout Christian who in his journalistic prime left the Gray Lady – and a reputation as a remarkable wordsmith – to spend his final years in ministry in Manhattan.

Phillips major coup was exposing a Klan leader who was a born and raised Jew – a story that led the man to commit suicide. Phillips said that was God’s judgment. What would you have done? How would you have felt? Tough questions.

Legislation on immigration reform and gun control are actually, finally, moving ahead in Congress.

The gun-toting Episcopal bishop (yes, there is such a thing) of Oklahoma confesses that he is evolving toward greater acceptance of weapons regulation, and Baptist ethicist Bob Parham wants to drop the “i-word” – “illegal” – from the immigration lexicon.

Richard Land is leaving his Southern Baptist post as policy point man but he’s not going quietly, telling the Obama administration that requiring health insurers to cover contraceptives “is a form of religious persecution.”

Tough talk as well from Kentucky Sen. Mitch McConnell and his aides who were recorded plotting to attack Ashley Judd’s faith when it appeared the actress might try to run against McConnell. “The people at Southeast Christian (Church) would take to the streets with pitchforks,” one McConnell aide says of Judd's religious views, which prompts laughter.

I wonder if the folks at Louisville's Southeast Christian are laughing. McConnell is not, and the FBI is investigating.

Kentucky’s other senator, Republican Rand Paul, says America needs “a spiritual cleansing.” I think there’s a spa that does that.

On a related note, a Romanian man is suing his Orthodox bishop for failing to exorcise flatulent demons from his home.

In North Carolina, meanwhile, religious minorities are still leery even after a bill to endorse a state religion (think: Jesus) was pulled.

At Religion Dispatches, Shanny Luft goes counterintuitive and says yanking the bill was a mistake – if it won, the governmental embrace would have suffocated Christianity and given secularists a huge win.

Our Eye-Opening Read of the Week: Interfaith marriages are on the rise, but is that a good thing for faith -- or marriage? Naomi Riley, author of a new book on the topic -- and an intermarried herself -- takes to the NYT op-ed pages to explain it all for you.

Eye for an eye, maybe. But Saudi Arabia says that news reports were wrong and it wasn’t going to paralyze a man who 10 years ago stabbed a friend when he was 14 and left the friend paralyzed.

Michelle Malkin isn’t ready to be so merciful. Even though jailed lawyer Lynne Stewart reportedly has stage-4 breast cancer, Malkin doesn’t want her to be freed because she still needs to pay for sneaking messages out from the Islamist terrorists she was representing.

“Now she wants mercy, medical comforts and freedom? No, hell, no. This messenger gal for murderous barbarians made her prison bed. Die in it,” says the conservative commentator.

Okay, on other topics, we look at two interesting Catholic priests: one a U.S. Army chaplain and possible saint who died in a Korean POW camp and is getting a big honor from the White House; the other a priest and Hollywood producer who is very much alive, and surviving the entertainment industry. Now that’s a miracle.

None of these priests is as big as the late John Paul II, and I mean that literally. A white (natch) fiberglass statue of the Polish pope, over 45-feet tall, is set for completion in the southern Polish city of Czestochowa, site a the country’s most important shrine. (AP photo above)

Then again, the new pope, Francis, is as big as Jesus: Father Jim Martin (a Jesuit like Francis, hmmmm….) is promoting the WWPFD meme, as in What Would Pope Francis Do? How about this: Can a Catholic hoops conference save college sports? Read my story.

France’s chief rabbi, Gilles Bernheim, says he won’t quit despite admitting to plagiarism and other deceptions.

No worries on that score here – we get everything from somewhere else, but we give credit where credit is due. Join the fun by subscribing below to the daily religion roundup. It's free.