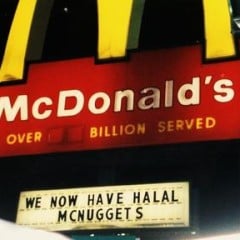 President Obama will be in Boston this morning to once again try to console the grieving victims of mass murder.

First Lady Michelle Obama is expected to join the president for an interfaith service titled “”Healing Our City,” which will be held at the Cathedral of the Holy Cross in Boston’s South End.

You can watch the service live here. We’ve embedded the program at the bottom of this post.

People are already lined up for 10 blocks around the cathedral to attend the service, the Boston Globe reports.

Pope Francis tweeted his prayers for the victims of the deadly factory explosion in Texas, in which hundreds were hurt and as many as 15 are feared dead.

Continuing an early theme of his papacy, Francis told Argentine bishops yesterday that “A church that does not go out of itself sooner or later sickens from the stale air of closed rooms.”

The new pope was one of three religious leaders picked in Time’s list of the world’s most influential people. The others are the Rev. Wilfredo De Jesus, a Pentecostal pastor in Chicago, and Fethullah Gulen, a Turkish educator and Islamic scholar.

As a bi-partisan group of Senators introduced an immigration bill on Wednesday, evangelical activists spread across Capitol Hill to lobby for it.

A majority of pastors doubt Global Warming, according to a new LifeWay poll. As Christianity Today notes, younger pastors are the biggest skeptics.

An Indiana truck driver and former Marine was sentenced to 20 years in prison and ordered to pay $1.4 million for setting fire to an Ohio mosque.

Also in Ohio, an elementary school pulled its Mindfulness program after parents complained that, “They were taking valuable time away from education to put students in a room of darkness to lay on their backs.”

A plan to restore the original structure that held King Herod’s tomb at Herodion in the West Bank has been scrapped, the Forward reports.

A statue depicting a homeless Jesus can’t find a home in Canada.

A study that tracked more than 12,000 Canadians over a period of 14 years has found that regular attendance of religious service lowered the risk of depression.

A former Jesus Freak traces the history of Christian rock, from Larry Norman to MercyMe.

A Michigan court ordered McDonald’s to pay Muslims $700,000 for falsely advertising their chicken as halal. Frankly, I’m a little surprised that it’s chicken.