(RNS) A salad dressing ad that leaves a little to the consumer imagination has drawn the ire of conservative Christians who object to having a nearly naked “Zesty Guy” be the life of the picnic.

Adweek reported on the “Shame on Kraft” campaign by One Million Moms, an arm of the American Family Association, which issued a tart rebuke to the food giant’s current print advertising for its “Zesty Italian” salad dressing. 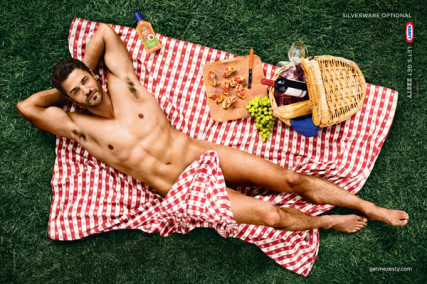 The “Shame on Kraft” campaign by One Million Moms, an arm of the American Family Association, goes after the nearly naked “Zesty Guy” in the latest Zesty Italian salad dressing ad. Photo courtesy Kraft Foods

The magazine ad stars birthday-suited model Anderson Davis (“The Zesty Guy”) sprawled across a red-and-white checkered picnic tablecloth, a corner of which strategically covers his male signifier. He lounges beside a basket, a bottle of wine, grapes, bread and, least prominently, the product he’s serenely hawking.

Not taking the affront lying down, OMM declared it “the most disgusting ad on the inside front cover that we have ever seen Kraft produce.”

This is the same group that recently took affront to the NBC sitcom “Save Me” starring Anne Heche as a housewife who sees herself as a prophet of God.

“A full 2-page ad features a n*ked man lying on a picnic blanket with only a small portion of the blanket barely covering his g*nitals. It is easy to see what the ad is really selling.”

(OMM said it used asterisks to get past certain spam filters.)

The organization’s dressing down continued:

“Kraft has gone too far and will push away loyal, conservative customers with this new ad campaign. Christians will not be able to buy Kraft dressings or any of their products until they clean up their advertising. The consumers they are attempting to attract — women and mothers — are the very ones they are driving away. Who will want Kraft products in their fridge or pantry if this vulgarity is what they represent. One Million Moms cannot get over the gall of this company. It is unnecessary for Kraft to use s*x to sell salad dressing!”

Naturally, Kraft Foods defends its “Let’s Get Zesty” campaign, which has shaken up a certain video channel.

The ad “is a playful and flirtatious way to reach our consumers. People have overwhelmingly said they’re enjoying the campaign and having fun with it,” said the conglomerate, based outside Chicago.

Kraft and “The Zesty Guy” are loving the exposure, if Twitter feeds are any measure.

As always, sex does indeed sell.

News
Christian group asks Netflix to pull ‘13 Reasons Why’ after teen suicides
Culture
#BoycottTarget reaches 500,000 signers
Beliefs
Guardians of ‘Christmas cred’ reap publicity, donations, struggle with Cyber Monday
Beliefs
Reddit charity vote can stir pro- and anti-gay passions
Beliefs
The Bibles are back: Navy lodges scuttle removal plan
© Copyright 2020, Religion News Service. All rights reserved. Use of and/or registration on any portion of this site constitutes acceptance of our User Agreement and Privacy Policy, Privacy Statement and Cookie Notice. The material on this site may not be reproduced, distributed, transmitted, cached or otherwise used, except with the prior written permission of Religion News Service.