WASHINGTON (RNS) Just days after the Obama administration issued final rules to religious groups for its contraception mandate, a broad coalition spearheaded by Catholic and Southern Baptist leaders is pushing back, saying the rules threaten religious liberty for people of all faiths.

In an open letter titled “Standing Together for Religious Freedom,” the group says the final rules from the U.S. Department of Health and Human Services violate their freedom of conscience.

“We simply ask the government not to set itself up as lord of our consciences,’’ said Russell Moore, president of the Southern Baptist Convention’s Ethics & Religious Liberty Commission. He was joined by Archbishop William E. Lori of Baltimore at a news conference at the National Press Club. “HHS is forcing Citizen A, against his or her moral convictions, to purchase a product for Citizen B,” reads the open letter signed by dozens of leaders from evangelical, Orthodox, Mormon and Hare Krishna groups. “The HHS policy is coercive and puts the administration in the position of defining — or casting aside — religious doctrine. This should trouble every American.”

The Affordable Care Act requires most employers to provide contraception coverage to staffers at no cost.

The signatories want HHS “at a minimum” to expand the exemption to “any organization or individual that has religious or moral objections” to the mandate. They also asked Congress to prevent similar regulations from being enacted in the future.

The letter notes that many of the signatories are not doctrinally opposed to the use of contraception but nevertheless are concerned that the civil liberties of others will be compromised by the rules that will take effect  on Jan. 1, 2014.

HHS declined to comment due to ongoing litigation. The controversy has fueled 60 lawsuits, many from religious colleges that do not want to offer staff or students contraception coverage.

The final rules exempt groups designated as a “religious employer” — houses of worship and affiliated religious nonprofits — from the mandate, but private businesses owned by religious employers are not exempt. The rules also call for insurers, or third-party administrators, to provide contraceptive coverage for nonprofit religious organizations that object to the coverage.

Lori and Moore, who last month welcomed the introduction of a proposed Health Care Conscience Rights Act, criticized the government’s definitions of what is “religious.” 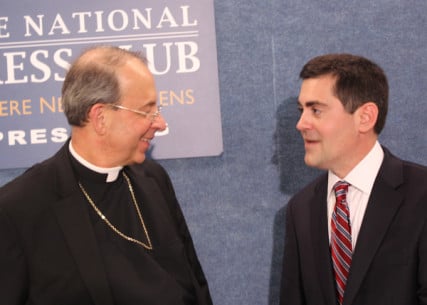 “We in the Catholic Church have never seen such a distinction between what we do within the walls of a church and how we serve our neighbors,” said Lori, chair of the Catholic bishops’ Ad Hoc Committee for Religious Liberty. “The faith by which we worship on Sunday is the very same faith by which we act in the world the other six days of the week.”

The letter penned by the coalition asks: “If the federal government can force morally opposed individuals to purchase contraception or abortion-causing drugs and devices for a third party, what prevents this or future administrations from forcing other Americans to betray their deeply held convictions?”