ST. LOUIS (RNS) Sarah Decareaux was lying on the cold, concrete floor of a barn.

She closed her eyes, curled her knees into her chest, and told herself that what was happening wasn’t real. 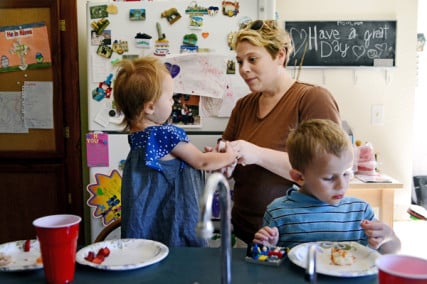 Sarah Decareaux feeds her children Elise, 2, and Finn, 4, at their home in Millstadt, Ill., on Wednesday, May 22, 2013. Sarah lost her husband David Decareaux and her other two boys, Dominic, 10, and Grant, 8, after they died from the cold during a hiking trip on the Ozark Trail. Photo by Erik M. Lunsford/St. Louis Post-Dispatch

She felt claustrophobic. She was having trouble breathing. Her vision tunneled, the same way it had when she’d been in labor. She could see only a few feet in front of her.

When she found oxygen for a moment, she screamed at God.

“You can’t do this!” she remembers yelling. “Warm them up, God. You do miracles. Do one! Right now!”

It was a Sunday morning in January. Sarah, her husband, David, and their five children were spending the weekend at Brushy Creek Lodge on the Ozark Trail, near Black, Mo. The day before, David, 36, had taken two of the children — Dominic, 10, and Grant, 8 — on a hike. They never returned.

The weather had worsened, with temperatures plummeting and rain pounding down as they walked. They would eventually freeze to death.

After officials found David and the boys, Brushy Creek employees took Sarah to a nearby barn, to get her away from the police radio chatter. She collapsed there, and begged God for help.

And then, she says, God answered her: They’re not coming home with you. They’re with me now. Get off the floor.

In that moment, curled into a fetal position, Sarah made a deal with God.

“If I accept this, then you’d better be with me,” she said.

And then she got up.

Many Evangelical Christians have a story of conversion they tell others, a “testimony” or “giving witness,” which sometimes involves hardship, grief or trauma. At Bible studies, Sarah was always embarrassed that her story was boring.

Sarah met David, who was from a Catholic family in Louisiana, in 2000. She was a student teacher in Columbia, Ill., and he was working at Scott Air Force Base as an information technology specialist.

Just five weeks later, they married. By March 2001, they were stationed in Portugal. It would be the first of many moves for the couple as David continued in his IT career with the Air Force and, later, as a civilian contractor.

Faith was a strong bond in their marriage, and on their third anniversary, David was rebaptized, born again into the evangelical tradition.

As she watched her husband’s enthusiasm grow for the gospel message she’d embraced as a little girl, Sarah’s own faith was invigorated. David, Dominic and Grant left the cabin at Brushy Creek about 11 a.m., on Saturday, Jan. 12. David had on a light jacket, one of the boys wore a fleece pullover and the other a sweater. It was a sunny morning, and temperatures hovered around 60.

They reached Sutton’s Bluff, eight miles away, about 2 p.m. Rain began falling, and they started heading back to the cabin along the trail, a two-foot-wide, hilly path covered with a carpet of leaves. The drops became a deluge, and creeks began to flood. As darkness fell, temperatures dropped into the 20s.

David’s cellphone and flashlight eventually lost power. As he and the boys walked, David built rock mounds and left orange peels to mark their route.

Officials suspect that, based on where their trekking poles were ditched, David carried the boys at some point, up to a mile, including across a raging creek. Dominic weighed 70 pounds and Grant weighed 30.

By the end, maybe because he thought the boys were already dead or maybe they were unconscious and he thought the best move was to proceed for help, David laid his sons next to each other on the trail. He covered them with his jacket, and then Army-crawled 20 more feet — mud was caked on his forearms and in his belt-line — until he could go no farther.

In the dark and cold and rain, they had missed the turn in the trail that led back to the lodge — but not by much. Had they caught it, they would have been just 20 minutes from their cabin.

After years of criss-crossing the globe, David and Sarah and their five kids moved in 2012 to Millstadt, Ill.,where David got a job as a civilian at Scott Air Force Base. In January, to celebrate their 12th anniversary, he surprised Sarah with a family trip to Brushy Creek Lodge.

Among her children, Dominic was “an old man in a little boy’s body,” Sarah recalled. He was fascinated with history, especially war and battlefields.

Grant was small for his age and still very much a mama’s boy. His fascination was animals, and whenever the family went for a walk, Grant would put on his zookeeper’s vest and pull out a notebook to document all the animals, real and imaginary, that he came across.

Dominic and Grant were both also Cub Scouts. Their dad was a Scout leader.

The search for the missing hikers proved difficult. When David and the boys didn’t return to Brushy Creek by 6 p.m. Saturday, the Reynolds County sheriff formed a search party. But darkness and rain impeded their efforts. They called off the search after midnight and resumed at dawn.

Sarah was in the Brushy Creek office at 10 a.m. Sunday when word came in from the search party: “We found them.”

“Oh, thank God,” said a woman in the office.

Sarah began crying. A burden that she hadn’t allowed herself to acknowledge, but that she’d been carrying since the previous evening, fell from her shoulders. They were alive.

Then the woman picked up the receiver. “OK,” she said. Her face hardened with each repetition of the word. “OK. OK. OK.”

The woman handed the receiver off, and grabbed Sarah’s hand.

Sarah’s mind went immediately to the unimaginable. If she asked about the worst, she figured, an answer confirming anything else would be better.

“Is my family dead?”

The woman’s face told her everything.

When officials found the bodies that Sunday morning, they pronounced David dead.

They contemplated doing the same for the boys, Sarah said, but decided it was worth attempting CPR. The boys were taken to a nearby hospital and pronounced dead there.

About 2 p.m., Sarah was led into a room where her sons were. She lay down next to them and said goodbye. Then she was taken to the coroner’s office to say goodbye to her husband.

“I don’t think a human being was designed to withstand this kind of trauma,” Sarah said. “How did I do that? How did I lie there with those little-boy bodies? How did I see my husband, this vibrant, handsome man, lying there dead?”

Three of the first responders who found David and the boys later called Sarah separately. They confirmed for her details about how the bodies were found, and in doing so constructed a story of heroism and hell. “Your husband was a determined man,” one told her.

As much as some those details comforted Sarah, her imagination at times took her to those final hours. She envisioned David’s anger that God had stranded his sons.

And too often she imagined their physical pain.

For a few weeks afterward, when the temperatures would dip into the 30s and rain would fall, Sarah sometimes went out onto her porch in a T-shirt.

“I stood in the rain for as long as I could take it,” she said. “I wanted to feel what they felt.”

Christians believe Jesus’ death on the cross redeemed humanity, liberating it from sin and evil.

“Christ’s own suffering drives Christian life,” said Mark Ryan, a professor of religion and culture at Covenant Seminary in Creve Coeur, Mo. “If we believe that story, it enables us to make a limited sense of evil and suffering.”

For Sarah, an explanation for how she moves forward comes not only from God’s love but also from a deep belief in God’s mysterious plan.

“He wants to use us for a purpose,” she said. “I don’t know why he would do that to us, to serve some purpose, but I know there is one.”

At least a dozen times in the last four months, she has written in her journal: “Profound loss has to have a profound purpose.”

In the wake of the accident, some critics questioned whether David had checked the weather forecast or why he had taken the boys on such a long hike.

But Sarah places her trust in God, praying for a sense of peace. “A dozen things could have saved their lives, and not one of them did,” she said. “It was their time.”

For now, Sarah knows her top responsibility is to raise her three children. Kate is 11, Finn is 4 and Elise is 2. Pictures of their father and brothers are strewn around the house. Sarah reads to the children, mostly books about heaven.

The family was so new to the area that they hadn’t yet chosen a church. But support has come in waves, especially from the Scott Air Force Base community. The home-school group Sarah belongs to collected enough money to cover the family’s first three house payments.

They bought Sarah a new dishwasher when hers broke. They came to help with laundry, to mow the lawn, to bring groceries, to sit and talk. Cards, checks and pieces of Scripture came in the mail, much of it from strangers.

“In the first three months,” Sarah said, “I literally did not have to ask for anything.”

Becky Lowe, who has known Sarah since they were 10, has watched, amazed, as her friend copes with the unthinkable.

“She’d be the first to tell you that without God she couldn’t do this,” Lowe said. “But she’s so good at recognizing God in the turmoil.”

There have, of course, been low moments — times when Sarah doesn’t want to get off the couch for hours or days. In those moments, she asks God: “Was that really you? Were you really there with me in the barn?”

The answer, she believes, is yes. God has spoken to her about her husband and sons: This was not the end of them; they’re very much alive; they’re with me now.

Whenever the Decareaux family went out on weekend excursions Sarah and David had a system.

They’d see each other from a distance and hold up the number of fingers corresponding to the number of squirmy children each had their eyes on. If Sarah held up two fingers — “I’ve got two” — and David held up three, they knew they had the full set accounted for.

She believes God is holding up his end of the deal.

“Just like Dave and I used to hold up our fingers to tell each other how many we had, I really feel he’s got those two and I’ve got these three,” she said. “We’re very much a family of seven. And we always will be.”

(Tim Townsend writes for The Post-Dispatch in St. Louis) 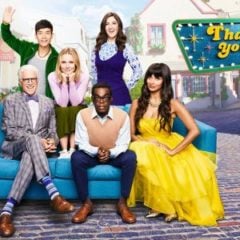 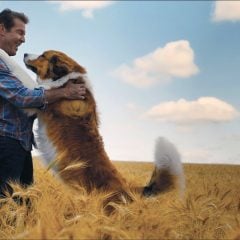 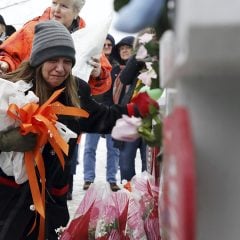