Reading from Numbers 32: 20-22, Copeland said, “So this is a promise — if you do this thing, if you arm yourselves before the Lord for the war … you shall return, you’re coming back, and be guiltless before the Lord and before the nation.”

“Any of you suffering from PTSD right now, you listen to me,” Copeland said as Barton affirmed him. “You get rid of that right now. You don’t take drugs to get rid of it. It doesn’t take psychology. That promise right there will get rid of it.”

Barton added that many biblical warriors “took so many people out in battle,” but did so in the name of God.

“You’re on an elevated platform up here. You’re a hero, you’re put in the faith hall of fame,” Barton said. “… When you do it God’s way, not only are you guiltless for having done that, you’re esteemed.”

PTSD has been a recurring issue among military veterans. The U.S. Department of Veterans Affairs classifies PTSD as a mental health problem that can occur after a traumatic event like war, assault or disaster. In 2011, 476,515 veterans who were diagnosed with PTSD received treatment at VA medical centers and clinics.

“It is obvious that they do not have knowledge of the condition,” said Warren Throckmorton, a Grove City College psychology professor who has written on Barton. “Copeland and Barton err theologically as well by taking specific Scriptures written in relationship to Israel and apply them to American armies.”

This isn’t the first time Copeland and Barton have been “profoundly ignorant about theology and history,” said Joe Carter, an editor and communications director for the Southern Baptist Convention’s Ethics and Religious Liberty Commission.

“But for them to denigrate the suffering of men and women traumatized by war — and to claim biblical support for their callow and doltish views —  is both shocking and unconscionable,” Carter said. “Rather than downplaying the pain of PTSD, they should be asking God to heal our brothers and sisters.”

Barton has been a controversial figure in some circles. Texas tea partiers recently launched a movement to draft him to mount a primary challenge to Texas Sen. John Cornyn next year. Barton recently linked legal abortion to climate change.

In a recent program, Barton said half of students in Christian colleges leave church due to pagan professors. Last year, Christian publisher Thomas Nelson, citing a loss of confidence in the book’s details, ended the publication and distribution of Barton’s best-seller, “The Jefferson Lies.”

A church led by Copeland’s daughter was recently linked to a measles outbreak. Terri Copeland Pearsons and her father have preached against vaccines. 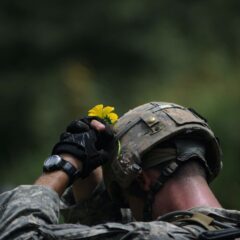 Religion Hub
20 years of ‘forever’ wars have left a toll on US veterans returning to the question: ‘Did you kill?’