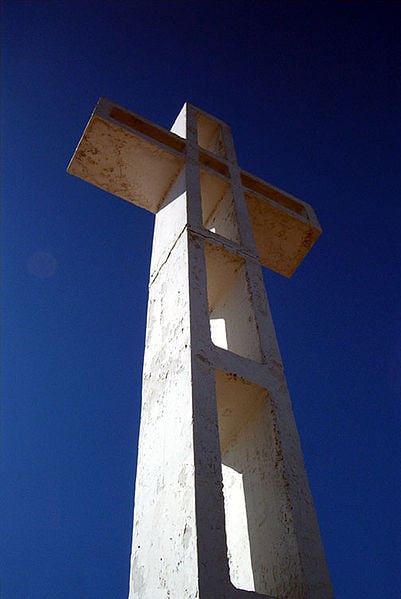 ‘Tis the season to be fighting over religious displays on public land, so it was fitting that the San Diego federal judge who upheld the constitutionality of the cross on Mt. Soledad a few years ago turned thumbs down on it yesterday. In all likelihood, the long-running controversy will end up being decided by the U.S. Supreme Court.

Erected in 1954, the cross is the third in a series that began in 1913, when a group of private citizens placed a wooden cross on the site in the Mt. Soledad Natural Park in La Jolla. It was long known as the Easter Cross, and in its several versions served as a place for intermittent Christian worship. Then, in 1989, a lawsuit was filed charging violations of both the state and federal constitutions and two years later a federal judge found in favor of the plaintiffs.

Subsequently a variety of ways to preserve the cross were sought, including turning the site into a full-blown veterans’ memorial and transferring ownership of the property to the federal government. But in 2011 the Ninth Circuit Court of Appeals ruled against it, and the Supreme Court declined to accept the case the following year. Yesterday’s decision by Judge Larry Burns was made under terms prescribed by the Ninth Circuit.

Establishment Clause doctrine regarding public religious displays is in sufficient flux that the Supreme Court could decide to let the Mt. Soledad cross stand. For now, however, the operative principle is that displays on public land are impermissible if they suggest a government endorsement or preference for a particular religious belief or practice. That’s why Allegheny County (1989) crucially distinguishes between a single religious display and multiple ones in a given public place. The former suggests a governmental religious preference; the latter, mere recognition of the populace’s plural religious commitments. In line with that principle, officials at Shaw Air Force Base in South Carolina the other day removed a Nativity Scene set up near a lake on the base when no non-Christian group saw fit to place a holiday display of its own on the site.

What’s going on here is a fight over Christian claims on the country’s civic spaces. As those claims are contested, in court and elsewhere, there’s push back, most evident in the annual railing against the supposed war on Christmas. What’s seems to be prevailing is not a secular public square limited to civic symbols accessible to all, but a Pantheon for everyone’s spiritual wares. Consider the grounds of the Capitol in Oklahoma City, where a Ten Commandments monument installed under a 2009 law may soon be joined by a Satanist memorial and a statue of the Hindu monkey god Hanuman.

“I stand by my comments that we are a faith-based nation,” said Rep. Earl Sears (R- Bartlesville), “and I know that once you open the door on this sort of thing that you can’t know where or how it will end up.” Like it or not, the door is now wide open.