Does historical accuracy matter at Christmas? Or is this story about a different kind of truth?

No, I’m not asking about Megyn Kelly’s obsession with Jesus’ or Santa’s race. My questions came to mind a I wrote about a new survey by the Public Religion Research Center and Religion News Service. 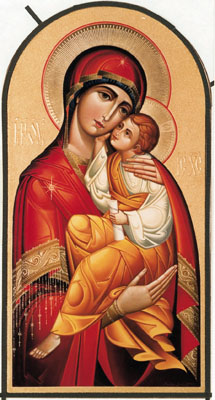 Most Americans, including many who say they have no religion, still believe Jesus was born to a virgin. This Greek icon of Theotokos depicts the Virgin Mary and the child Jesus. Photo by Nick Crettier, courtesy of National Shrine of the Immaculate Conception

The RNS/PRRI survey finds the number of people who say “the story of Christmas – that is, the Virgin birth, the angelic proclamation to the Shepherds, the Star of Bethlehem, and the Wise Men from the East — is historically accurate” has plummeted more than 17 percentage points in the last nine years. It fell from 67 percent in a Newsweek survey to 49 percent in the new PRRI poll. Another survey, released Wednesday by Pew Research, found a high level of belief in the Virgin birth — and a lot of folks who believe Santa will visit their house Christmas Eve.

The late Sir John Templeton endowed a foundation that spends millions in supporting many kinds of educational and medical research but may be best known for his interest in what he called advancing spiritual knowledge. I participated for several years in a Templeton program for science and religion journalists but never saw “proof” of God – or “proof” of no God either.

But what if Jesus and God are theologically “true” if not scientifically so?

Jump in here with your views but remember the Faith & Reason rule: All views respectfully presented are welcome. So post early, post often, and share this with your friends. Even better, subscribe to F&R so it comes to your email.

Posted in
Beliefs Cathy Lynn Grossman: Faith and Reason Culture Opinion
Get the RNS spiritual guide to the 2020 election