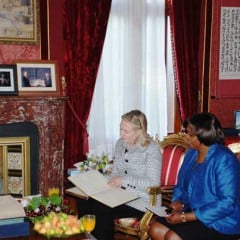 WASHINGTON (RNS) It’s been three months since the Rev. Suzan Johnson Cook resigned as the State Department’s religious freedom watchdog, and those who decry religious persecution in Syria, Sudan and elsewhere are wondering how long it’s going to take the White House to name a new ambassador-at-large for international religious freedom.

Many in the field hope it’s someone with more diplomatic background than Johnson Cook, a former Clinton administration official and popular Baptist minister whose international experience was mostly acquired on the job.

The other factor: the more than two years it took for the Obama administration to choose Johnson Cook and to get her confirmed by the Senate.

“A continued vacancy will confirm the suspicion that already exists among foreign governments, persecutors, victims and American diplomats that the issue is not a priority,” said Thomas Farr, director of the Religious Freedom Project at Georgetown University’s Berkley Center for Religion, Peace, and World Affairs.

The White House has been tight-lipped about the timeline for a decision, as well as about any candidates it may be considering for the position, which Congress created in 1998 to highlight and alleviate religious persecution worldwide. 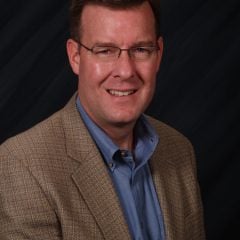 Here’s a short list of five names swirling around Foggy Bottom, culled from experts who work in the field and were asked who they see as likely to be under consideration, or as particularly qualified for the job.

His father, Robert Seiple, was the first ambassador-at-large for international religious freedom and with his wife founded the Institute for Global Engagement, which Chris Seiple now heads. IGE is a Christian think tank that sponsors work in developing countries to establish religious tolerance as a societal value. The younger Seiple founded the Review of Faith & International Affairs and co-founded The International Religious Freedom Roundtable. The former Marine infantry officer is a Baptist. Katrina Lantos Swett, chair of the U.S. Commission on International Religious Freedom, testifies March 15, 2013 on Capitol Hill and holds up a photo of Baha’i leaders who have been sentenced in Iran to 20 years in prison. To her left is Jay Sekulow, chief counsel of the American Center for Law and Justice, who urged the release of Iranian-American minister Saeed Abedini from a Tehran prison. RNS photo by Adelle M. Banks

Swett is vice chair of the U.S. Commission on International Religious Freedom, an independent body created by the same act of Congress that created the ambassador-at-large position. She is also president of the Lantos Foundation for Human Rights & Justice, named for her late father, Holocaust survivor and former congressman Tom Lantos. Lantos Swett is married to former Democratic Congressman Richard Swett. She has worked as a lawyer for the Senate Judiciary Committee and holds a doctorate in history. Swett is Mormon.

Stahnke is an attorney and director of policy and programs at Human Rights First, a nonprofit that presses the U.S. to protect basic freedoms abroad. He served as deputy executive director for policy and acting executive director of the U.S. Commission on International Religious Freedom. He has also served on official U.S. delegations to U.N. and other human rights conferences. Stahnke has authored, among other articles, “Religion-State Issues and the Right to Freedom of Religion or Belief: A Comparative Textual Analysis of the Constitutions of Predominantly Muslim States.” Stahnke is a Buddhist. 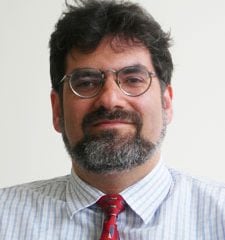 Kurt Donnelly is a career foreign service officer now serving in Brussels as political adviser to the U.S. Mission to NATO. He directed the State Department’s Office of International Religious Freedom under former Ambassador-at-Large John Hanford and oversaw the office during a five-month vacancy. His other posts have included Turkey, Hungary, Russia and Afghanistan. He also served for two years as the director for Central Asia on the National Security Staff. Donnelly is Presbyterian. 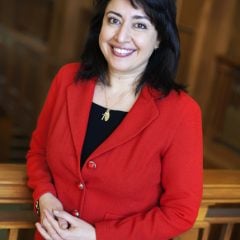 A professor of international law at the University of Oklahoma, Evelyn Aswad worked at the State Department for 14 years, both in its legal office and as head of the Office of Human Rights and Refugees. Photo courtesy Evelyn Aswad

The ambassador-at-large position does not report directly to Secretary of State John Kerry, as do other ambassadors-at-large, further evidence to those who argue that the State Department needs to take the plight of the religiously oppressed more seriously.

But a newcomer in Foggy Bottom, Shaun Casey, has helped quell some of that criticism. Kerry appointed Casey, a professor of Christian ethics at Wesley Theological Seminary in Washington, to head a new Office of Faith-Based Community Initiatives. He reports directly to Kerry, and in many circles is seen as having more influence than Johnson Cook or anyone who would succeed her. 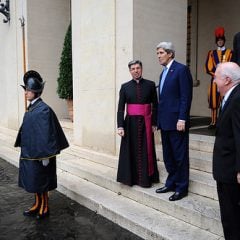 U.S. Secretary of State John Kerry bids farewell to Vatican Chief of Protocol Monsignor Jose Bettancourt after he gave U.S. officials a tour of the Vatican and Apostolic Palace in Vatican City during a visit to Rome, Italy, on Tuesday (January 14). Photo courtesy U.S. Department of State

“But it would certainly be helpful if Shaun Casey could actually get the process moving and use his new position to fill the other one.” Government & Politics
A big loss for moderate evangelicalism
Follow us on Facebook!
Submit your photos to RNS