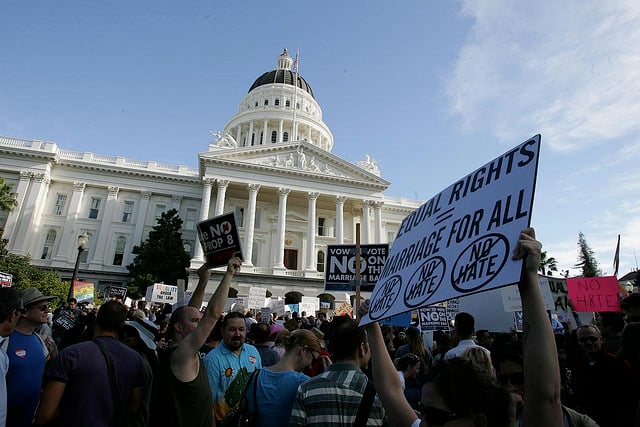 People upset by the passage of Proposition 8, the anti-gay marriage initiative, protest at the California State Capitol in Sacramento on November 9, 2008.
April 7, 2014
Katrina Trinko

(RNS) Should the 7 million Californians who voted for Proposition 8 in 2008 all be fired?

I'm not joking -- or even fear-mongering.

People upset by the passage of Proposition 8, the anti-gay marriage initiative, protest at the California State Capitol in Sacramento on November 9, 2008.

Thursday (April 3), the chief executive of Mozilla, Brendan Eich, resigned his job due to intense pressure from activists who want to redefine marriage. What outraged the activists was something Eich did six years ago: He made $1,000 donation in support of Proposition 8, which defined marriage as between a man and a woman. Eich's views on same-sex marriage earned him the ire of dating website OkCupid, which drew attention to Eich's position by urging their members not to use Mozilla's internet browser, Firefox, to visit the dating site.

Eich's position, let us remember, is not some extreme mindset. It is a position that until 2012 was shared by none other than President Barack Obama (who only announced his evolution after Vice President Joe Biden's comments on the topic made it impossible for him to dodge the question any longer). Across the country, thirty-three states define marriage as a union of a man and a woman.

In California, it was not some small, bigoted population that voted for Proposition 8, but a diverse coalition. According to exit polls, seven out of ten African-American voters backed Prop 8, as did over half of Latino voters.

And now, just six years later, supporting Proposition 8 is a position deemed by some to be so extreme that a company apparently felt they could not justify having a CEO who believed that.

Regardless of your views on same-sex marriage, is that the culture you want, one where those who disagree that marriage should be redefined feel they cannot vote or speak according to their beliefs, where they are societal outcasts because of this one position?

Diversity of views is a hallmark of American life. We don't agree on taxes, income inequality, welfare, Obamacare and a thousand other issues – and so we debate them in elections, on talk shows and in town halls. That's how it should be.

But we shouldn't call for those who disagree with us to be fired and excluded, banished from polite society.

The disagreement over same-sex marriage is not about bigotry toward anyone. It's about what marriage is. Many people, whether by reason of religious beliefs or secular traditional views, see the institution of marriage as being between a man and a woman. They believe that children are best served by having a mother and a father.

Americans' views on the matter may continue to evolve. (Or, as in the case of abortion, it might happen that views settle and the country ends up divided for the long-term on this issue.) But it's not an idea that should oust people from the public square.

We often work with people whose views we don't agree with, people who have views on matters ranging from religion to politics to whether it's ok to give a child a pacifier or whether Justin Bieber should be deported. We shouldn't bully our co-workers -- and our other fellow Americans -- into agreeing with us.

Instead, the goal should be to change hearts and minds -- one genuine conversation at a time.

(Katrina Trinko, a member of USA TODAY's Board of Contributors, is managing editor for The Foundry. Her views do not represent The Heritage Foundation.)