VATICAN CITY (RNS) The Vatican has effectively addressed the “worldwide scourge” of clerical sexual abuse over the past decade and promoted the reporting of allegations to both church and legal authorities, a United Nations panel heard on Tuesday (May 6). 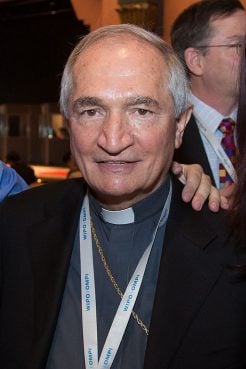 The Vatican’s ambassador to U.N. agencies in Geneva, Archbishop Silvano Tomasi, said the Catholic Church had “crossed the threshold” in its approach to the issue of abuse, saying the church’s internal culture had changed.

Tomasi faced intense questioning from members of the U.N. committee investigating whether the church upholds the U.N. convention against torture beyond the walls of the world’s smallest country, the Vatican City state.

“It is clear that the issue of sex abuse of children, which is a worldwide plague and scourge, has been addressed in the past 10 years by the church in a systematic and constructive way,” Tomasi said.

“Any serious look around the world at what the Holy See is doing and what local churches are doing shows clearly that there is no climate of impunity but a total commitment to clean house. I think we have crossed a threshold in our approach to these problems.”

Grilled by committee member Felice Gaer, an American human rights expert, Tomasi said perpetrators were “sometimes punished” by civil authorities as well as the church itself, doling out what he called a “double punishment.”

Tomasi told the U.N. panel that 848 clerics had been expelled from the church between 2004 and 2013 and that the church had paid $2.5 billion in compensation to victims of clerical abuse in the U.S. alone.

“I don’t know how many of these priests were referred to civil authorities, but I understand many of them received a civil penalty from the court system — in the case of the United States,” he said.

But David Clohessy, national director of the Chicago-based Survivors Network of those Abused by Priests (SNAP), called the number of dismissed priests “meaningless.”

“Parents can’t protect their kids from a number,” he said. “What parents need are the names and whereabouts of child-molesting clerics. This is what the Vatican should disclose.”

Tomasi said when there is a “credible accumulation” of evidence, cases should be reported to civil authorities, despite claims that Italian bishops were recently told they were under no obligation to report suspected cases.

While Tomasi said there was no policy of shifting priests around to avoid prosecution, some priests who were not expelled were removed from contact with children and asked to live in a monastery.

He said it was up to the Vatican’s Congregation for the Doctrine of the Faith or the local bishop to decide whether a priest should be defrocked but stressed that the individual still faced punishment.

Tomasi said in the 1960s and 1970s there was a tendency to offer “psychological” help to clergy accused of abuse. “The culture of the time would allow this to happen. This was a mistake because this allowed for other abuse of minors. The culture has changed.”

In February, the Vatican reacted angrily when another U.N. panel on the rights of the child delivered a scathing report on its approach to the sex abuse scandal and its policies on abortion and birth control.

The pope recently established a committee headed by Boston Cardinal Sean O’Malley to look at the issue of sex abuse; the eight-member committee held its first meeting at the Vatican last week.

Signs of the Times
Six things you need to know about Pope Francis and gay civil unions
News
Vatican and China extend ‘experimental’ agreement on appointment of bishops
Signs of the Times
Dear Pope Francis, six reasons you should wear a mask
News
Study: Biden still leads among Latino Christian voters, but Trump’s support has grown
News
In wake of financial scandals, Vatican releases budget for first time in four years
© Copyright 2020, Religion News Service. All rights reserved. Use of and/or registration on any portion of this site constitutes acceptance of our User Agreement and Privacy Policy, Privacy Statement and Cookie Notice. The material on this site may not be reproduced, distributed, transmitted, cached or otherwise used, except with the prior written permission of Religion News Service.