(RNS) The highest court in Massachusetts upheld the legality of the phrase “under God” in the Pledge of Allegiance on Friday (May 9), dealing a blow to atheist groups who challenged the pledge on anti-discrimination grounds.

The Massachusetts Supreme Judicial Court said the daily, teacher-led recitation of the pledge in state public schools does not violate the state’s equal rights amendment and is not discriminatory against the children of atheists, humanists and other nontheists. 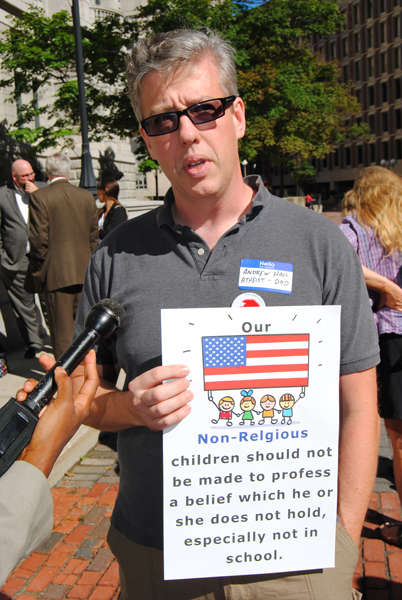 Andrew Hall, an atheist and father, demonstrates on Sept. 4, 2013 outside the Massachusetts Supreme Judicial Court. He says recitation of the Pledge of Allegiance in schools should be deemed unconstitutional in Massachusetts. Photo by G. Jeffrey MacDonald

“Participation is entirely voluntary,” the court wrote as a whole in the decision of Doe v. Acton-Boxborough Regional School District, brought by an anonymous humanist family. “(A)ll students are presented with the same options; and one student’s choice not to participate because of a religiously held belief is, as both a practical and a legal matter, indistinguishable from another’s choice to abstain for a wholly different, more mundane, and constitutionally insignificant reason.”

The ruling marks the second legal loss for atheists this week. On Monday, the U.S. Supreme Court ruled that sectarian prayers given before government meetings were not a violation of the First Amendment’s guarantee of separation of church and state.

Secular activists were quick to condemn the ruling.

“This would have been a groundbreaking case for atheists and humanists, but the Court’s decision today simply reaffirms the status quo,” said Edwina Rogers, executive director of Secular Coalition for America, an umbrella organization of atheist, humanist and other secular groups. “Today’s decision tells our children that love for our country must be linked to a god belief, and that in and of itself is discriminatory.”

The loss is also a setback for a new legal strategy that secular groups employed after a string of challenges to the “under God” phrase. Here, they argued that “under God” violated the state constitution’s guarantee against discrimination rather than the U.S. Constitution’s promise of separation of church and state. 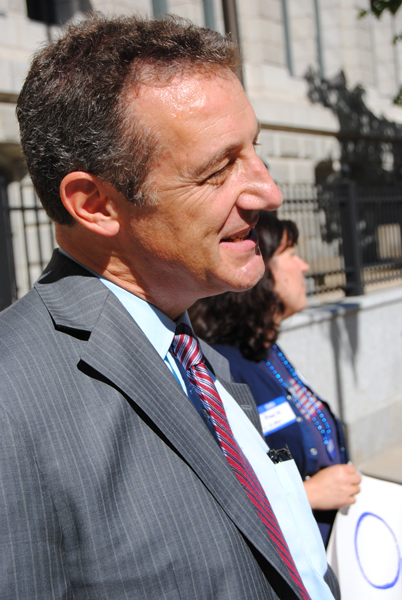 David Niose, president of the American Humanists Association, greets supporters on Sept. 4, 2013 after arguing against the Pledge of Allegiance at the Massachusetts Supreme Judicial Court. Photo by G. Jeffrey MacDonald

Since the addition of the phrase “under God” in 1954, the pledge has faced repeated challenges. In 2004, one case reached the Supreme Court, but ultimately failed, as have all previous challenges.

“We are very disappointed by the court’s ruling,” said the plaintiffs’ attorney David Niose, legal director for the American Humanist Association’s Appignani Humanist Legal Center. “No child should go to public school every day, from kindergarten to grade 12, and be faced with an exercise that portrays his or her religious group as less patriotic.”

The American Humanist Association has a similar case pending in New Jersey. In a statement issued after the ruling, officials there said they would continue to wage discrimination cases under other state constitutions.

Opinion
Patriot games: CRT, Christian nationalism and a battle for the real truth of America