This weekend, the American Humanist Association (AHA) will honor former Congressman Barney Frank of Massachusetts with their 2014 Humanist of the Year award.

Last year, Frank—a trailblazing politician who was the first member of Congress to come out as gay and the first to be in a same-sex marriage while in office—revealed his atheism in an interview with Bill Maher. The atheist and Humanist community has enthusiastically embraced him; earlier this year he was awarded the Lifetime Achievement in Cultural Humanism award by the Humanist Community at Harvard.

In advance of his appearance at the AHA’s 73rd annual conference tonight (Friday), I spoke with Frank about Humanism, LGBTQ (lesbian, gay, bisexual, transgender, and queer) rights, and atheism and politics.

Below, he shares how anti-Semitism impacted his decision not to talk about his nontheism sooner, his advice for atheists who want to run for public office, what he considers the most pressing issues for nontheists and LGBTQ people today, and how responses to his nontheism have differed from responses to his sexual orientation.

CS: What does Humanism mean to you?

BF: A Humanist is nontheistic in his or her value set, and focused on humanity and human beings as the source of values. I never identified specifically as a Humanist, but that’s essentially what I am. It reflects my viewpoint.

CS: How does it feel to be embraced by the Humanist community?

BF: It’s very nice. I think it’s a sign of the times; there’s still enough prejudice against nontheists that my simply saying something that seems fairly commonplace to me means a lot to people. I’ve long been aware of prejudice against gay and lesbian people, and I have been very sensitive to that. I guess I never thought about the extent to which people who want to be explicit about their nontheism and their Humanism have felt somewhat devalued—so I’m glad to be of service.

CS: You became the first openly gay member of Congress in 1987, but you didn’t reveal your nontheism until after you left office. Why?

BF: It was never relevant. I never professed any theology. And it’s complicated by my Jewishness. Obviously, being Jewish is both an ethnicity and a religion. I was concerned that if I were to explicitly disavow any religiosity, it could get distorted into an effort to distance myself from being Jewish—and I thought that was wrong, given that there is anti-Jewish prejudice.

For years I would go to temple, but I suddenly realized it doesn’t mean anything to me. So I decided, I’m not going to do this. I’m not going to pretend. During my service I never pretended to be a theist. It just never became relevant that I wasn’t, and I guess I was not as conscious of the discrimination nontheists felt. But I’ve always been opposed to any imposition of religion. I fought hard, for example, with other members of Congress to oppose any notion that a religious group getting federal funds could discriminate in hiring.

When I took the oath of office, I never swore and said, “So help me God.” But members of the House take the oath en masse, so nobody noticed. I’ve said that if I’d been appointed to the Senate, as I wanted my governor to do but he decided he had other plans, I would’ve had my husband hold the Constitution.

The subject just never came up. The only religious services I’ve attended for the last 20 years were funerals; I’ve attended more masses than a lot of my Catholic friends.

CS: A recent survey found that only 53% of Americans say they would vote for an otherwise qualified nontheistic candidate. There are currently no open atheists in Congress. Why do you think that is? 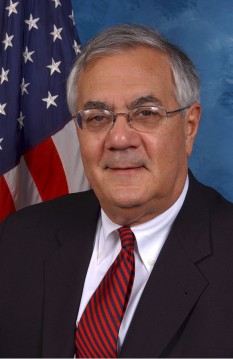 BF: First of all, I wouldn’t say atheist. It seems to me that atheist is a more specific term. I just have no interest in [theology]. I’m not interested in guesses.

I think American history and tradition show [why there aren’t open nontheists in Congress]. There was this fervent Protestantism when we started, but there was also Robert Ingersoll. I don’t know exactly why; I’ve never really studied it.

I wasn’t thinking about that [when I announced my nontheism]. I just thought, I don’t really believe this stuff, I’m not going to pretend that I do. But I have consistently defended the rights of nonbelievers throughout my career. I’ve just never thought about why America has more of an issue [with nontheists in politics] than other countries, assuming that we do.

CS: What advice would you give to nontheists who are seeking to be more politically involved? For example, there’s a young man named James Woods, who is an open atheist running for Congress in Arizona. What would you say to him?

BF: Don’t appear to be aggressive—that’s the problem about atheism, and why I think nontheism is a better word. Honor other peoples’ convictions, as we seek to have ours honored. Don’t ridicule, don’t attack. Religion does a great deal of good, but when we have conflicts, religious leaders often make it worse rather than better. But I’ve always acknowledged the good work that is done by religions.

So the answer is: Don’t give the appearance that your campaign is a crusade for nontheism. Address it honestly when it comes up, and avoid any negativism about religion in general. That doesn’t mean you can’t criticize particular abuses that are carried on in the name of religion, but I would say this: You deal with it when it comes up, you’re matter of fact about it, and you go on about other issues.

CS: What do you consider the most pressing issues facing LGBTQ people and nontheists today?

BF: Well, they’re different. Increasingly, the most pressing issue facing LGBT people in most of this country is job discrimination: The fact that you can be fired, not hired, or denied a promotion in a majority of states because of your sexual orientation or gender identity. Marriage equality was the issue, but that is rapidly changing—judges are declaring in favor of marriage, but judges cannot declare in favor of employment non-discrimination. Judges can say that the state government can’t discriminate; they can’t argue that it’s a constitutional violation for private people to discriminate. So I think employment is the biggest issue.

For nontheists: Only a very tiny number of people are going to run for office, so that’s not the biggest. I think it is the critical response atheists get; that people think ill of them. And there are also denials of employment opportunities for nontheists as well. There are organizations that require you to profess religious belief. Part of what I did in Congress was to say, Ok, well you can’t get federal money.

CS: What do you make of the parallels or equations that some nontheists make between being gay and being atheist, such as “coming out,” “being in the closet,” or saying that the atheist movement should look to and learn from the LGBTQ movement?

BF: There are similarities and there are differences with all groups. There are areas in which the movement for LGBT legal equality resembles the women’s movement and the movement to end racial prejudice, and also areas where they are different. I think [such comparisons] can be a way of using common terms to help you make your point. A lot of these issues are very different, but it does help make the central point that we’re being treated unfairly because of something that shouldn’t be anybody else’s concern. That commonality is relevant.

CS: Do you feel your experiences as a gay person and as a nontheist have any parallels, or do they feel different?

BF: I’ve never felt any discrimination because I was not a believer in any religious doctrine. The constraining factor was, as I said, my fear that [my nontheism] would be interpreted by some as a repudiation of Jewishness. But no, I can’t say I’ve experienced [discrimination for being a nontheist]. The prejudice and criticism for my sexual orientation was much more pronounced. I’m not aware of any on the religious side.

CS: You’re the subject of a new documentary. Can you say a little bit about what else you’re working on now?

BF: I just finished the first draft of a book and I’ve been talking to my editor. I was pleased that they don’t want a whole lot of rewrites. I am a contributor to CNBC and MSNBC, and in September I will start teaching at Harvard: In the fall, a course on LGBT history, and in the spring, a course on Congress.

Portions of this interview were minimally edited for length or clarity.