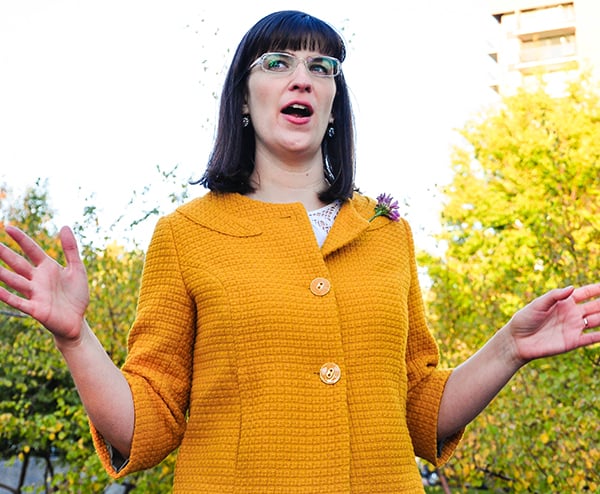 Kate Kelly, founder of the Ordain Women movement, is facing possible excommunication for her views on gender inequality in the Mormon Church.
June 23, 2014
Sarah Pulliam Bailey

SALT LAKE CITY (RNS) A panel of Mormon judges has moved to excommunicate on charges of apostasy the founder of a group advocating for women clergy, according to a statement from the group, Ordain Women.

Kate Kelly, an international human rights lawyer, helped organize Ordain Women, which champions an end to the all-male lay priesthood in the Church of Jesus Christ of Latter-day Saints. The group announced the results of the disciplinary hearing on Monday (June 23).

"The decision to force me outside my congregation and community is exceptionally painful," Kelly said in response to the decision. "Today is a tragic day for my family and me as we process the many ways this will impact us, both in this life and in the eternities."

Kelly's former leader in Virginia, Bishop Mark Harrison, sent Kelly an email to inform her that the panel of judges who tried her on Sunday (June 22) excommunicated her "for conduct contrary to the laws and order of the LDS Church."

"In order to be considered for readmission to the Church, you will need to demonstrate over a period of time that you have stopped teachings and actions that undermine the Church, its leaders, and the doctrine of the priesthood," Harrison said in the email. "You must be truthful in your communications with others regarding matters that involve your priesthood leaders, including the administration of Church discipline, and you must stop trying to gain a following for yourself or your cause and taking actions that could lead others away from the Church."

The group sent a portion of the email in a statement to reporters.

"The Church's response to this situation is in the letter that was sent to Sister Kelly, which explained the decision and the reason for it," according to a statement from the LDS church. "Since Ordain Women has chosen to publish only selected excerpts with their interpretation, we suggest that Sister Kelly make the full letter available in the interests of transparency."

On Sunday (June 22) in Salt Lake City, Kelly attended a vigil of about 200 supporters, instead of attending the disciplinary hearing in Virginia.

Women hold many leadership positions in the LDS church, but the offices of bishop and stake president are reserved for men. Stakes oversee congregations known as wards. The church's highest leaders, called the Quorum of the Twelve Apostles, are men.

Kelly's group was criticized by church leaders in April when they marched on church property in Salt Lake City's Temple Square, asking to be permitted in a meeting reserved for members of the priesthood. Church leaders had warned the group in advance that they would not be allowed into the meeting and asked them not to disturb the conference.

Kelly has been one of two high-profile Mormons considered for excommunication. John Dehlin, creator of a website that provides a forum for Mormons questioning their faith, is scheduled to meet with his stake president on June 29.