CANTERBURY, England (RNS) While Christians waited to learn whether the Church of England would approve the consecration of women bishops, the church’s governing body — the General Synod — quietly voted to drop all future references to the devil in a new baptism service. 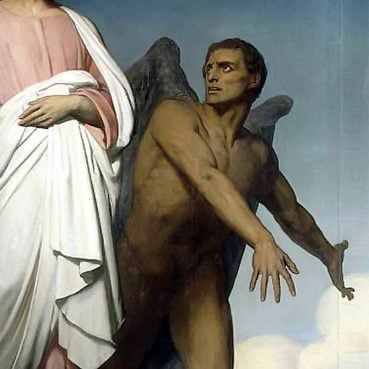 The devil is portrayed in “The Temptation of Christ,” an 1854 painting by Ary Scheffer. The Church of England on July 14, 2014, approved alternative language in its baptism rite that removed a reference to the devil, who “has been turned into a cartoonlike character of no particular malevolence,” said Robert Paterson, the Bishop of Sodor and Man.

The simplified wording was written after priests said the traditional service was unnecessarily complex and might confuse people who are not regular churchgoers.

In the traditional service, godparents are asked whether they are ready to renounce the devil and all his works for the sake of the child being baptized.

The new wording, approved Sunday (July 13), only asks whether parents and godparents will “turn away from sin” and “reject evil.”

Speaking after the new wording was overwhelmingly approved, Bishop Robert Paterson denied that the baptism service had been watered down.

“We all know that for many people, the devil has been turned into a cartoonlike character of no particular malevolence,” he said.

But the move is almost certain to infuriate traditionalists.

Speaking on a BBC radio program Tuesday, Peter Stanford, author of “The Devil: A Biography,” wondered what would happen to the dozens of trained exorcists attached to each diocese in England. In 1974, the Church of England set up a “Delivery Ministry” in which exorcists are trained by theologians and registered psychiatrists.

“If we’re never going to mention the devil anymore, what exactly is it that these people going to do?” he asked.

Referring to the devil in the New Testament, Stanford asked: “Are we saying that the devil is just a symbol and isn’t real and if so, where does that leave God? I think we’re in a bit of a muddle here.”

On Monday, the General Synod voted 351-72 to allow women to be ordained as bishops.