Wyndham Lewis painted “A Battery Shelled” in 1919. He served in the war as a lieutenant with the British artillery and became the official artist of the war in 1917 for both the British and Canadian governments. “The soldiers we see in there have lost their human form and seem more like robots or machines, metaphor of the human degradation that Lewis witnessed in the battlefield,” according to the art blog “Silver and Exact.”

(RNS) Half a world away from Europe, where World War I erupted 100 years ago next week (July 28), Washington National Cathedral will mark the occasion with a liturgy created especially for the anniversary.

But the service is about more than remembrance. It is about atonement — atonement for the 16 million killed in the conflict and the more than 20 million wounded, many of them horribly disfigured in trench warfare that kept much of the four-year conflict at a stalemate.

“I was struggling with praying for the beginning of a war,” said the Rev. Gina Campbell, the cathedral’s canon precentor and the author of the World War I liturgy. “I was trying to put my mind around how one prays for the beginning of a war. I thought it would need to be profoundly penitential, that the way one would approach the disaster that is World War I would have to be in deep penitence.”

The result is an entire service — music, litany and prayers — that acknowledge the horrors of war and the distance war takes people of faith from God. The service will be said this Sunday (July 27) at the Washington, D.C cathedral. 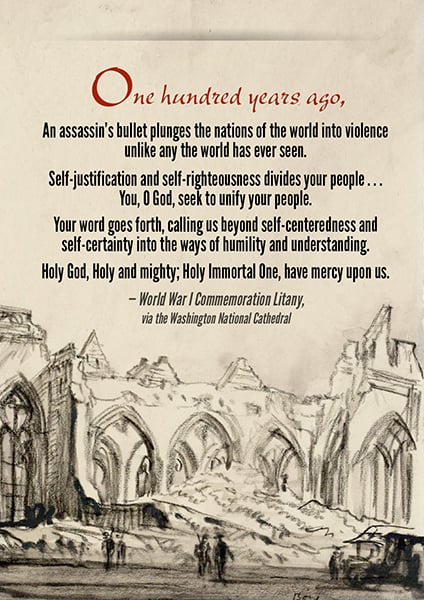 The Washington National Cathedral developed a special litany commemorating the centenary of World War I. An excerpt is shown here overlaid on Muirhead Bone’s 1917 “Ruins of the Church at Péronne” charcoal drawing. “The town of Péronne is close to the Somme, which witnessed some of the fiercest fighting and worst carnage of the whole conflict,” according to the National Library of Scotland. “It is said that there was not one house or building left in Péronne that remained untouched by shellfire, and that everything had to [be] rebuilt once the Armistice was signed in November 1918.”

“One hundred years ago, an assassin’s bullet plunges the nations of the world into violence unlike any the world has ever seen,” the service’s litany of prayer begins, before citing the number of dead and wounded, including civilians.

“From the fields of Flanders to the forests of Verdun to the peninsula of Gallipoli, the dead cry out: life and love interrupted; hope and promise laid waste; war, war, and more war. Forgive us!”

Campbell crafted the liturgy at the request of Congress’s World War I Centennial Commission, which is organizing memorial events around the country for the next four years. She was part of a committee that included Episcopal Bishop Jay Magness (who oversees military chaplains), retired Navy chaplain Wollum Jensen, the cathedral’s music director and others.

They and the cathedral have made the liturgy available for other houses of worship to use or adapt and posted them online. Campbell worked to make the service interfaith, relying heavily on the Old Testament for readings and leaving out the name of Jesus in most of the prayers.

“I wanted to reach as many kinds of worshipping communities as possible because in World War I there were huge numbers of Muslims fighting, huge numbers of Jews,” she said. “This was not a Christian war, and the prayers should reflect that.”

She also tried to make sure the service did more than mark a great conflict that realigned the global map.

“I thought, ‘This can’t just be a commemoration, this has to speak to a contemporary situation as well,” she said. “Church is not just about remembering, it is about remembering forward. We have to bring it into the present and into God’s hope for our future.”

Houses of worship in other countries will mark the war’s outbreak with special services, too. The Conference of European Churches and the Community of Protestant Churches in Europe have created resources for their congregations.

The Church of England, which will mark the anniversary of Great Britain’s entry into the war on Aug. 4, 1914, has also crafted a special liturgy that resonates with images and sounds of the war.

“For all the boots of the tramping warriors  and all the garments rolled in blood  shall be burned as fuel for the fire,” the service’s Old Testament Canticle begins. “For a child has been born for us, a son given to us,  and the government will be on his shoulders.”

Bishop Stephen Platten, the creator of the Church of England’s World War I resources, said the church has a special role to play in commemorating the war.

“In the First World War it was the Church of England (that was) the holder, if you like, of the national conscience at that point,” Platten said in an interview with the BBC. “In the Falklands conflict it was true, it was true in the Gulf War and it continues to be true in Afghanistan.”