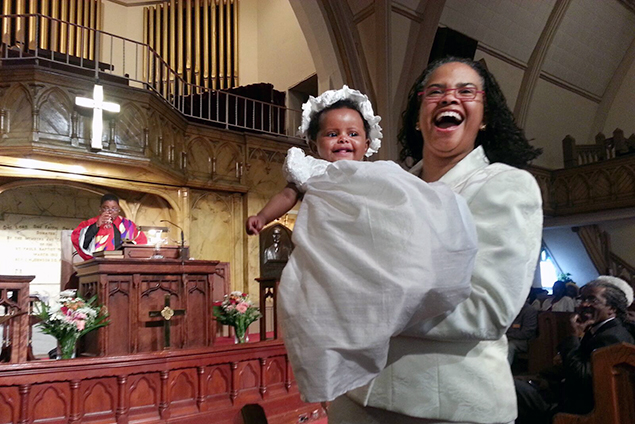 (RNS) When Philadelphia’s St. Paul Baptist Church hired the Rev. Leslie Callahan as its first female pastor, in 2009, she was nearing her 40th birthday and the tick-tock of her biological clock was getting hard to ignore.

She delighted in her ministry but also wanted a husband and children in her life. The husband she couldn’t do much about — he just hadn’t stepped into her life. 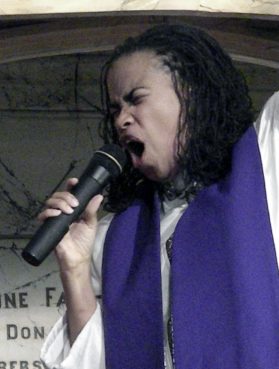 The Rev. Leslie Callahan worships during the 2012 Palm Sunday at St. Paul’s Baptist Church in Philadelphia.

“But it was clear to me that I was going to do everything in my power to realize my dream of becoming a parent,” she said.

Now Callahan is mother to 22–month-old Bella, who was welcomed joyously by what the pastor describes as “a pretty traditional Baptist church.” She describes Bella’s arrival as “a divine regrouping,” a different answer to her prayers than the traditional mommy-daddy-baby model she had envisioned.

Ever since unmarried sitcom anchorwoman Murphy Brown shocked much of the country in 1991 by deciding to raise her baby on her own, the culture has changed. Once unthinkable and later unacceptable, single mothers by choice today are met with less judgment.

In fact, according to federal statistics, more than 40 percent of births are to unmarried mothers. But what if, like Callahan, the single mom by choice is a minister, or a rabbi?

The phenomenon is impossible in traditions where serving as clergy is off-limits to women, including the Roman Catholic Church and most Southern Baptist churches. These prohibitions have drawn upon traditional views of women as mothers, and married ones at that. 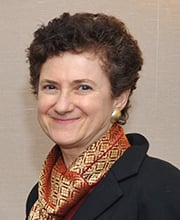 Ann D. Braude is a senior lecturer on American religious history and director of the Women’s Studies in Religion Program at Harvard Divinity School.

“There’s nothing that points up the traditional conflicts that religious groups have put forward between ordination and womanhood than motherhood,” said Ann D. Braude, director of the Women’s Studies in Religion Program at Harvard Divinity School.

But even in houses of worship that have accepted women in the pulpit, an unwed mother can still unsettle the pews. “Traditionally, motherhood by Christians and others was viewed as a vocation, and you can only have one vocation: You could have the ministry or motherhood as a vocation, but not both,” Braude said.

While their numbers are few — and no one is keeping count — some female clergy are concluding that their congregations can handle their choice. “These women are putting forward the possibility that not only can you have a vocation to ministry and a vocation to motherhood, but that marriage is not necessarily a part of that,” Braude said.

But the path from pastor to single mom still seems to matter. For Callahan, she chose adoption.

“I definitely feel that God brought Bella and me into each other’s lives,” she said.

Did she ever consider assisted reproduction or donor sperm? St. Paul’s had already taken a big step by giving the pulpit to a single woman. To ask the congregation to accept a pregnant single woman — “I didn’t think it would be a fair thing to do,” Callahan said.

For many congregants, a pregnant single mother leading the congregation would cross a line that an adoptive mother would not, Braude said. “Religion conveys ideas through symbols, and the presence of a pregnant woman at the pulpit is a very challenging set of symbols for some religious people to bring together,” she said.

Her vision for her life was the Jewish version of Callahan’s: rabbi mom plus dad plus children. But in her 30s, with no prospective husband on the horizon, Sol made a plan for a family. She knew it could work at her congregation, B’nai Jeshurun, the progressive New York City synagogue where she has worked for the past 18 years.

“I don’t know that I spent a lot of time worrying about other people’s opinions,” said Sol, whose story was included in a recently released documentary about Jewish clergy who opted for single motherhood: “All of the Above: Single, Clergy, Mother.”

She — like the other women interviewed for this story — knew she had the financial means to support a family on her own.

But Sol, now 43, still worried. She still wanted a husband. Would having children on her own make people think she was not interested in men? And while most parents struggle to balance work and children, the feat is harder still for public figures whose work is to nurture a congregation.

“That’s what I had the most anxiety about,” Sol said. “As a rabbi, I have pressing responsibilities for a community. I don’t have a 9-to-5 schedule. I don’t have weekends off. Would it be possible for me to do this without having to hire so many people that I would never see my children?”

Sol did figure it out, and gives great credit to her parents, who help care for their grandchildren on Shabbat, the Jewish Sabbath. Colleagues at the Conservative synagogue understand that she isn’t always as readily available as she was before her children were born. And importantly, she said, she herself — no longer a rookie rabbi — more easily sets limits at work.

But just because a potential minister mom lives in anything-goes New York City doesn’t mean her congregation is going to be thrilled with her pregnancy. 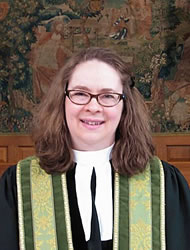 The Rev. Beverly A. Bartlett is associate pastor for congregational life at Madison Avenue Presbyterian Church.

The Rev. Beverly Bartlett, associate pastor of Manhattan’s Madison Avenue Presbyterian Church, had made a motherhood pact with herself when she was in her 20s. If she were still single in her mid-30s, she would try to have children on her own.

In her 40s, she learned that her chances to have a successful pregnancy were not good but that a toddler in Nepal needed a home. Emily, now 10, is the minister’s daughter. “The church,” said Bartlett, “is her extended family.”

And what if Bartlett became pregnant, instead of adopting?

“The church probably could have handled it, but not without some discussion, and there probably would have been some people who would not have looked upon it favorably,” she said.

Bartlett has spoken with only one other woman in the clergy who has embarked on single parenthood without a partner. She has heard of a second.

Carolyn L. Gordon is an associate professor of communication at Fuller Theological Seminary.

The Rev. Carolyn Gordon, who chairs the Department of Preaching and Communication at Fuller Theological Seminary, said women preachers are still new in many congregations, and their presence is bound to bring change. The first wave of ordained women may not have considered unmarried motherhood an option, she said.

“But I would not be surprised to see more as time goes on,” she said. “The women groomed for ministry are different now.”