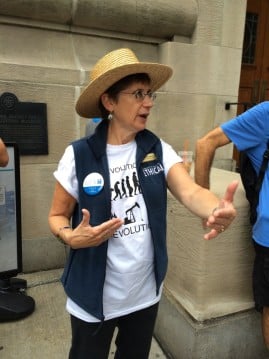 Less than two weeks ago, more than 300 Humanists marched in the People’s Climate March. But some may not know that the American Ethical Union (AEU) was one of the principal organizers of the march’s coordinated Humanist participation—or even know what the AEU is.

In my experience, unfamiliarity with Ethical Culture—a nontheistic, Humanist religion—is more common among some atheists than it should be. As nonreligious communities like Sunday Assembly (frequently referred to as “atheist church”) expand, I’d like to see more people acknowledge and learn from the rich history of Ethical Culture.

Chris Stedman: Can you tell me about the origins of Ethical Culture?

Anne Klaeysen: I like to tell the story of a young man, born in Germany and raised in NYC in a Reform Judaism household, who was sent back to Germany to study theology, become a rabbi, and take over his father’s pulpit. However, Felix Adler returned home a philosopher. The board of trustees at his father’s synagogue agreed that his first—and last—sermon there was brilliant, but he was not offered a position; his religious ideas had become too radical.

[tweetable]On May 15, 1876, 25-year-old Felix gave a speech that became the founding address of Ethical Culture. I wish that more people would read it.[/tweetable] He writes that his “dearest object” is “to exalt the present moment above the strife of contending sects and parties, and at once to occupy that common ground where we may all meet, believers and unbelievers, for purposes in themselves lofty and unquestioned by any.” [tweetable]Human morality was placed at the center of this new venture; ethics is the common ground “where we may all grasp hands as brothers, united in mankind’s common cause.”[/tweetable]

That first generation answered Adler’s call for action by founding educational and social justice institutions that addressed the needs of children, new immigrants and minorities, the sick and the poor, and the incarcerated.

CS: What are some of the challenges facing Ethical Culture right now? What is its future?

AK: Our movement is small, with fewer than 10,000 members—although many more people attend our programs and use of our ceremonial services. The challenges are a mix of geography, demographics, public relations, and the word “religion.” The current demographic in several societies, like that in more traditional faiths, is aging and white. Efforts to reach out to younger and more diverse populations through social media and changing the format of Sunday gatherings from lectures to participatory experiences have been partially successful. [tweetable]To a younger generation that is “spiritual but not religious,” explaining how Humanism can be religious has been challenging.[/tweetable]

I see our future, once again, as holding the common ground of ethics. [tweetable]Humanists hold different beliefs and enjoy squabbling over them.[/tweetable] At the center, however, is an ethical commitment to making the world a better place by assuming responsibility for our actions, securing universal human rights, and protecting the environment.

CS: How do Ethical Culture and Humanism overlap and diverge?

AK: The terms Ethical Culture and Ethical Humanist are synonymous. In the 1960s, Ethical Culture Leaders formally acknowledged that philosophically Ethical Culture was part of the Humanist movement. We differ from secular Humanism in terms of our organization—congregational—and status as a religion. [tweetable]My favorite definition of religion is paraphrased from theologian Paul Tillich: It is one’s ultimate concern. Ours is ethics.[/tweetable]

CS: How do you see Ethical Culture speaking to and serving an increasingly nonreligious generation? 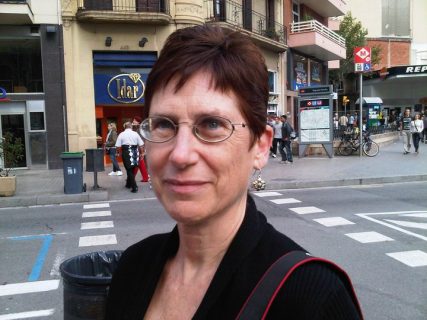 AK: Religious language has changed over the decades. When the first Humanist Manifesto was published in 1933, the majority of signers understood Humanism as a this-worldly religious expression. Today the word “religion” is used by the majority of people in the U.S. to mean the worship of a supreme and supernatural deity. Those who identify as “spiritual but not religious,” according to Pew, distrust religious institutions because they fail to walk the talk of their proclaimed values.

Ethical Culture has always been nontheistic—another misunderstood term. We espouse no belief in the supernatural or life beyond death; our emphasis is on ethical behavior. [tweetable]We ask, “How does one’s belief or unbelief inform one’s behavior?” That question is important for everyone to contemplate and answer.[/tweetable]

CS: What do you think emerging forms of community for nontheists, such as Sunday Assembly or Humanist communities and chaplaincies, can learn from Ethical Culture? What can the atheist movement learn?

AK: [tweetable]We can learn from one another and need not compete for members.[/tweetable] Humanist communities have existed within the Unitarian Universalist Association since the early twentieth century, and Harvard’s Humanist Chaplaincy was founded decades ago. I belong to the AHA and recently accepted an invitation to serve on the board of Sunday Assembly-NYC. These are different and meaningful expressions of Humanism.

The atheist movement might learn to develop better relationships and practice nonviolent communication. [tweetable]In my experience, their identity is too tightly, and often solely, defined by their unbelief.[/tweetable] We human beings are complex creatures, evolved from this natural earth with consciousness and imagination to reflect upon our existence and know our own deaths. What a miracle!