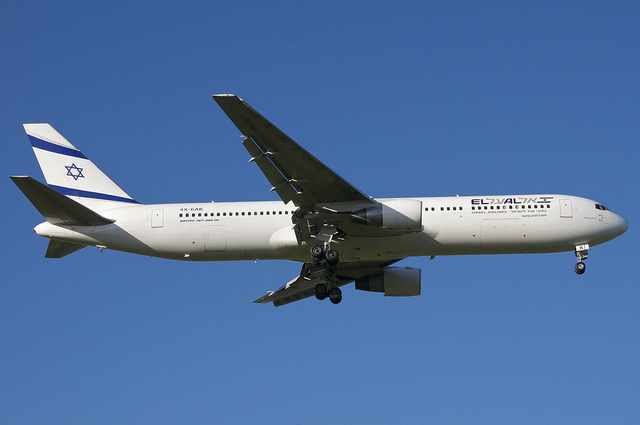 JERUSALEM (RNS) A Chicago woman has launched an online petition asking El Al Airlines to allot a section of its planes to ultra-Orthodox Jewish men who do not want to sit next to women.

Incidents like these have been going on for years, according to women’s rights advocates.

Gender segregation is a core precept in ultra-Orthodox society, which believes that contact between unrelated men and women is strictly forbidden by Jewish law.

In Israel, attempts by some ultra-Orthodox men to impose gender segregation in public spaces such as offices, public buses and even streets in certain neighborhoods have prompted legal action by groups opposed to what they view as religious coercion.

In her Change.org petition, which had more than 2,300 signatures on Wednesday (Oct. 1), Shapiro asks El Al why its staff permits female passengers “to be bullied, harassed, and intimidated into switching seats for which they rightfully paid.”

One person’s religious rights do not trump another person’s civil right, the petition states.

Widely discussed in Jewish communities around the world via social media, the petition calls on El Al to reserve a few rows of separate-sex seating on every flight “where for a fee, those passengers who need such seating can pre-book their seats and not annoy or bully other passengers to change seats with them — thereby preventing delayed takeoffs.”

Unlike efforts by some ultra-Orthodox in Israel to force segregated seating on buses, this effort would allow ultra-Orthodox men the option of sitting separately, if they desire.

An El Al spokesman could not be reached for comment, but the airline issued a statement after the most recent seat-related flight delays, saying “if it is found that there are possibilities for improvement in the future, those suggestions will be taken into consideration.”

Shapiro told Religion News Service that she posted the petition “in the hopes that a few El Al customers would sign and the airline would consider the recommendation, thus eliminating the type of chaos that ensued aboard their New York to Tel Aviv flight last week. I never dreamed the petition would receive the attention it has, but obviously it hit a nerve.”

News
El Al vows to end practice of moving women to accommodate ultra-Orthodox
News
Christians raise hell about Sweet Jesus ice cream over controversial cross branding
Columns
El Al is a Jewish airline
Beliefs
Israeli-American woman sues El Al after she was asked to change seats
Beliefs
Controversy grows over Whole Foods CEO’s relationship with disgraced rabbi
© Copyright 2020, Religion News Service. All rights reserved. Use of and/or registration on any portion of this site constitutes acceptance of our User Agreement and Privacy Policy, Privacy Statement and Cookie Notice. The material on this site may not be reproduced, distributed, transmitted, cached or otherwise used, except with the prior written permission of Religion News Service.