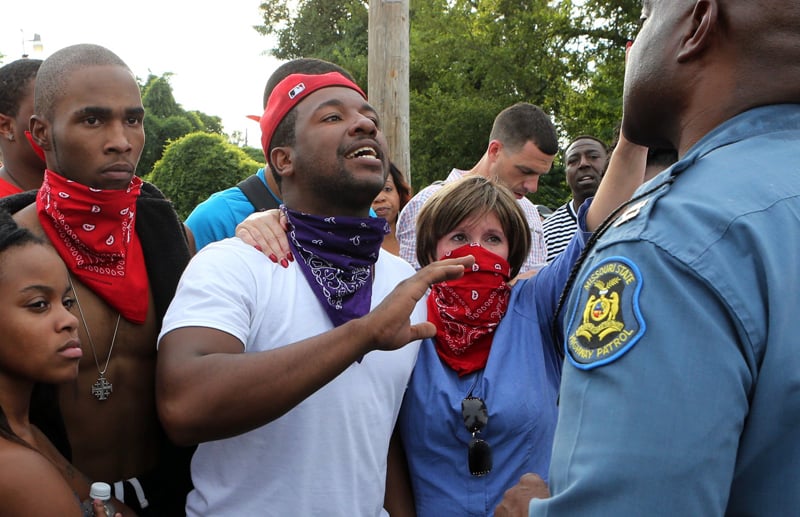 ST. CHARLES, Mo. (RNS) The first time the public heard the name Renita Lamkin was probably the day she was shot.

In early August, four days after Michael Brown was killed by Officer Darren Wilson, Lamkin, a pastor, she stood with Ferguson protesters, attempting to mediate. Police had warned the crowd to disperse and in an effort to buy a little time, Lamkin shouted, “They’re leaving!”

“That’s when I felt a pop in the stomach,” Lamkin said of the rubber pellet that hit her. The pellet left a ghastly wound — large, deep and purplish — and created a social media frenzy.

Tweet after tweet showed Lamkin, 44 and white, wearing a T-shirt with an image of a cross that she lifted up just slightly to show off the ugly bruise.

Lamkin said she didn’t really have a plan when she ventured out to Ferguson but that “the whole being shot thing was probably the best thing that could have happened.” The injury had cemented Lamkin’s role in the struggle for racial equality.

“They say, ‘You took a bullet for us.’ My sense is …We’re in this together, and I was playing my role,” Lamkin said.

Fast forward nearly three months and Lamkin continues to deliver the same message of defiance as pastor of an African Methodist Episcopal Church in St. Charles.

The AME denomination was born out of the resistance to slavery with approximately 2.5 million members, most of them African-American.

“We can and should be defiant,” Lamkin told her congregation on a recent Sunday at St. John AME Church. “There will always be those who discount the voice of the poor.” But “we don’t have to accept the conditions of this world.”

Although Lamkin is mother to two African-American children, her role as a white leader in the African Methodist Episcopal Church is unusual. 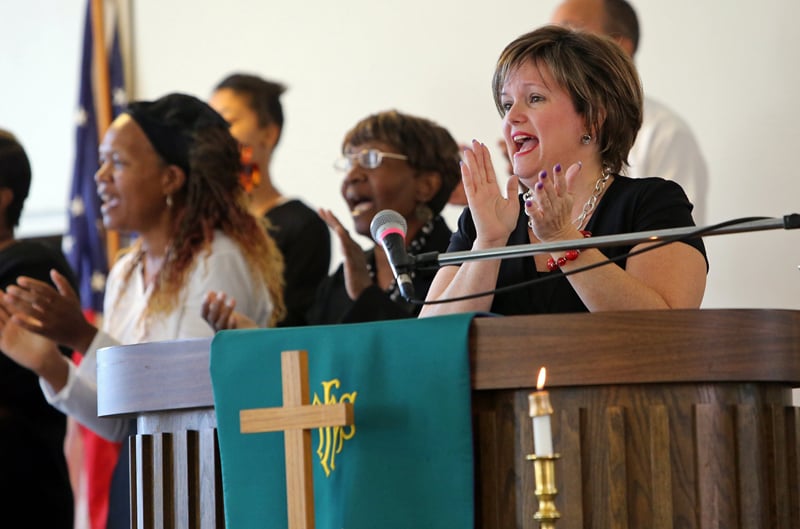 “She’s a rare breed of person to be both white and female in an overwhelming black denomination where the ministry is overwhelming male,” said Michael Joseph Brown, academic dean at Payne Theological Seminary in Wilberforce, Ohio.

Brown said Lamkin, who graduated from Payne in 2014, was the only Caucasian in her graduating class.

Dennis C. Dickerson, a history professor at Vanderbilt University who taught Lamkin, says the “social protest and social insurgency” ethos that’s “baked into the church’s DNA” clearly appealed to her.

While the church’s philosophy informs her work in Ferguson, Lamkin acknowledged that the experiences her children had growing up in St. Louis also influenced her decision to be actively engaged in the protests.

“My kids would be suspended for things that other kids would just have a detention for,” Lamkin said when describing the treatment of African-Americans in schools. “It’s painting all these kids as if they’re these gangsters who are out killing everybody.”

Lamkin said she’s outraged by what she sees as unnecessary police brutality, even in cases where the victim may have been guilty of certain crimes.

Lamkin was 4 when her mother died in a car wreck. She and her three siblings were reared by their grandmother.

From an early age she read the Bible three or four times a year and could rattle off scripture on command.

“First person I led to Christ, I was like 8 or 10 or something,” said Lamkin, who grew up in the Pentecostal church in Kansas City. “I was out knocking on doors after church asking people if they knew Jesus Christ.”

As a child, Lamkin says, she even ran a Bible school in the yard.

But Lamkin’s involvement with religion was not always so playful. She said a youth pastor, as well as a cousin sexually abused her.

She was also severely mistreated by the father of her children. The two met in high school and were together for seven years. Lamkin said she knew she had to leave him on the day that he threatened her with a gun and accidentally shot himself instead.

When she had enough money to put down a payment for a rental property, she and an old high school girlfriend loaded up a Pontiac Trans Am with everything they could and left.

Lamkin expected to be a missionary or a pastor’s wife. Yet because of her knowledge of Scripture, she was repeatedly invited to preach. She said her fate was sealed when in Bible study she met a woman pastor in the AME church.

“I talk too much, you know, I get on people’s nerves, I’m abrasive — sometimes it takes a little bit to warm up to,” Lamkin said. But “people trust me with their stories and trust me to speak from God’s heart to theirs, and I don’t take that trust lightly.”

Ferguson has complicated Lamkin’s life as a pastor. When asked if she’s fearful of what might happen when the grand jury’s decision on indicting Wilson is released, Lamkin says police comportment remains her primary concern.

“Even if it didn’t go anywhere, the arrest itself would say that we are making a shift and that there is accountability. It would be a start,” Lamkin said. “The way things are now, police are protected, and they can act on their opinion and be protected.”

They can’t shoot first,” Lamkin said, “and figure it out later.” 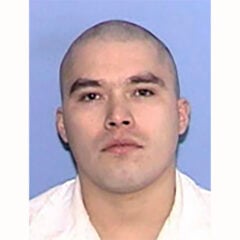