Jason Heap, who is applying to be the first Humanist chaplain in the military. For use with RNS-HUMNIST-CHAPLAIN, transmitted on July 18, 2013, Photo courtesy Jason Heap.

Discussions about atheists in the military have grown considerably in recent years—particularly around the ongoing effort to allow for Humanist chaplains to serve them.

With Veterans Day just around the corner, two of the leading experts on Humanist chaplaincy in the military—Dr. Jason Heap, National Coordinator for the United Coalition of Reason and first Humanist chaplain applicant for the U.S. Navy, and Jason Torpy, former U.S. Army Captain and President of the Military Association of Atheists and Freethinkers—will sit down for a public discussion tonight (Nov. 6), hosted by the Yale Humanist Community.

In advance of the event, I spoke with both Torpy and Heap about the challenges facing nontheists in the U.S. military and how things are changing. Click here for my conversation with Torpy, and read on for my discussion with Heap.

Chris Stedman: What do you think of the back-and-forth nature of recent advancements for nontheists in the military?

Jason Heap: [tweetable]It feels as if there is no consistency in the decisions being made—and as such, it rings alarm bells in my mind.[/tweetable] From an organizational, management, and leadership point of view, it just strikes me as much more important to find ways to unite your people, rather than divide them on things, if you want to achieve your intended outcome. [tweetable]To say “all are respected and included”—but your actions demonstrate otherwise—sends a very confusing message.[/tweetable]

JH: [tweetable]A Humanist chaplain understands the general epistemology, assumptions, and foundations that nontheistic servicewomen and servicemen bring, and can address these more authentically and more effectively than someone who is not a Humanist.[/tweetable] Because of my experiences in life, I cannot fully understand and identify with the specific needs and perspectives of some communities. This does not mean that I cannot be a source of love, comfort, and support; rather, it means that I admit my limits. As a professional and pastoral caregiver, I will help recruit whomever I can to provide whatever it is that I cannot.

I would hope that non-Humanist chaplains have the same professional integrity and courtesy when working with nontheists—and, for the greater wellbeing of nontheists, recognize their boundaries and refer when appropriate. [tweetable]This is not to say that theistic chaplains cannot provide support and care, but they do have limitations when it comes to saying, “I know how you feel.”[/tweetable]

CS: So how can theistic chaplains help atheists in crisis?

JH: I want to be clear: [tweetable]Not all current chaplains have issues with Humanists and other nontheistic personnel, and these professional caregivers have my fullest respect and gratitude.[/tweetable] But if I’m a sailor or soldier and need to sort out some things and I have made the choice to seek the assistance of a chaplain, that relationship is vital to my holistic wellbeing. The chaplain should be professional enough to suspend their own bias and see me as a person who is in need of help—and who will work with me to help me find what I need on my terms. [tweetable]They should support me in the conclusion and outcome, even if the chaplain’s own bias or opinion is otherwise.[/tweetable] 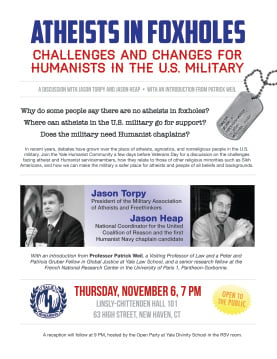 CS: What role do you see Humanist chaplains playing for servicemembers of other faiths?

JH: The point of having Humanist chaplains is to, first of all, serve the nontheistic community in the most authentic way possible—in our understanding and expression of life, our values, our rich heritage, and to help people in positions of command to better understand and accommodate our specific needs.

Humanist chaplains also recognise and fully promote diversity of lifestance and belief, so we are openly prepared and equipped to minister to all members of the services—meeting people where they are and accepting them for who they are, with no reservation.[tweetable]From a pastoral caregiver perspective, Humanist chaplains can serve everybody equally because we approach each person with the assumption that they are important and deserve equal respect and service.[/tweetable]

CS: Do you identify with the challenges facing other religious minorities in the military, such as Sikh Americans?

JH: I have been in contact with people from many religious traditions—some of whom have not yet been listed on the Department of Defense’s roster. [tweetable]Until the military begins to diversify its chaplaincy and leadership, I want to be an advocate for them.[/tweetable] If I were serving as a chaplain, I would be honored to provide for them until someone could truly perform for them in a way that would be the most meaningful to their communities.

CS: Do you think the military ethos plays into certain narratives about religious and national identity?

JH: The military is a microcosm of the American macrocosm. At one point in time, the American military was only white men—whereas now, it is much more diverse. Today, more nontheistic people no longer feel ashamed or denigrated for their nontheism. [tweetable]If the military is a microcosm reflection of the larger American society, then it will have to make room for nontheists such as myself, who will not apologize nor hide from our identities.[/tweetable] The military’s purpose is security, defense, protection—not converting people.

CS: Some foreign militaries have Humanist chaplains. What can we learn from them?

JH: Lt. Col. Erwin Kamp in The Royal Dutch Marines has been a true inspiration and a personal encouragement to me. Erwin, and his colleague Norbert van der Kooten, are openly self-identified Humanists and are in prominent command appointments in the chaplaincy of The Netherlands—a NATO country that is allied with America. Erwin and Norbert are my comrades and mentors, as they serve honorably in The Netherlands. [tweetable]They have also been known to point out that, unlike America—which purports to be a bastion and model of freedom—my friends and colleagues in The Netherlands don’t face the same kind of disregard there that nontheists do here.[/tweetable]

JH: It has been my experience that most people I speak to about being a Humanist chaplain have no issue with this notion. It then makes me wonder why the decision-makers seem to have an issue with it. [tweetable]This raises all sorts of questions as to where the external pressure is coming from.[/tweetable]