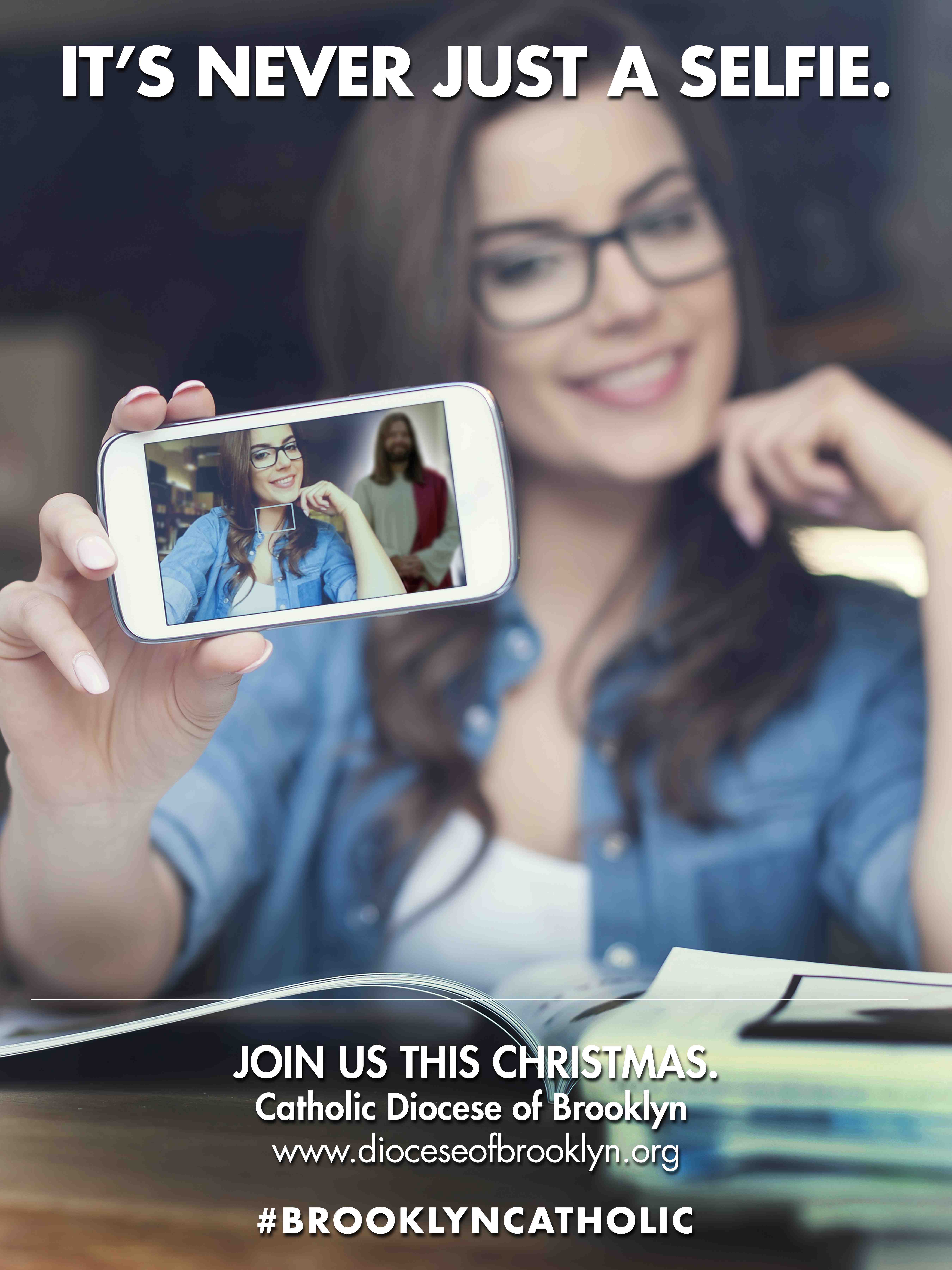 One of several ads in a new campaign by the Catholic Diocese of Brooklyn to invite people to church this Christmas season.
December 3, 2014
David Gibson

One of several ads in a new campaign by the Catholic Diocese of Brooklyn to invite people to church this Christmas season.

'Tis the season, as they say: Peace, joy, light! And of course an abiding sense of persecution every time someone says "Happy Holidays." Just a reminder to check out Rachel Held Evans' classic flow chart to help you determine whether you are actually being persecuted at the holidays. It can save lots of time that you need for shopping.

Provo, Utah, can lay claim to it:

Guinness World Record judge Michael Empric determined there were 1,039 participants in the production, along with a camel, donkey and sheep, the Daily Herald of Provo reported. That tops the record of 898 people last year at a nativity scene in the United Kingdom.

Atlanta megachurch pastor Louie Giglio has a new book out saying that low-church Protestants should recover the Christmas liturgical run-up "as a way to build trust in God when times are hard." Elizabeth Dias of Time reports.

Red State writer Eric Erickson finished his first semester at seminary and has some pointed reflections, worth reading. To wit:

Horrific story via the New York Times, of a massacre of Kenyan miners by Somali Islamic militants of the Shabab network.

The Somali militants methodically separated the Christian workers from the Muslims and took the Christians to the side of a hill, near a gravel pit. Then they ordered the disbelievers to lie face down.

According to the Kenyan authorities, the militants killed 36 people, most of them young men. Many were shot in the back of the head, at close range, and some were decapitated. It appeared all the Muslims had been spared.

Another one of several ads in a new campaign by the Catholic Diocese of Brooklyn to invite people to church this Christmas season.

The Catholic Diocese of Brooklyn (okay, hometown shout-out here) has followed up its much-noted "hipster Jesus" ad campaign from last year with a pretty nifty set of posters inviting people back to church this Christmas. Deacon Greg Kandra flags it at his blog, and you can check out the full set (in addition to the one above) here.

Where will Francis visit during his U.S. trip?

Kids from Detroit are getting Father Tom Rosica to hand deliver invites to the pontiff, and church officials in St. Augustine, Florida, seem confident the pope should visit them, or at least explain why not.

Meanwhile, there's still time to vote in our own online survey of where YOU think Francis should go! Check it out here. We will tally the results and announce the findings next Monday.

You knew it was only a matter of time. Still, it's Off Off Off Off Broadway. The Philippines, actually.

Padre Pio, on the other hand, is getting the full American treatment, as actor Joe Mantegna will play the Italian mystic and stigmatic in a proposed biopic.

BTW, that WaPo op-ed arguing that Francis is actually another Koch Brother? Yeah, it's continuing to get some pushback. Michael Sean Winters, too. Parrhesia, as Francis says.

Cardinal Burke was NOT exiled

"American Papist" Thomas Peters has photographic proof that the former conservative curialist and Francis foe will be bigger and better than ever as patron of the Knights of Malta.

The star of the new "Exodus" movie (because what's Hanukkah without a Passover film?) said that when director RIdley Scott first approached him to play Moses, he checked his performance against biblical films by Monty Python and Mel Brooks:

“It’s very easy when you’re making a film that has this sort of weight to it, you could unintentionally start making ‘Life of Brian’,

“We had takes when it became a bit Monty Python, it was good because we knew we had those red flags.”

Comedian Chris Rock gave an interview to New York magazine this week with many click-worthy comments, one of which was his observation that he doesn'tplay college campuses any more because they are way too "conservative" in the sense of "their social views and their willingness not to offend anybody."

A touring comic wrote to the Dish to distinguish among different colleges:

Then you have the worst two: liberal arts colleges and Christian schools. The two political extremes are the worst. But they’re horrible in different ways.

Liberal arts schools are exactly as Rock describes. Christian schools aren’t bothered by political correctness. They just want their comedy to be “nice.” They get uncomfortable when you’re dark. Who wants nice comedy?

The unnamed comic does say that engineering schools are the best and "Jesuit schools are great, too." I guess because they're not Christian?

India wants its bliss back

As the Washington Post reports, Prime Minister Narendra Modi's new Minister of Yoga, Shripad Yesso Naik, wants to rebrand and reclaim yoga for his country, where the practice was born:

“There is little doubt about yoga being an Indian art form,” Naik said. “We’re trying to establish to the world that it’s ours.”

Then again, they may have to fight American schools for it. If American parents don't repatriate it themselves, as the AP reports in a story on teens getting class credit for yoga.

We started with a Guinness record, so why not circle back:

On Dec. 17, #PopeFrancis birthday.
Expect a 7000 tango dancers flash mob in Rome in his honor.
Should be a #Guiness pic.twitter.com/Lchiyhbmfu

What can you expect from a guy who was given donkey milk as a baby?

(Background: Francis met Wednesday with donkey farmers who donated donkey milk to a pediatric clinic because it seems donkey milk is a good substitute for sometimes problematic cow's milk. Who knew?)

The New Yorker says the German chancellor does a "wicked imitation" of "der papst" emeritus. But she also does Al Gore. There's a connection someplace.

PS: Benedict's own improv talents are a Vatican state secret.

We may have a new Secretary of Defense who "wrote an undergraduate thesis at Yale on the Latin writings of 12th-century Flemish monks," can curse "like a drill sergeant," and was once a counselor on a suicide prevention hotline.

Best of the Rest from RNS:

That's all for now. Good tidings, carry on.