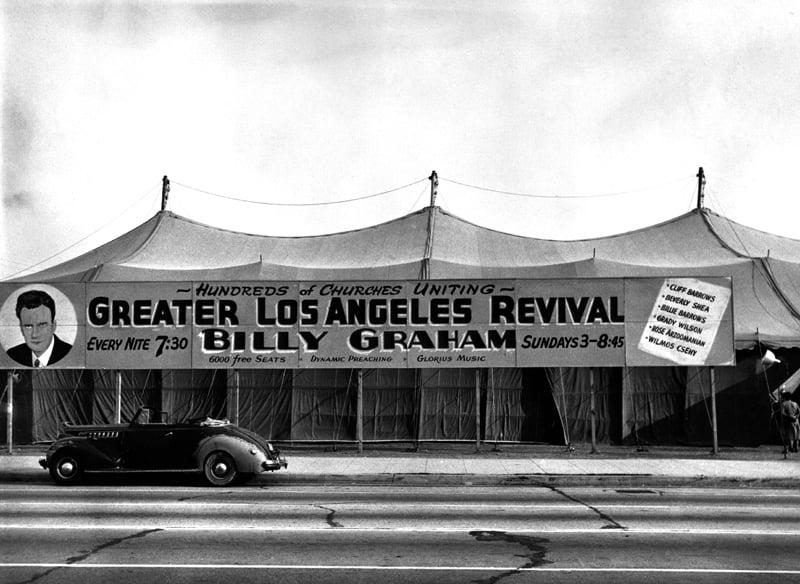 Billy Graham’s 1949 Los Angeles evangelism campaign started small, in a rented circus tent, but grew into a life changing event for Graham — propelling him onto the national stage. Photo courtesy of the Billy Graham Evangelistic Association *Note to Eds: This photo can ONLY be republished with the story “RNS-GRAHAM-LA” written by Cathy Grossman.

(RNS) Two October evenings in 1949 brought together an alcoholic war hero and a fiery young evangelist. From then on, neither would be the same.

The preaching in that rented circus tent in Los Angeles changed Louis Zamperini, then 32 — who put away the bottle forever and devoted the rest of his life to Christian testimony and good works.

And those Los Angeles nights also changed the preacher, Billy Graham, and the future course of American evangelicalism as well. In Graham’s autobiography, “Just As I Am,” he calls that chapter of his life “Watershed.”

On Christmas Day, a movie directed by Angelina Jolie about Zamperini’s extraordinary survival amid the horrors of Japanese POW camps opens in theaters. “Unbroken,” is based on the award-winning book by Laura Hillenbrand.

The film version of “Unbroken, however, ends before he reaches Graham’s tent revival, the climactic chapter of Hillenbrand’s best-seller.

Yet it was this eight-week sin-slaying marathon where the story of “Billy Graham as an icon begins,” said Duke Divinity School historian Grant Wacker. He’s the author of “America’s Pastor: Billy Graham and the Shaping of a Nation,” published just before Graham’s 96th birthday last month. Billy Graham’s fiery preaching and celebrity converts such as war hero Louis Zamperini at the 1949 Los Angeles evangelism campaign, propelled Graham to national attention. Photo courtesy of the Billy Graham Evangelistic Association. *Note to Eds: This photo can ONLY be republished with the story “RNS-GRAHAM-LA” written by Cathy Grossman.

Every element of what became the Billy Graham Evangelistic Association’s crusade juggernaut came together for the first time in this early campaign, said William Martin, author of the acclaimed biography, “A Prophet with Honor.”

Graham didn’t invent these trends, but he pulled them together to knit a new creation — the prototype evangelistic crusade as a religious, social and political force.

What you see him doing in Los Angeles he began to do all the time — “recognizing and amplifying patterns already at work,” said Wacker.

A genius for networking: Long before that term became a verb, Graham pulled together contacts from his early preaching days with Youth for Christ, the powerful Christian Businessmen’s Committee of Los Angeles, and hundreds of local pastors to support the heavily advertised L.A. campaign.

Personal magnetism: Graham may have been the first evangelist to pace the pulpit with a lapel microphone like a modern talk show host. With a commanding voice, the tall and movie-handsome evangelist seemed to connect eye to eye, ear to ear with every person in the tent.

Celebrity power: The willingness of famous men such as Zamperini and radio host Stuart Hamblen to testify to their “born-again” experience led to massive crowds in Los Angeles. By 2005, when Graham retired from the sawdust trail of evangelizing, it became impossible to count the celebrities who found faith through Graham. On the cover of “Just As I Am,” Graham wears a denim shirt, a gift from Johnny Cash. Years later, critics say he allowed his moral stardust to brush onto the coats of some arguably undeserving folk as well, including close friend Richard Nixon.

The outlines of what became the 1980s religious right can be seen here, too, said Susan Harding, a retired anthropology of religion professor at the University of California, Santa Cruz, and author of a book on the late Jerry Falwell’s rise to cultural power.

“Graham was not just becoming a great evangelist, he’s becoming an evangelist with a political profile,” said Harding, noting Graham’s talent for “riding the crest of the moment.”

Equating the American way with godliness: “He was speaking to — and from — the heartland’s moral world. He personified the moral dimension of a Norman Rockwell world of small towns and summer nights — and a clear overlay of right and wrong. He delineated the strongly normative path to salvation for individuals and for the culture,” said Wacker. Los Angeles not only changed Graham, but also his audience.

“He had preached 65 sermons to an aggregate audience of 350,000 — maybe 400,000 — souls jammed into a Ringling Brothers tent pitched near the city’s central shopping district. The meetings ran every night and Sunday afternoons from September 25 to November 20. Around 6,000 people either committed or recommitted their lives to Christ. Graham spoke to countless civic, school, and business groups, making three to four appearances a day. He gave dozens of interviews. He even schmoozed with Hollywood celebrities such as Cecil B. DeMille, Spencer Tracy, and Katharine Hepburn.”

By the time the Los Angeles campaign ended, Graham was rocketing to national and international acclaim.

“Everywhere we turned, someone wanted us to come and do for them what had been done in Los Angeles,” Graham wrote in “Just As I Am.” No longer could he see himself as a “country preacher” leading “a little evangelistic team.”

He codified the lessons of California, established the Billy Graham Evangelistic Association and eventually made it a powerhouse of efficiency across multiple platforms — print, broadcast, film, interviews and, of course, more than 400 crusades.

Los Angeles fame opened doors for Graham to a different level of people and power: presidents and the national press.

“People want to come and hear a person who is famous,” said Martin, a religion and public policy fellow at Rice University’s Baker Institute. Had it not been for the 1949 national exposure, “he would have been a one-night wonder.”

By 1957, Graham could pack Manhattan’s Madison Square Garden for weeks on end. 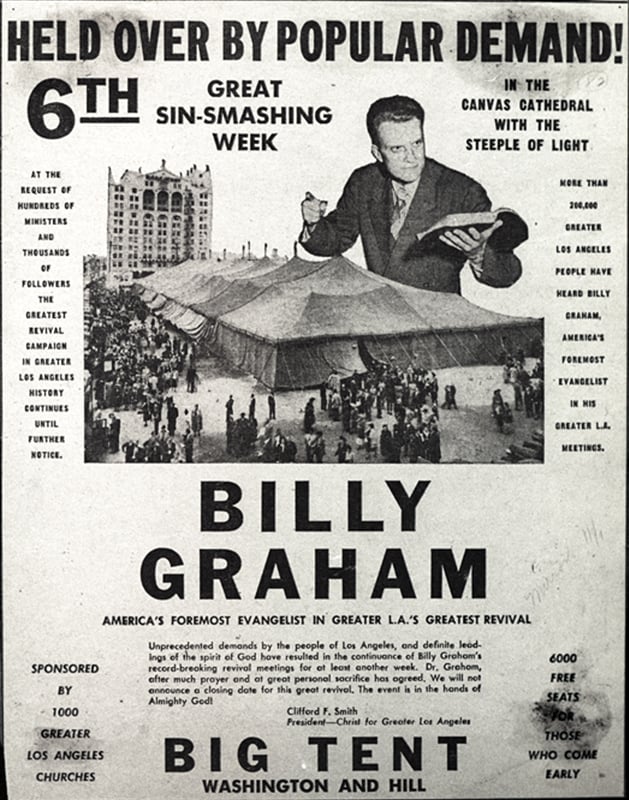 Billy Graham’s 1949 crusade in Los Angeles was originally planned for three weeks but ballooned to eight with media attention — and famous conversions. Poster image courtesy of the Billy Graham Evangelistic Association *Note to Eds: This photo can ONLY be republished with the story “RNS-GRAHAM-LA” written by Cathy Grossman.

And by then, he had the staying power to withstand critics from his fundamentalist early years when he began opening ecumenical doors, first with Catholics, later with Jews.

“What Graham did was normalize the idea that you can cooperate with others,” Wacker said, “He wanted to retain a core of belief without breaking fellowship with everyone else” who believed in God and Christ, moral values and patriotism. He represented the possibility of a consensus, of a bridge.”

He shifted from firing “turn-or-burn” thunderbolts to a mesmerizing, almost crooning, invitation to people to step toward the pulpit and change their lives by seeing them differently, through the prism of a new relationship with God.

“Words. That’s all he’s got,” said Harding, describing the power that Graham mastered so early on.

“No ritual. No liturgy. No paperwork. Graham speaks the gospel, and invades the listeners’ minds to strip away their old ways of understanding and experience. He adds their life up anew and asks them to tell their life stories from now on in gospel terms.”

On the night of Oct. 23, Zamperini heard Graham say: “If you suffer, I’ll give you the grace to go forward.”

Hillenbrand, drawing on more than 70 interviews with Zamperini for “Unbroken,” tells how he recalled all the miraculous moments when his body might have broken and yet did not.

But on that night, Zamperini’s broken soul was touched. He walked down the sawdust aisle toward the Graham.

Over the next six decades, hundreds of thousands heard those words and did the same.

“God has spoken to you,” Graham said then, and ever after. “You come on.”