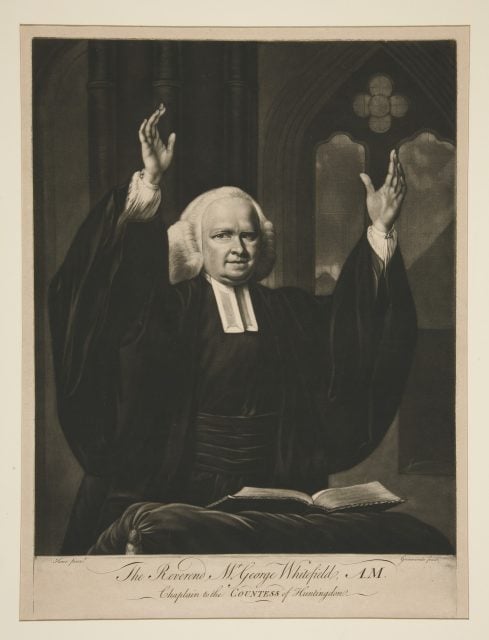 George Whitefield, hailed by scholars as the best-known evangelist of the 18th century.

(RNS) If YouTube had existed in the 1700s, George Whitefield, hailed by scholars as the best-known evangelist of that century, would have been all over it.

Whitefield (pronounced WIT-field), who was born in England 300 years ago on Dec. 16, 1714, is regarded as a catalyst for the First Great Awakening. Here are five reasons why he remains a potent influence and a cautionary tale for U.S. evangelicals:

1. He was the master of mass media.

“A major part of his success is that he mastered the new media of his day,” said Thomas S. Kidd, author of the new book “George Whitefield: America’s Spiritual Founding Father.” Whitefield’s sermons and theological thoughts were spread broadly through newspapers, journals and prolific letter-writing.

Unlike many journal-writing Puritans who came before him, Whitefield chose to share his journals publicly.

Future evangelists — most notably Billy Graham — followed a pattern set by Whitefield of making the most of the media available in their time.

Media coverage of Whitefield wasn’t all favorable, but it expanded his fame beyond the thousands who sometimes heard him preach in churches in England and in fields in New England.

“Between 1739 and 1742 total output of colonial presses doubles and the whole new half is all Whitefield: It’s all Whitefield or anti-Whitefield,” said Kidd, a history professor at Baylor University, which held a symposium on the itinerant evangelist in November.

Actors felt threatened when Whitefield, an actor-turned-evangelist, decided to build a church called the Tabernacle in London just down the street from the theaters.

“He’s lampooned in really popular plays, the most famous being the ‘Dr. Squintum’ play, which is just a total sensation in Britain,” said Kidd of Whitefield, who was cross-eyed after a childhood ailment.

He had rotten eggs, turnips and stones thrown at him and once was saved from a stoning by his beaver hat, wrote Kidd. 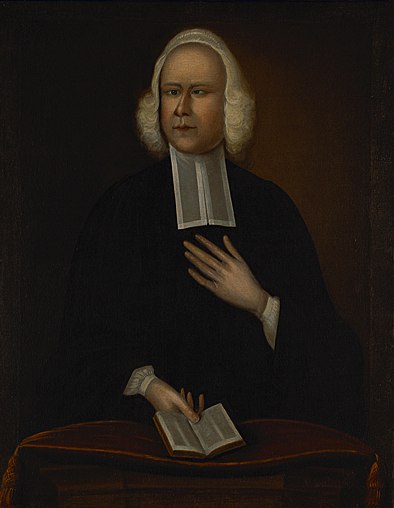 Portrait of George Whitefield, attributed to Joseph Badger, circa 1750s.

In his early visits to the U.S., Whitefield condemned the beating of slaves by their masters and encouraged evangelizing slaves. But he later became a slave owner.

“I think he probably shares in some respect the sort of failure … of evangelicals as well as the larger culture to understand the horrors of slavery,” said Haykin, whose seminary held a conference on Whitefield in October. “He was the man directly responsible for the introduction of slavery into Georgia.”

Some scholars wonder what difference Whitefield could have made if he had condemned slavery — as fellow evangelist John Wesley did after Whitefield’s death in 1770.

“No one was more influential than Whitefield at the time. What if he had crusaded against slavery instead of advocating for it?” wrote blogger Alan Cross, author of “When Heaven and Earth Collide: Racism, Southern Evangelicals, and the Better Way of Jesus,” in SBC Voices. “Would the United States have begun differently 30, 40 years later?”

4. He fostered friendships with influencers.

Just as Graham became an adviser to presidents and made connections with sports figures and Hollywood’s elite, Whitefield surrounded himself with influential people in the secular world — including Benjamin Franklin in the 1730s.

“He was far more famous than Franklin when they first met,” said Kidd of the mutually beneficial relationship that lasted for decades. “Franklin kind of hitches his wagon to Whitefield’s star.”

Across the Atlantic, the evangelist befriended members of the British aristocracy.

“Whitefield had connections even within the royal family in Britain,” said Kidd. “At one point, Whitefield was getting death threats and got an order from the king to investigate the situation.”

5. He disagreed with other evangelicals.

The battles that continue between Calvinists and non-Calvinists erupted between Whitefield and Charles and John Wesley, who like Whitefield were Church of England ministers who started the Methodist movement.

“His most famous falling out is with John Wesley and it’s over theology,” with Whitefield in the predestination camp and Wesley believing in free will, said Kidd. “He just was constantly falling out with other evangelical leaders and in some ways creating a pattern that persists through today.”

In the end it was Wesley and Jonathan Edwards, another key leader of the Great Awakening, who became better known through the ages: Wesley had the legacy of the Methodist denomination, while Edwards’ theological writings remain influential.

“His brilliance was in that moment,” Kidd said of Whitefield.