(RNS) A Belgian bishop who has been touted as a future leader of that country’s Catholic hierarchy is making waves by urging the church to find ways to recognize gay relationships in which “exclusivity, loyalty, and care are central to each other.” 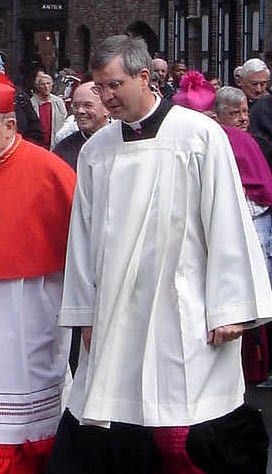 “There should be recognition of a diversity of forms,” Bishop Johan Bonny of Antwerp said in an interview in late December with a Flemish-language newspaper.

“We have to look inside the church for a formal recognition of the kind of interpersonal relationship that is also present in many gay couples. Just as there are a variety of legal frameworks for partners in civil society, one must arrive at a diversity of forms in the church.”

Bonny did not spell out exactly what sort of rite he had in mind for sanctifying same-sex relationships, but he made it clear he thought the church needed to explore the issue as part of a shift to a much more welcoming approach to gays and lesbians.

“The intrinsic values are more important to me than the institutional question. The Christian ethic is based on lasting relationships where exclusivity, loyalty, and care are central to each other,” he said, according to a translation of his remarks by the National Catholic Reporter.

“Personally, I find that in the church more space must be given to acknowledge the actual quality of gay and lesbian couples; and such a form of shared-life should meet the same criteria as found in an ecclesiastical marriage,” he said.

Gay and lesbian Catholic activists responded enthusiastically to Bonny’s statements, which have continued to attract attention and — not surprisingly — criticism.

“Excellency, what you propose is not Catholic,” the Flemish Catholic Student Association wrote in an open letter quoted by The Tablet of London. “The rules of morality apply universally to every Catholic, everywhere and always.”

What’s not clear is how this controversy will play out in the new dynamic of church reform that Pope Francis has pushed since he was elected nearly two years ago.

Bonny has a doctorate in theology from the Gregorian University in Rome, and he sent a long letter to Francis ahead of a major Vatican summit on family issues in October in which he urged the church to adapt its  policies to be more inclusive of gays and of divorced and remarried Catholics.

Bonny has been tabbed as a possible successor to Archbishop Andre-Joseph Leonard of Brussels, head of the Belgian hierarchy and a vocal conservative who is set to retire in May when he turns 75.

“Do not underestimate the significance of this,” Rik Torfs, a canon law expert and rector of the Catholic University of Leuven in Belgium, told NCR. “Bonny advocates a change from principles long held as unshakable, something no bishop could have done under the dogmatic pontificates of Pope John Paul II and Pope Benedict XVI.”

The Rev. James Martin, a Jesuit author and commentator at America magazine, also noted that Bonny’s comments reflect a wider debate going on within the highest levels of the Catholic Church about how to minister to gay Catholics.

“So we shouldn’t overemphasize what Bishop Bonny is saying: after all, he’s only one bishop,” Martin told the Huffington Post. “On the other hand, we shouldn’t underemphasize it either: it’s quite revolutionary.”

How the church responds to LGBT Catholics is taking on more importance in places such as Belgium, which allows civil marriage for same-sex couples, and in Florida, which on Tuesday became the 36th state in the U.S. to allow it. While Miami Archbishop Thomas Wenski warned employees not to signal any support for gay marriage either on or off the clock, Bishop Robert Lynch of St. Petersburg took a different tone.

“I do not wish to lend our voice to notions which might suggest that same-sex couples are a threat incapable of sharing relationships marked by love and holiness and, thus, incapable of contributing to the edification of both the church and the wider society,” he wrote in a column for the Tampa Bay Times.