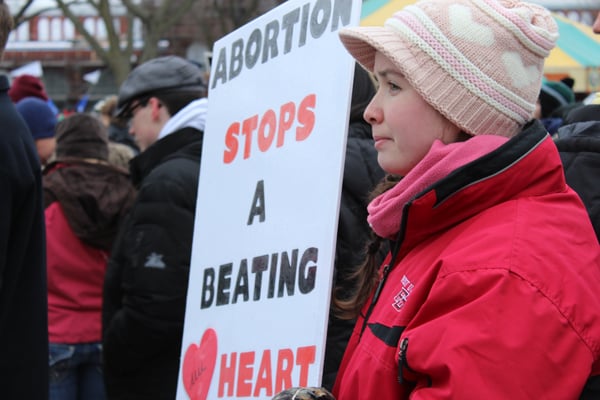 Laura Meyer of Manchester, Ohio, holds a sign during March for Life in Washington, D.C., on Jan. 25, 2013. RNS photo by Adelle M. Banks

WASHINGTON (RNS) Abortion politics are never very far beneath the surface in American life, but every year around the anniversary of the Supreme Court’s landmark Roe v. Wade decision, handed down Jan. 22, 1973, they take center stage.

Thursday’s annual March for Life will draw more than 100,000 demonstrators to Washington. Religious conservatives will march in protest, firm in their belief that abortion should not only be considered a sin, but also a crime.

And religious liberals, though often skeptical about the morality of abortion, will affirm their belief that a decision to end a pregnancy should be left solely to a woman, her doctors and her conscience.

In the years after Roe v. Wade, most evangelicals came alongside the Roman Catholic Church to oppose legal abortion. Mainline Protestants, at least among denominational elites, strongly advocated for abortion rights, even though mainline clergy are evenly divided on the legality of abortion and do not talk about it much.

But while conservative religious activists at the March for Life and progressive religious leaders supporting the Religious Coalition for Reproductive Choice do speak for a subset of the people they purport to represent, the absolutism of polarized activist elites betrays the more ambivalent views of rank-and-file Americans.

Interest groups for and against abortion rights may have a stranglehold on our political parties and presidential nominations, but Americans, whether religious or secular, persist in our conflicting views on an issue fraught with moral dilemmas and vexing questions about the separation of church and state.

Formulaic media reports about abortion politics rarely dig beneath the surface to reveal how people of faith defy the stereotypes and easy labels that persist about them.

Evangelicals, who overwhelmingly believe abortion is wrong, actually have quite varied opinions about the legality of abortion. The Pew Research Center reports that nearly a third (31 percent) of white evangelicals believe abortion should be legal in all or most cases. The March for Life protesters want the Supreme Court to overturn Roe v. Wade. But 42 percent of white evangelicals do not want the decision overturned.

Evangelicals who attend church weekly are no doubt more stridently committed to the criminalization of abortion than evangelicals who do not, but there is more diversity of thought than movement leaders like to acknowledge.

Among religious traditions, mainline Protestants are more permissive, with positions ranging from reluctant to full-throated support for abortion rights. The United Methodist Church has the most muddled position of all, reflecting the vast ideological diversity of the nation’s largest mainline denomination. Each successive quadrennial UMC General Conference adds language supporting measures such as abortion restrictions and crisis pregnancy centers.

And while United Methodists are embroiled in intractable debate over the place of gays and lesbians in the church, with vocal and well-funded caucus groups on both sides, abortion is not a highly salient issue being debated in a denomination that claims everyone from George W. Bush to Hillary Clinton.

Take, for example, the organization Lifewatch, a dedicated band of anti-abortion Methodists who add their voice to the small mainline presence in the March for Life, which is dominated by Catholics and evangelicals. The group has an unsophisticated website and lacks a budget, office or social media staff. Lifewatch is a labor of love by two pastors and a handful of lay volunteers.

Yet each year on the morning of the March for Life, Lifewatch convenes for a simple prayer service inside the United Methodist Building,  a building across the street from the Supreme Court and the U.S. Capitol that’s long been the epicenter of religious support for abortion rights.

The religious spectrum on abortion is much more nuanced than the media coverage or activists’ signs lead you to believe. Most Americans understand that a properly formed Christian conscience cannot countenance the destruction of human life at its most vulnerable. But not all are ready to criminalize the procedure and drive up demand for a dangerous black market and self-abortive devices and drugs.

Protestant leaders have largely been co-opted by the extreme positions of the political parties and interest groups. Mainline liberals will not sanction even sensible abortion restrictions that enjoy broad public support. The Christian right, meanwhile, refuses to support a range of policies that would reduce the incidence of abortion, from contraceptive access and sex education to greater economic support for low-income families and pregnant women.

Thankfully, a new generation of Christian thinkers is helping to recast the abortion debate beyond its tired and inflexible structures. Elizabeth Stoker Bruenig promotes a theologically rigorous pro-life, anti-poverty ethic to reduce abortion rates, all from a self-proclaimed “Christian leftist perspective.” Fordam University professor Charles Camosy has a forthcoming book, “Beyond the Abortion Wars,” that promises to be especially helpful. It’s worth noting that both are devout lay Catholics who eschew party labels.

American attitudes toward abortion are largely unchanged from a generation ago. The angriest voices still get the most attention. But off the front pages, the debate is changing. People of faith are challenging old assumptions and embracing new and more compelling ways to reduce the number of women who face a difficult choice and to increase the number of children born to families able and willing to joyfully receive them.