The Bible has long been the most printed, most distributed, most widely read and bestselling book in North America. (Eat your heart out, Veronica Roth.) A new study by the American Bible Society shows which cities are most “Bible-minded” in 2015, and the list contains a few surprises.

New York City, a city becoming known for its increasingly robust Christian community, fell into the bottom 10 for the first time in the study’s three year history. Though Knoxville, Tennessee topped the list in 2013, the small city dropped out of the top 10 this year. Dallas, Texas–rife with mega-churches and Christian institutions–did not make it into the top 25 this year. And pastors looking for a Biblically literate flock might want to head to Birmingham, Alabama; the city took first place.

Here are a list of the study’s top 10 most Bible-minded cities:

Despite the surprises, the study included some predictable findings that reinforce what one might assume to be true. The Bible belt continues to live up to its nickname; almost all of the top 25 cities are located in the Southwest or Southeast. Also, smaller cities generally fared better than larger ones. This is consistent with the fact that larger cities tend to be more liberal, politically and religiously.

According to the study, “Bible mindedness” is determined by residents’ Bible reading habits and beliefs about the Bible. Those who have read the Good Book in the past seven days and strongly believed in the Bible’s accuracy were considered most Bible-minded. Only 27 percent of the overall population fell into this category.

“This study provides us with a great starting point to understand where people are interacting with Scripture and what their views are of the Bible,” said Andrew Hood, managing director of communications at American Bible Society.

The survey was collected by Barna Group from a sample of 62,896 adults and was conducted over a 10-year period, ending in August 2014. 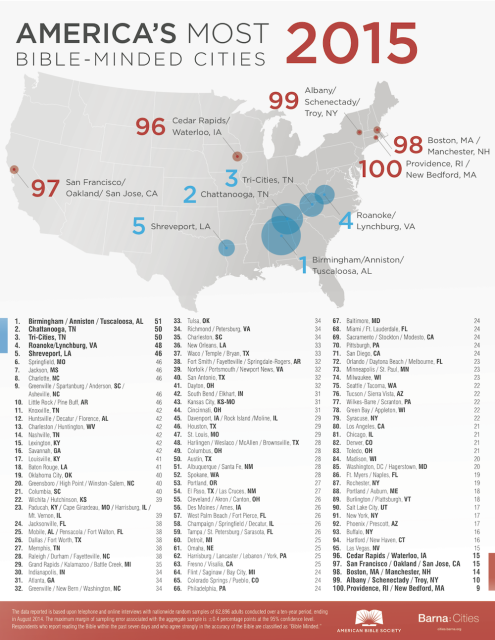