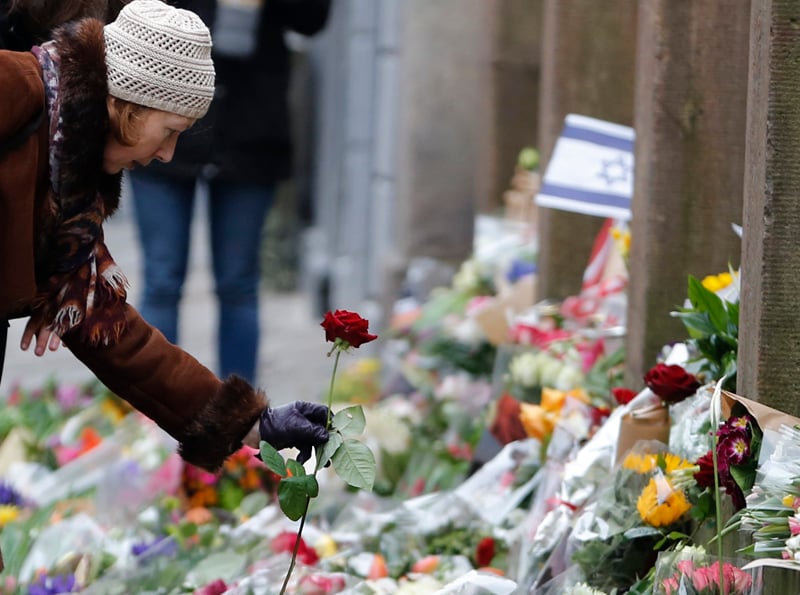 A woman lays down a flower at a memorial for the victims of the deadly attacks in front of the synagogue in Krystalgade in Copenhagen, on February 16, 2015. Photo courtesy of REUTERS/Leonhard Foeger *Editors: This photo may only be republished with RNS-DENMARK-SHOOTING, originally transmitted on RNS-DENMARK-SHOOTING.
February 17, 2015
Reuters

COPENHAGEN/PARIS (Reuters) Israeli Prime Minister Benjamin Netanyahu's calls for Jews to move to Israel after attacks in Paris and Copenhagen may strike a chord with thousands of French Jews but will likely fall on deaf ears in Denmark.

While French Jews are moving to Israel at an unprecedented rate, Danish Jews embrace their country.

Denmark has a generous welfare system and a healthy economy, and Sunday's attack on a synagogue may do little to change the loyalties of Danish Jews.

One guard died on Saturday when a gunman attacked a Copenhagen synagogue, which followed a shooting at a cafe hosting a conference on free speech. The incidents came less than a month after 17 people were killed in Paris when Islamist gunmen attacked the satirical weekly Charlie Hebdo and later targeted a Jewish supermarket.

The Jewish Agency said 12 Danish Jews migrated to Israel in 2014, compared with 17 the year before, despite worries about growing anti-Semitism.

In contrast, more than 7,000 French Jews made Aliyah, or emigrated to Israel, in 2014, up from 3,400 in 2013, for reasons that community leaders say range from a weak economy to fear of attacks and harassment in the street.

"It's not a dangerous anti-Semitism. It's spitting, cursing, like that," Copenhagen Chief Rabbi Jair Melchior told Reuters.

Denmark has welcomed Jews for centuries and most of the community survived the Holocaust, despite Nazi occupation, as Danes helped them flee to safety in neighboring Sweden -- often after being given shelter in Danish households despite the risks.

"Denmark has a very good history of taking care of the Jewish community going back to the Second World War, when the Danish experience stands out on a European scale," Dan Rosenberg Asmussen, chairman of the Danish Jewish Community, told a news conference.

"So we want to stay in Denmark."

There are about 7,000 Jews in Denmark. Even the few who have left for Israel feel nostalgic for the comforts of Denmark, where people enjoy parental leave and pensions that are the envy of the world.

"Denmark is a very generous society," said Deborah Chason, 66, head of the Association of Danes in Israel. "They have everything there. I understand why people would not want to leave."

In Jerusalem since 1986, her Danish pension is still more than she gets from the Israeli government.

Ties may be looser in France, which has the largest Jewish population in Europe, having grown by nearly half since World War Two to total 550,000. Many Jews from regions like North Africa say they feel outsiders from mainstream France.

Denmark has suffered some anti-Semitic incidents and many still remember when the Copenhagen synagogue was damaged in 1985 by Palestinian militants who detonated bombs around the city.

But that may pale in comparison to France.

Violent incidents such as the murders of three Jewish children and a rabbi by Islamist militant gunman Mohamed Merah in 2012, or a bomb attack against a Kosher supermarket the same year, sent shock waves through the Jewish community.

Jewish groups say there are hundreds of smaller anti-Semitic incidents every year. Only recently, several hundred Jewish tombs were recently damaged in a cemetery near the French city of Strasbourg,

"In 10 years, there will be no more Jews in France," said Nahman, a 30-year-old plumber who asked not to give his full name. "People are being killed because they're Jewish, but that's not the main thing -- it's the dirty looks, the insults and harassment in the streets if we identify as Jews."

Nahman added that in eight months, he planned to relocate to the French-speaking Netanya neighborhood of Tel Aviv.

He is still in a minority. Bruno Smia, president of the Jewish community in Saint-Mande, a Paris neighborhood near the attacked Jewish supermarket, says far more Jews entertain the prospect of leaving than act upon it.

"Many come and ask me about Aliyah, but I don't see huge numbers leaving."

In Denmark, few would even ask.

"We went back to normal already this morning by having a regular morning prayers," Rabbi Melchior said. "I'm not frightened to be a Jew in Denmark." (Writing by Alistair Scrutton; Added reporting by Luke Baker in Jerusalem; Editing by Giles Elgood)

Related Posts
By Julia Lieblich, Luc Vachez
France’s ‘hip’ female rabbi draws Muslims, Christians and Jews in a time of crisis
By Jim Wallis, Sandy Ovalle
Savor and strategize: The SCOTUS decision to protect DACA
By Jeffrey Salkin
What religion is Dylan now?
By Marlena Graves
We reversed Trump’s immigration policy once. We’re back to fight ‘Remain in Mexico.’
By Menachem Wecker
Pandemic forces Jews to be flexible on ritual circumcisions